Bill and I were up at 6:45 on Monday, Apr. 30th and how wonderful to wake to another sun filled sky! Our first agenda after a coffee and tea was to hop in the truck and drive into Durham to get fresh water. Rob and Pat are kind enough to offer us a top up whenever we need it, until we can get into the Acreage.

We’re pretty sure, after working around there yesterday (Sunday) that the ground is hard enough for the truck but we’ll do this in town one last time.

We caught R & P just as they were ready to head out for an appointment so had a brief chit chat. Our water hose had a couple of icy sections but with a little twisting and bending, Bill was able to fill our 45-gallon bladder. While he did that, I took the camera and walked along their street. They are right across from the river and it is always fascinating to watch how fast it flows. Pat’s tulips are coming up nicely in her front garden, yay spring. 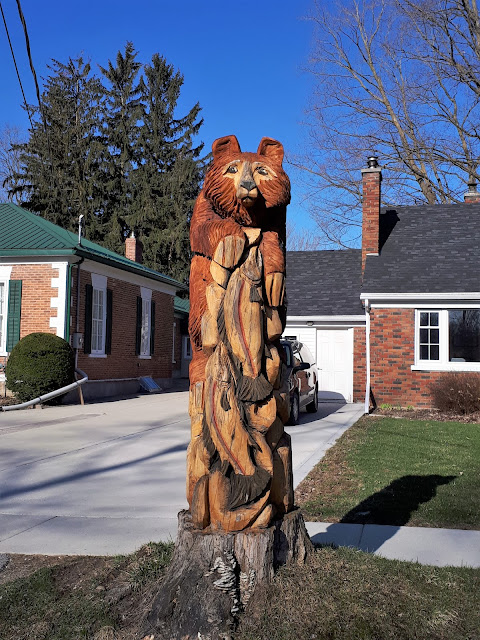 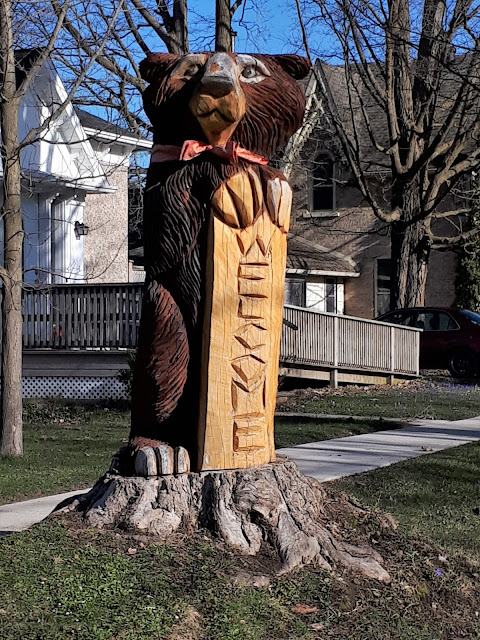 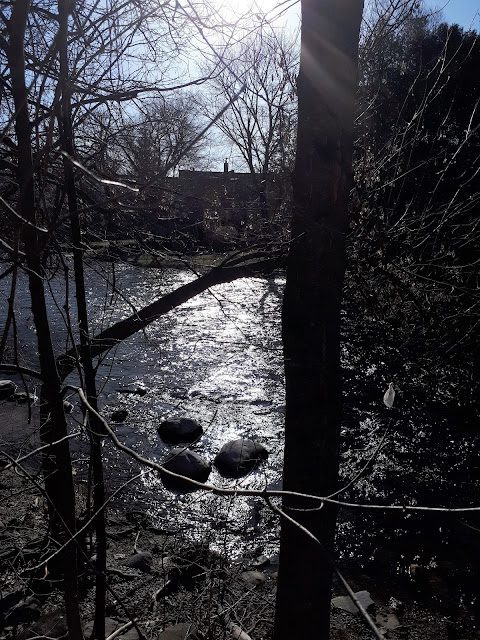 When we left there, actually, I think it was before, we went to FS to get fill our propane tank. Prices have gone up from $37 to $42 so that always hits the pocket but when it is something you need, you pay the price and grumble later. Not much we can do about it. Propane never goes on sale. We scooted home and Bill hooked the tank up. Today is our first garbage day, this year, so we had dropped the bag and our recycling bin at the road. Can’t remember when they come by but it was still sitting there when we returned.


At 10 we had an appointment in Hanover at Mom’s bank so drove back through Durham with the car this time at 9:30. It is always good to chat with her investor and make sure we are on track with Mom’s investments. We don’t gamble at all, playing it safely, just moving them around when they come due to gain the highest interest, sensibly. The garbage/recycle truck had been and gone so I got out and walked the bin up the lane.


Back home by 11:30 we needed to eat something. We had run out of eggs and I forgot to pick some up. Darn! Since it was almost noon I warmed up the leftover mac and cheese for Bill and my last bowl of bean soup for me. Seemed like a good idea at the time but by the time we changed into ‘work’ clothes, my tummy was upset. Sometimes the combination of what I eat don’t get along but I put it out of my mind and went down to the wood/swamp area with Bill. 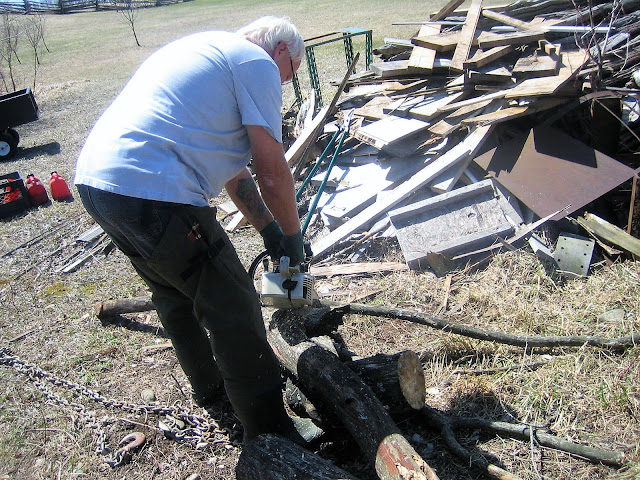 The goal today was to pull out the old dead trees that had fallen down over the years and get them cut up for burning. This is still one of those jobs that don’t ‘have’ to be done, but we think it improves the look of the property by cleaning up the ‘crap’. It was a good day to work and Bill set to work by going further in to get to the prone trunks. Apparently, the black gungy water was appealing because it wasn’t more than 10 minutes and Bill tripped on some viney twigs and went down.

Oh my! My first concern, of course was how he was falling and I couldn’t do anything to assist so just watched and captured a mental picture. Luckily, he was able to keep his face up out of the muck but the rest of him was soaked. He had nothing in his jeans pocket, thank goodness and his Fitbit was covered and protected by the gloves he wore. Well, time to change! As I stepped out of my position, I also managed a soaker so needed to get us both outfitted in boots.

Bill donned other clothes and pulled on our hip waders and I slipped on my rubber boots. Back to the swamp we went. I didn’t have the energy today that I had the previous day but still managed to help pull the branches out after he cut them with the chainsaw. With my small trimmers, I clipped more of the red growth that spreads up everywhere, making it difficult to walk. I don’t know what it is but it is a pain in the you know what!

After 3 hours, I was done and I know Bill would probably have kept on going if I hadn’t quit. We cleaned up our mess and as he was ready to drive the garden tractor out, he noticed a flat tire. This is the same tire where he had to replace the tube on last summer. Geesh! He used his new air compressor to fill it enough to get it up the hill into the shed. We’ll have to get that fixed before grass cutting.

I sat outside with Clemson, still noticing I was feeling uncomfortable. Bill and I both needed showers as we were going out for dinner but I just sat for a bit before Clemson and I went down to collect the mail. For once, he followed me all the way down, a little slower, but if I keep saying daily ‘let’s go get the mail’, he’ll catch on like he did last summer. I love it when he walks with us down the lane. He still has his sweater on and he is not shivering as much.

We each had our shower, got cleaned up and drove to the other side of Chatsworth to Kettles, a great family style restaurant. We met Donna, Gerry, Gayle and John there for dinner. Since moving up here, we like to get together to celebrate birthdays. This time it is for Gerry, whose birthday is today, Apr. 30, and John’s whose birthday is May 2nd. Privately, Bill and I shared our own celebration for our upcoming anniversary. I think that is the second time we’ve done that already!

We had a nice meal for a reasonable price and because Bill had to head out in the morning, we declined joining the rest afterwards at Gayle and Johns for a nightcap.

Yes, Bill is getting back into the work routine. I need the time alone, so I can purge my closets for an exchange coming up on Saturday, but I will miss him mostly in the evenings.
This has been a good day all around. Some work, some play, some business and good times with family. I hope you can say the same! Clemson wanted attention, someone to sit with when we got home, so I left my blog post until today. I hadn't even started writing it. Priorities you know!

Thanks for reading along and if you wish to leave a comment, I will respond accordingly.