I had a really good sleep last night and early this morning. Once I dropped off, I never heard a peep, nor did I hear Clemson and Bill get up at 3 for a piddle. This morning, Thursday, Apr. 11th, I woke and rose by 7:15. As I was getting dressed, the silence I heard changed to sleet hitting the roof. I know it was going to be a cold day and I had faith that none of the white stuff would arrive and stay.

Bill was downstairs with his coffee, having got up an hour earlier. I made my tea, no walk again, thank you very much. We read some blogs and mid-morning we had our showers and made some breakfast. Bill is scheduled to work this afternoon and I don’t have plans to be outside other than letting our 4-footed furry lovebug out. It is only 36F/2C with a very strong wind, you probably already know it is bitterly cold.

There were a few things that needed to happen today. Most importantly, we have a friend coming for dinner. I could say “Guess Who’s Coming to Dinner?” but you don’t know him so no point in adding suspense. A friend of Bill’s who he met through his RC flying hobby. Now, Keith is a friend of mine too and we are happy to have him join us. It gives us an opportunity to spruce up our meal! Keith is tossing around the idea of spending some of his winter in the Arizona area so I’m sure that will be part of tonight’s discussion.

We puttered around in the morning, and Bill tucked Clemson and I in with my afghan before he left just before noon. Eventually, I roused myself and got to work. I vacuumed the Suite and used a Murphy’s Oil wipe on the kitchen cupboards. I love the difference it makes, worth the extra step for sure. I wanted to make a nice supper so began with dessert. I prepared Rhubarb Crumble to put in the convection oven around 5.

Everything else was planned in my head so I sat and finished Simple Genius. It is a great page turner with twists and turns. Then, I did some crocheting with a new ball of chunky wool I picked up at Len’s Mills Store.  With the cold wind, it was more difficult keeping the Suite at an even temperature. We let the furnace cycle through a couple of times and then relied on our Blue Flame. 15-amp service isn’t enough to use our fireplace but we managed to stay comfy.

Bill was home shortly after 5 and I started sautéing beef roast in the Instant Pot at 5:30. I added 3 whole potatoes and onions and let it cook for an hour, 15 minutes natural release and then manual release. Perfect! We had picked up a few packs of frozen veggies in Yuma in February and I had peas and carrots left. They were on sale and great when you want to cook the whole pack. Just put the pack in the microwave for 5 minutes and voila! No dirty dish.

The roast was done releasing pressure when I put the oven on but forgot to wait until the peas cooked before turning the Sauté feature on to make gravy. Crap! I tripped a breaker. I finished the gravy on the stove and because no one was home, we switched our inverter and used our batteries. I felt bad because Kirk uses that same outlet for something in the barn. Supper was delicious, the roast fork tender again.

The boys and I talked winter travels, planes, hobbies and life in general while I cleaned up the dishes. One pot meal! Just wonderful! Bill brought up Google maps on my laptop and projected it to the tv screen while Keith made notes of ‘key’ places to visit in the southwest. He’s hoping to travel for a couple of months this winter. He sounds really keen on some of the suggestions we gave him. It was nice for me to get to know him better and we all enjoyed an evening together. The Wolf Blass that Keith brought went down really nicely. 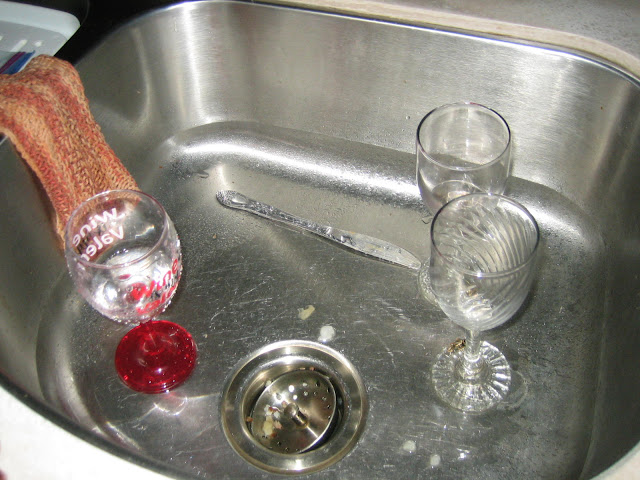 We were all surprised at the time when Keith got up to leave. His little baby pooch, Oreo, would be wondering where Daddy was. It was 11 o’clock! What a great visit. We hugged goodbye with hopes of seeing him again during the Ontario summer. Bill and I were in bed 15 minutes later, with this post delayed until morning.


What a wonderful easy going day for me! Thank you for YOUR visit too!

Posted by Patsy Irene (Chillin' with Patsy) at 7:04 AM