I don’t know if it was excitement or the tea we had at 6:30 last night at supper, but even though we first felt tired when we crawled into bed, sleep didn’t come. Bill said the coyotes were singing when he took Clemson out and we heard them again at 11. Then I noticed he had drifted off but I watched the clock roll until 11:45. Next thing I knew it was 6 and Bill was getting up.

I rolled over when Clem also jumped off the bed. At 6:30, I joined my boys downstairs. It was a cold morning but the rain had stopped sometime overnight. We had our morning brew and got washed.


I wanted to put a clear coat of paint on the slate rock that I painted and leave it with a bottle of wine for Kirk and Kate. It is an amateur job but it’s the thought, right? We appreciated their generosity this past week.

We were pulling out of their farm at 7:30 after leaving their gift in their garage. We had filled up Black Beauty last night at the Flying M, just down the street before arriving home. The price was excellent (for here) at $1.14/litre but this morning drove to the east side of London and dumped at the Flying J for a mere $5 with our Good Sam card. It was on our way. Thank goodness we knew better than to get fuels here, you can see the outrageous price.

Now we were truly on our way and it was 8:15 am. The drive was uneventful, dry weather but a typically cold Ontario day. As we drove the 401 highway (equivalent to US Interstate) we waved at Ken and Kim (enter web page) in Ingersoll. Woops, I texted their US cell instead. LOL.

Our Exit 222 followed soon after and we followed familiar roads around the outskirts of Stratford, Bill’s former home town, towards home.


Our buddy Pat and my sisters texted to advise us of the light wet snow that was falling in Durham, Hanover and Chatsworth. Nothing to worry about, there is no stopping us now! Well, I say that and we DID need to stop at an FS Express at Milverton for a ‘p’ break. All of us. Now, we don’t have to deal with that as soon as we arrive. (if we’d make it that far!) There was light snow in the fields but nothing really accumulating. Yet.

I could feel happy anxiety as we approached Varney and then Durham. We ‘waved’ in the direction of Rob and Pat’s house over the bridge when we turned southeast at the main intersection of town. 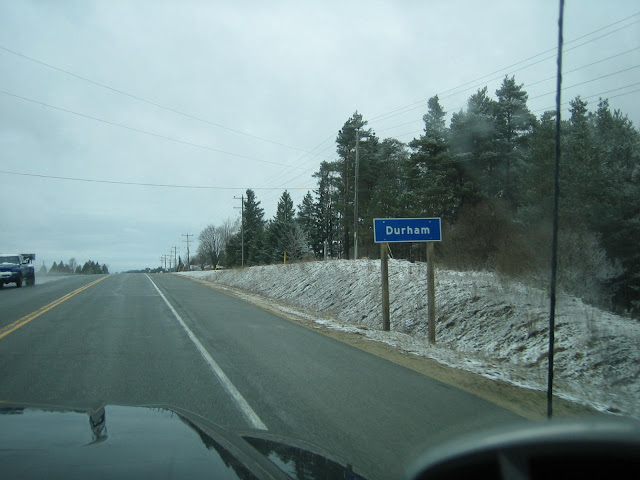 They waved back as they were on the bridge but we didn’t see them. 😊 Heading out #4 to Baptist Church Rd. the snow was now covering the fields and even B.C.R. It is fairly sheltered along most sections; you many remember my summer pictures of the woods on each side.

When we reached North Line, it was a real ‘oh no’ and Bill slowed our Suite down and crawled. No track bare here but we chugged along and made the turn into our snow filled laneway.

It was difficult to see where the road ended and the ditch grass began so our turn was a bit too sharp, too soon. I hopped out and held the fire sign away from the sides of our home as he edged forward. From there, after opening the gate, it was smooth sailing.

We were soon settled in our spot and despite the cold wind, Bill had us plugged into power. By 11, we were H-O-M-E. We finished inside set up, Bill hooked up our October RV show purchase of the Infrared heater to arm the rv up. We carried the 6+ pieces of Bill’s new plane down to the Hangar. There were no problems in the buildings over the winter but somehow the mice found something in the outhouse to chew on. Even though no t.p. was left out, there were traces of fluff all over. Not a big deal.

We had some bacon and eggs, cleaned up the dishes and drove to Hanover to visit with Donna and Gerry. They had graciously held our mail all winter for us as they did for my sister, Gayle. It was nice that they were doing the same thing so we got to say Hola to her and John as well. Unfortunately, I didn’t get a picture of my sibs but that will happen soon, I’m sure. We gave D & G a neat hand made peanut/candy dispenser that we picked up at Lake Havasu’s flea market and it was a hit.

After an hour and a half, we headed home and relaxed for the remainder of the day.  I was able to get a late blog post published from the previous day while Bill set the satellite dish up. That didn’t take long and our tv was up and running.

It was 6 when I warmed up the leftover gravy, beef, peas and my stir fry from Sunday night for supper. Bill made a hot roast beef sandwich for himself. Kind of a mish mash meal but it was very good and cleaned up the leftovers. Later, we had some rhubarb crumble for dessert.


We watched Bull and The Voice but I found it very boring. The young artists sing songs I’ve never heard of and I would never listen to that kind of music anyway. It put me to sleep (which I’m sure wasn’t hard to do). Finally, at 9:30 I went to bed and within a few minutes I was out. This was a great day and now I’m pinching myself that we are done moving for a while. We are home, we are home.

I hope you’ve had a great day as well. Warm weather is coming, we just have to be patient for it to stick around.

Thank you for following our journey!

Posted by Patsy Irene (Chillin' with Patsy) at 6:43 AM