London, Woodstock, Tavistock, Stratford, Ontario
On Sunday, Apr. 14th there was no time to dilly dally. I was up between 7 and 7:30, it is kind of a blur. We had our tea listening to the light rain hit the slide-outs and roof. There would be no walk for me today and it was very cold at 35F/2C. After finishing another late post from the previous day, we had poached eggs and got washed up and ready for a busy day.

At 10:15 or so, all 3 of us loaded into the truck. We had house warming and Arizona/Mexico gifts for Bridgette and Chris, baby shower gifts for Easton, Arizona/Mexico gifts for Yvonne’s family, Krystal and Marilynne and then a blanket, food and water for Clemson. First stop, Woodstock to see my daughter and her partner’s ‘new to them’ house. We were so looking forward to this after ‘stalking’ it on Google Earth through the winter. 😊

It didn’t disappoint. It is a century old home so there is work but the real aged hard wood floors, the ceilings with swirls and stars, the hideaway cupboards in each room, the upgrades from the previous owners, the large windows and old-fashioned stair railings, wallpaper border and the old wood stove in the cozy living room area. If you are in love with modern, you won’t like it but I grew up in houses like this and love it!

We had a great visit after the tour of the many, many, many rooms and heard of their plans for their home. You need slippers and a sweater right now, so we had taken both while they figure out their oil/wood furnace (an upgrade to-be). I gave them their h.w. gift of home crocheted slippers and they were met with delight. Chris has just been discussing getting some slippers with no hard sole so they wouldn’t be mistaken for shoes and end up on his feet at work. Cute story.

Time flew by as we drank coffee and shared cinnamon rolls and before we knew it we had to scoot to make it to Yvonne’s in Tavistock for 1:30. Bridgette followed a couple of minutes later as she was invited to the baby shower as well.

Bill dropped me at the door and I was welcomed by Bill’s daughters. Yvonne has a beautiful home, total opposite of Bridgette’s but just as lovely. This is the modern version and they have just recently renovated their basement ‘young boys’ room to an inviting adult space.

More guests arrived with a total of 12 guests and Jess began opening gifts soon after. She received a lot of beautiful things for Easton and I started the cuddle time. First Grandma Pat(sy) held the little guy and then let others have a turn. 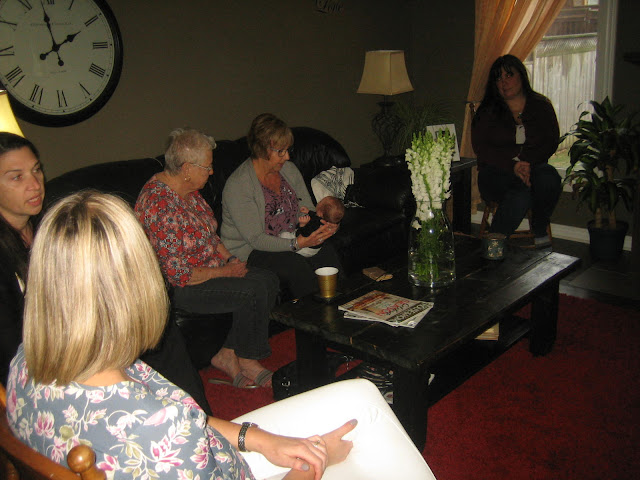 He went around the room like a sweet little virus that we all wanted a part of. The ‘snacks’ as Krystal and Yvonne called them were more like a spread and we all enjoyed nibbling and sharing in the delicious treats. Around 3:30 guests began leaving.


Bill had returned after visiting new friends, Jo-Anne and Bob, who lived down the street. They have just purchased a new Redwood fifth wheel and had many questions for Bill in this new to them adventure. The rest of the time he spent downstairs with Dennis, Matt and his 4 grandsons. We passed out more Arizona/Mexico gifts and hopefully the smiles and ‘thank yous’ were genuine as the boys and daughters tried on their hats and bracelets.

We visited until 5:30 and said goodbyes to the girls before driving to Bentley’s in Stratford. There, we met with Bill’s 2 sisters, Carol and Liz, Brian and Bruce and Marilynne. I saw them at the shower but Bill didn’t.  Clemson was very good but he wasn’t the happiest throughout this day. Circumstances meant that we couldn’t leave him home for such an extended time. At Bob and Jo-Anne’s he sat on Bill’s lap so their little dog could relax. It isn’t fair to the ‘master’ of the house otherwise.

At Yvonne’s, they have a large young dog so Clemson, with his anti-social behavior, couldn’t be let down to wander. While at the restaurant, he was confined to Black Beauty. He had his sweater on and a blanket so he was content and warm. We had a great dinner and visit together before we said more goodbyes at 7:30. 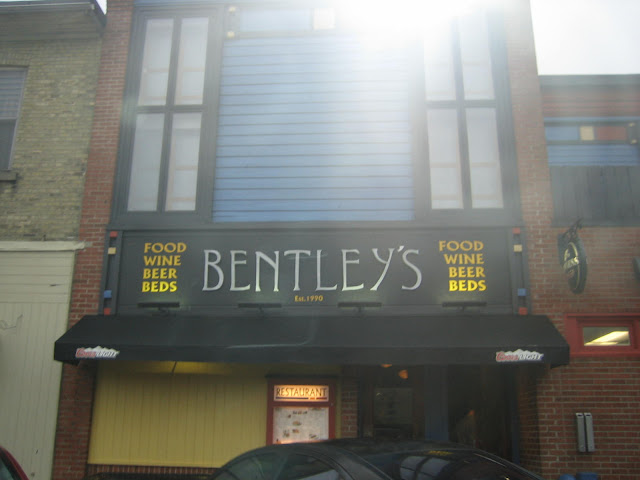 The drive home from Stratford to London is only an hour so we were home by 8:30. We turned our heater up a notch and sat with our books and my blanket for an hour.
This was a wonderful day and a great way to end our week in London and surrounding area. We managed to see all of our children, grandchildren, a couple of siblings and even a parent! Time to move on in the morning! The weather was cold and wet but really a NON-ISSUE for us.

Thank you for visiting us in London.

Posted by Patsy Irene (Chillin' with Patsy) at 3:53 PM