Another Bonus Day, I Took it Easy and Enjoyed It

The Ridge
On Monday, Apr. 27th we were both up before 7:30. I know I slept better than the previous night but it’s funny how each time I rolled over, I was aware of my ‘weak-knee’ and moved carefully. Oh bother, Christopher Robin! Maybe it got tweaked at some point as I could feel discomfort deep inside the joint. It was another lovely morning, full sun and above freezing temperatures. Not a cloud to be seen.

First on the agenda was to take the garbage bag down as well as our paper recyclables. We could burn them but tend to only do that when it is personal stuff and we haven’t had the nicest days to have a fire going anyway. I offered to take them down but didn’t realize how heavy paper and cardboard can be! I dropped the garbage bag part way down and made two trips.

It was gorgeous out and I wished that I’d taken my phone and had my runners on. I would have carried on for my walk at that time. I came back and had a tea with Bill and did our online blog reading. After we finished, I went for my walk and Bill drove over to the Acreage (Black Beauty knows the way blindfolded by now) to get a bladder full of water. His job was to tackle our dump valve for the black tank. It hasn’t been ‘pullable’ for quite a while. He can tell that story but first he had to flush the tank.

When I returned from the walk, we made a coffee, Bill had some toast and I took my book outside. As I opened the Bunky doors, I realized that I promised our winged friends that I would fill their feeders this morning. I filled the two and went on the hunt for my finch feeder since I had some of their seed left from last fall. While Bill worked, and with the birds happy, I did what I do best and sat in the sun. I’m at the point that I don’t want to put my book down.

I helped Bill a little bit but mostly took pictures for him so he could tell the story in his own blog. When he finished out there, I made our bacon and eggs for lunch. Since he was the one working today, I offered to clean up the dishes and sent him back outside to work in the Hangar/cargo trailer. By then, it was surprising how much of a difference the clouds made on the day.

It was 1:30 and big cotton balls were moving in with a vengeance. The air and wind temp seemed to drop by huge degrees. I had to slip my vest back on to walk down and retrieve the blue recycle bin.

It wasn’t warm enough to just sit outside by then so I moved into the Bunky and worked on the puzzle for an hour, leaving just enough for one more day. I know we’ll be getting rain for the next 3 days at least so I’ll be inside again if that is the case. We do have plans to take a drive for some shopping tomorrow and that will be enough to keep us occupied.

Bill texted me while I was in the Bunky that the grader was doing our road so I slipped out to take a picture – or two. 😊  When I walked down to see if the mail lady left us anything, I noticed the pile of gravel in the middle of North Line. 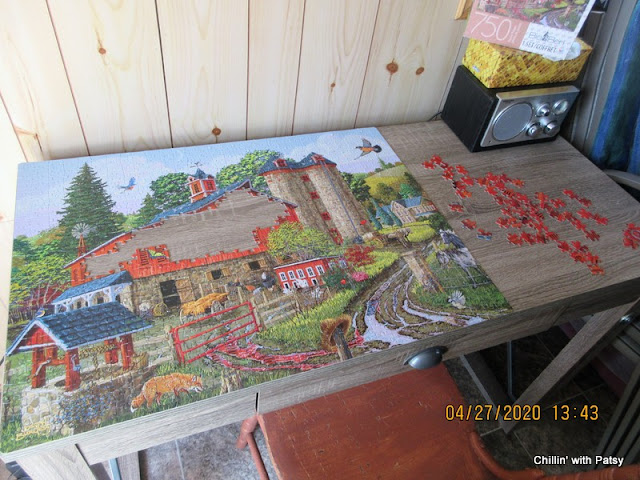 I knew he wasn’t finished and captured him again from inside the Suite. It was 2:00 by then and I decided to stay inside for a bit and start my post for today.

There were lots of turtles out sunning today and it looked like Mama had laid her eggs on that clump or was still trying. After about an hour, the clouds seemed to move off again and the sky was quite blue again. I love it when the sun dominates!

So, I moved back outside and sat facing the sun reading. It felt so good on my face that I closed my book and closed my eyes for a few minutes. Bill came up from the Hangar around 4 and after checking a couple of things, moved inside.

I came in soon after, although I could have stayed out longer, as I needed to make some hamburger patties for supper. We haven’t had a burger in a while and didn’t have any premade ones in the freezer. I hope these turn out okay. We waited until 5:30 to start grilling and I didn’t worry about anything on the side since we had dessert in the fridge to eat. Creamy Jell-o, pudding and whipped cream and cookies. I’m sure we’ll have enough to eat. 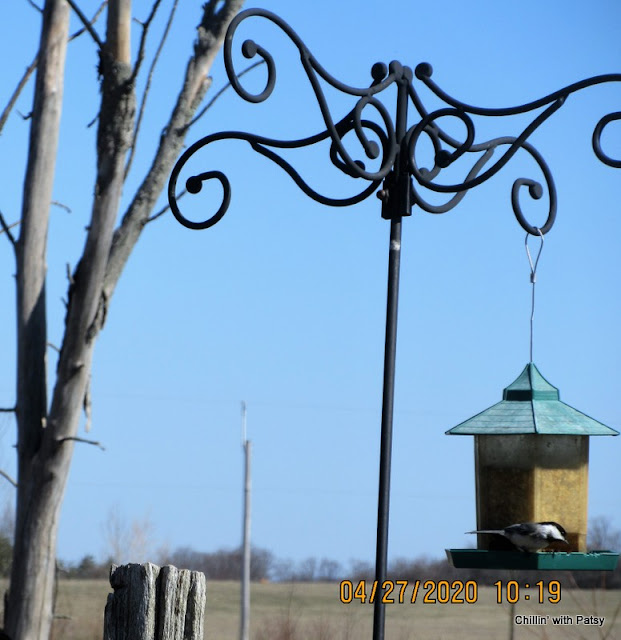 We were eating by 6:15 and dishes cleaned up by 6:45. As I was sitting in my recliner catching up on things, Bill called me to the back window. Mother AND Father Goose were out in the pond together. He was watching over her and presumably the nest as she bathed and made herself pretty. She must be preparing herself for the new babies. Oooh! I can’t wait! This is the couple from the east pond. The pictures aren’t great but now I think we have a clue where the nest is.

Supper was delicious, by the way. Homemade patties are as tasty as you make them but the unfortunate part is that mine always shrink up when cooked. I’m sure there is a trick but I won’t be making them often so it doesn’t matter too much. They were tasty! 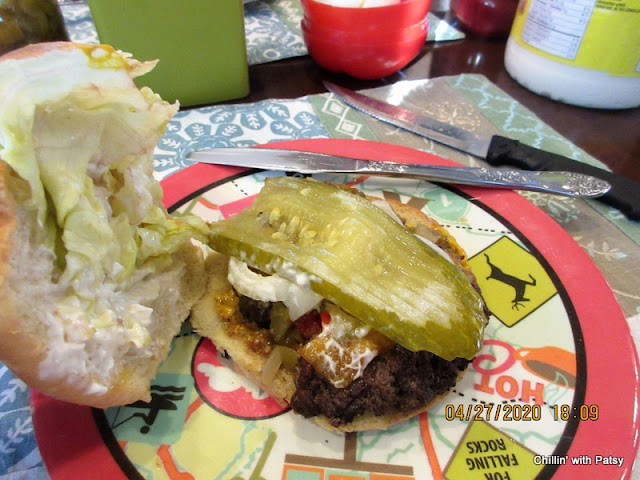 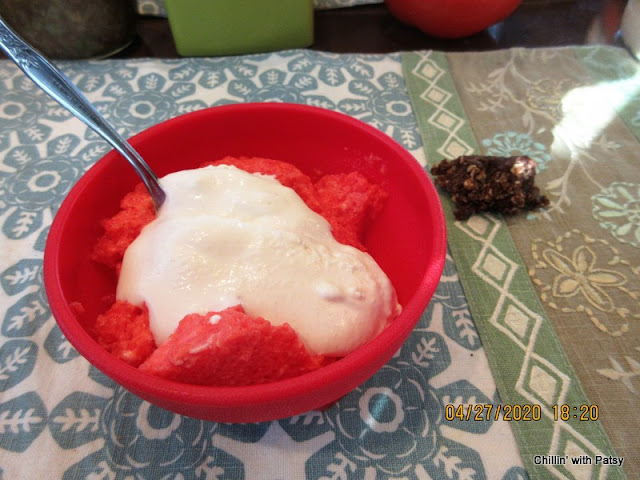 For dessert, we had creamy Jello with whipped cream and it was also a hit. It seems thicker this time again and not watery after sitting for the few days since I made it. Not sure what I’ve done differently but it works. 😊

We had some tv to watch but it didn’t start until 8. That meant I had more reading time while NCIS reruns were playing. It’s 7 pm and the sun isn’t quite ready to set yet so you may not get a picture tonight. This was another great day and yet I didn’t really do anything of importance.  We ended our evening by having a rum and coke together. I hope you had an enjoyable day too.