An Improvement in Weather

The Ridge - Home
Today, Thursday, Apr. 23rd, it was just after 7 when I joined Bill downstairs. He was up before me and was in the shower when I woke. It was a cool -1C/29F outside but we knew it was warming up to 8C/47F today. We’ll take it! It’s only 9 degrees but it will be a big improvement. The winds are not as strong either which does make a difference, especially up here. Okay, enough about the weather.

I didn’t go for a walk but instead we made our coffee and tea and caught up on things. We’d been tossing around who we were going to go with to get our Suite fixed. Either CarStar in Mount Forest or Heinz in Hanover, where Black Beauty is going. Since the cold weather has added insult to injury on the cap damage, we need to make a decision soon.

To move it along, after our drinks, we drove to Hanover to Heinz Auto Body and talked to Trevor. His shop is very nice but it just isn’t big enough to handle our unit. Not in length. My preference was to have the Suite completely inside a shop and Trevor can’t offer that. Bill was hoping to give him an opportunity as he is a nice guy. He does good work, we’ve seen that before with the truck, but after Bill looked inside the shop window, he confirmed that it just wasn’t going to work.

We next drove to Mount Forest and met Dave from CarStar. They’d already given us a quote on the cost to repair the cap and we’d heard high recommendations regarding their work. Bill looked in their shop and we came away quite convinced that we will be pleased with the finished job. Now, we just need to wait until Trevor gets the tailgate shipped in. We’re hoping that we don’t have to wait too much longer. Once the truck is done, could be 2 weeks, the Suite can go in.

It was a nice drive and we feel that we have accomplished something today. We drove back through Durham and stopped to fill my 5-gallon water jug on the way through. I also asked Bill to stop at the Mat. Somewhere, I lost a sock in our last washing so I wanted to check the lost and found. I didn’t have any luck but realized when I stopped that I actually missed working there. I don’t know why, as I certainly don’t miss the early hours. It was just nice to have that outlet. On the way back, we stopped at the Acreage so Bill could turn the tap off for the day. 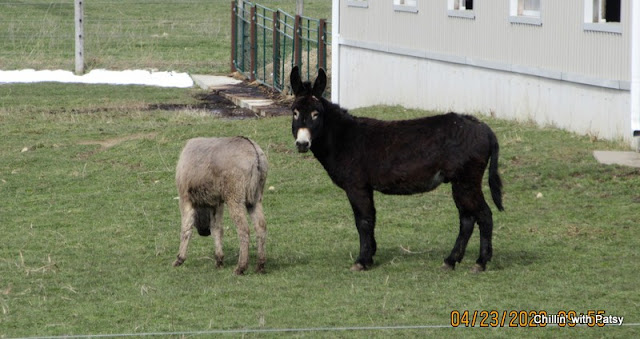 Back home, Bill advised Aviva of our choice for the trailer. I mixed up a batch of cherry Jell-o to set and then made a couple of packages of Instant sugar-free Jell-o pudding. I wanted us to have some choices for dessert this week. These are healthy choices and that makes me feel better too. When they were done, I fried bacon and eggs for lunch. That hit the spot and I was hungry for it.

I could tell that Bill was anxious to go down to the Hangar and that is a result of the weather making a change for the better. Inside, I started pulling Mom’s paperwork together for her Income Tax assessment. I needed to dig a bit to gather her medical receipts as they were all in emails and then I had to print them off. You never know if they’ll make a difference but since she had foot care and dental care added last year, it was worth a try.

Once the package was ready, I basically messed around online in Facebook and emails. Sometimes emails come through with videos, a lot, actually, and I don’t open them right away. Sometimes, I just delete them if they are too big but mostly, I try to see what they entail. I had 3 or 4 unopened that our friends, Jim or Pat, sent through and that usually means they are worth looking at. I trust their judgement for which ones I would enjoy.

I couldn’t believe that the day was slipping by so quickly so at 2 I took a walk down the lane and to the corner. It was quite pleasant when I stepped down to the patio but once I got around the corner of the Suite, the wind had me zipping my coat up to my neck. The walk was nice and I went beyond the corner before I noticed something in the ditch. I first thought it was glass but then realized that it was slate from a roof or something. Nice to paint on so I found a nice piece and carried it home.

There were a few flyers in the mailbox so I brought those up at the same time. Bill was just closing up the Hangar and came in for a hot chocolate. He said his feet were getting cold. Soon, he can work down there and be warm and I can get back out in the Bunky. I had a tea and started today’s post and my sweetie caught up on his sleep beside me. 😊 When he woke up, I was able to blend the cream cheese and heavy cream for the Jell-o. I also blended some whipping cream for the pudding.

For supper, we had pork chops with a coating fried in olive oil. One was quite a bit thinner than the other so didn’t want them to cook for the same time in Madame IP. One would end up either over or under done. As the chops cooked, I heated some corn on the stove. It was a good meal and I actually enjoyed the pork chops with the crispy coating. We did the dishes and then had some of the vanilla pudding and whipped cream for dessert. With a macaroon, it was yummy and filling.

We had a couple of programs on our PVR so starting with FBI:Most Wanted. The night had started to cool down and we’ll be hitting below freezing tonight again. Hopefully, just one more night. Donna and Gerry were at the Acreage and left the water running before they left.

This was a better day and we enjoyed it. Thank you for your visit.