Bitterness in the Weather, Inside Day

The Ridge
It was a bitter cold wind that greeted us on Tuesday, Apr. 21st when we woke around 7. Actually, it had started last night before bed but it didn’t get really cold until the wee hours of this morning. I got up, turned the furnace on and hopped in the shower before joining Bill downstairs for my tea. There was a dusting of snow on the ground and a few teeny flakes floating in the air. Brrrr. It was below freezing and wasn’t going to get any better than that today.

I’d put the puzzle away last night and won’t start the last one that Donna gave me this week. It’s time to move on to other things and by then maybe it will be warm enough to get outdoors more often. After our drinks, Bill drove over to the Acreage to put a trouble light on at the pipes in the shed that are in the most danger of freezing. He commented that it was surprising with the cold weather that puddles are not frozen and it is still quite muddy in areas. The water will be on a bit more than a trickle all day and night.

The day just got colder from then on. It was -2C/30F when we got up and by noon hour, the winds had reached 28 mph at times, more blustery snow and the temperature dropped to -6C/28F. I hadn’t planned on going outside today anyway, we knew there would be a couple of very cold days before there was a change, so I began pulling out my recipe files. I found one for Carrot Cake, which is a favourite of ours but I’ve never baked it. Today was the day.

If I had almond flour, it would be a keto version, but I don’t. Instead, I used 1 cup of regular unbleached flour and ½ cup of crushed almonds (meal). It was in the oven around 11:30 and I just had the cream cheese frosting to mix up when Bill asked about eating lunch. I’m never hungry when baking as I taste test probably more than I should so suggested he have his toast and peanut butter. He was fine with that and we skipped bacon and eggs.

By the time the cake was done, he was snoozing in his chair so I couldn’t blend the cheese ingredients. No worries. I sat and started my post with a coffee. We are running out of coffee pods, slowly, so instead of having one a regular, I had a decaf. I can’t tell much difference in taste but we only keep them for company. Sitting beside Bill, I then read some more chapters in my book. It is another good story that keeps me involved.

When he woke up, the frosting was finished, we licked the beaters and the cake was frosted. What next but to taste it while it was warm? Dee-lish-ous! Bill went upstairs for a couple of hours to watch tv, so I could read downstairs quietly. He didn’t have to, but he was feeling generous even though it was chilly up there with the door closed. At 3:30, it was tea time so he came down and we had a cuppa together.

Supper was just a matter of reheating the leftover pork roast, dressing, potatoes and carrots and within 20 minutes we were eating. As winter breezed (haha!) through outside, we were toasty inside. Every day we are grateful for our health and pray that this pandemic soon dissipates so the illnesses become a thing of the past. 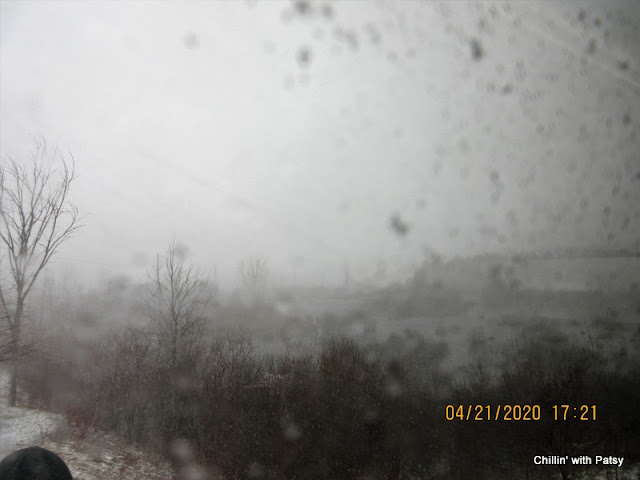 We had a few conversations today with our insurance company for the truck and trailer plus with the auto body shop owner who is doing the work. Things are moving along as well as can be expected. This was one of those ‘find something to do’ days so after I baked the cake, I did a lot of reading. There is nothing wrong with that but one does feel lazy. What will I get into tomorrow?

Thanks for stopping by! Comments are always welcome.