No April Fool’s Joke, The Sun was Real

The Ridge - Home
On Wednesday, Apr. 1st we woke around 7 but dozed off until closer to 7:30 before hauling our butts out of bed. I know the lazy mornings will change when it is warranted but for right now, aaah. I peeked out of the window blind near my head and smiled. Blue sky and sunshine! Good morning!

Downstairs, Bill sat with his coffee reading blogs. I sat in my chair with my tea and finished the last 4 chapters of The Sixth Man. It was good indeed and the last 15 or so chapters were full of intrigue and suspense. Just the way I like a book to be. When I finished, I hopped in the shower. With that done, I added water and Tide to the kitchen sink.

It was time to do a small bit of laundry. Private stuff only lasts so long. Bill teases about getting 4 days’ worth out of 1 pair. Inside, outside, back and front but that is an rv’er’s joke not real life. I removed the 2 dining chair covers, replacing them with our second set. I may as well wash those too. I may be needing long sleeve tops for the next week so tossed a couple of those in also. With the sunshine, they will dry but with the cool winds, it will take a lot of the day.


I went out for a walk after Bill had his shower and either before or after that, I sat and caught up on blog comments and posts. Thank you, Maebeme, Deb and Nancy for the tips on fixing my sweater. I haven’t touched it yet, as there have been other things going on. Bill had some toast and jam and I had a bowl of my oatmeal around 9:30 since we were both feeling a bit hungry. We’d have something more substantial later. 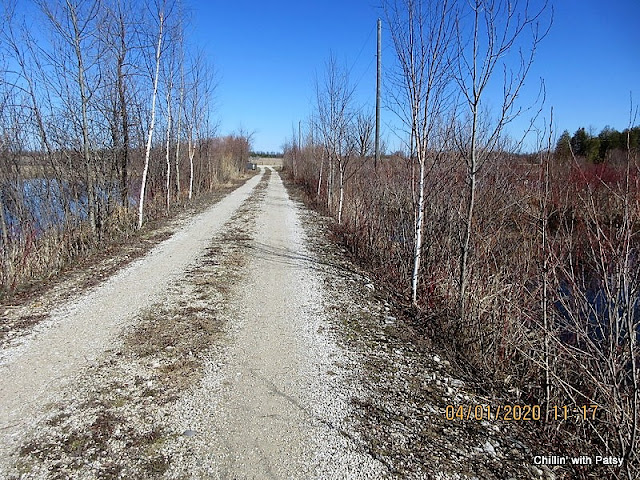 With the warm sun, I went out with my boots on and double layer jacket to do some more raking. It is hard to stay inside when that sun is so glorious. I almost didn’t recognize the yellow ball. I finished in the corral, up on the hill where I placed the summer and fall plants last year. Under the leaves, they were thriving and now I am very hopeful and will nurture them as much as possible. Bill is not allowed on the hill as he doesn’t know plants from weeds. He admits that openly.

I raked around my flower garden, what a surprise to see some rhubarb popping up, and then over behind the outhouse. The wind had picked up and it was beginning to be a losing battle over the leaves. I left the hefty piles I’d made and put the rake away for the day. I was tired and didn’t want to overdo it. I’d noticed around 1:30 that the mail lady went by just as I returned indoors but she had stopped at our box. First, I made myself a veggie wrap with some cottage cheese and then walked down to check it out.

Bill almost at the same time, came inside to make his own sandwich, peanut butter and cheese. The cheese is getting skimpy so it is a good thing there are only a couple of days left of this rationing. 😊 We’ve planned very well and have not been deprived of anything over this past two-week isolation period. The mail wasn’t too exciting, a Home Hardware flyer, but the walk was refreshing and topped me up over my 8,000 steps.

Back inside, I went upstairs and lifted the bed to sort out the ‘things’ we’ve brought back. I don’t know when we’ll be able to hand them out to the kids but one day we will. There was a virtual Family Meeting with Grey County Long-Term Care last night. The Director and a Dr. of Public Health were conducting it and families of residents were invited to join and watch. I couldn’t gain access with Zoom (like FaceTime or Skype) so waited until today to view the recorded hour-long message.

It was interesting and there were a few things that I was not aware of as far as ‘how’ things are being handled in our long-term care facilities, like Rockwood. It gave me a good feeling to know that normal things, especially for residents like Mom with dementia, are being handled as regular and normally as possible. She wouldn’t be able to understand any of what is going on so that normalcy is priority. Mom has a birthday in April and although I won’t be able to see her, I now know what I can do to get my card to her on the special day.

I made myself a tea and sat to start my blog post. When Bill came in around 3:30, he was pretty much done working out and about for the day too. I sat in my chair and attempted to start my next book. The Innocent by David Baldacci. Bill read it fairly quickly earlier in March so I knew it would be another show stopper. With the tv on, I couldn’t focus so just stretched back after the first chapter and watched the reruns too.

Bridgette called me from her home, in between work conference calls and we had a nice catchup chat. At 5:30, I sautéed the sausage until browned on both sides and then cooked them for 10 minutes. On top, I placed the inner pot with mini carrots. After a 10-minute release, supper was ready. Oh, and I cooked some mixed vegetables for Bill, he’s not big on carrots. I added some sauerkraut to my sausage and that just topped it off perfectly!

We did dishes and then just for the fun of it, watched Big Brother Canada’s last episode. We used to watch this reality program years ago until it got a little sickening and we stopped. Today we saw previews for the last episode this season and they were all informed that because of the Covid virus, the show was shutting down, 24 days in. No winner, no more television, just sending them home. It was interesting and scary at the same time, seeing just how much this virus is controlling.

This was a wonderful day. The spring weather was presented to us on a platter and we made the best of it. We know there is more to come. It didn’t get too warm today, mostly because of the strong winds, only reaching 8C/46F but that sun was something to celebrate. 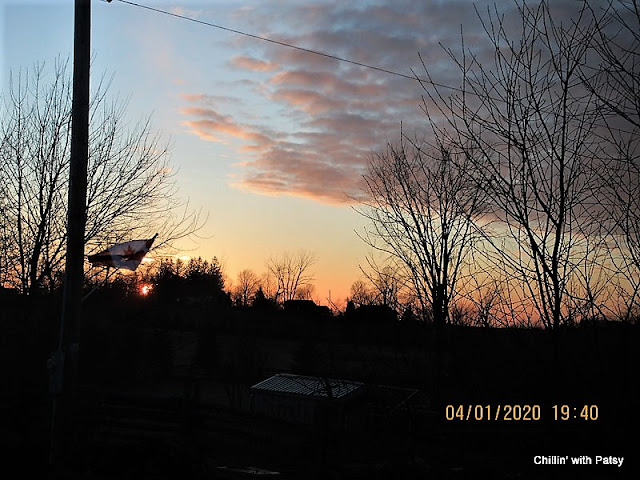 Thank you for stopping to see what we got up to. Comment if you wish or you can also just check a box under Reactions.