The Ridge
On Monday, Apr. 20th, Bill and I woke and rose around 7:30. I’d had another one of those weird nights and it was because the night was either full of reality-type dreams or I was actually awake a lot thinking of those things. Downstairs, after I ascertained that at -4C/26F I wouldn’t be walking, we made our Keurig drinks. We love our Keurig about as much or more than we love our Instant Pot. Our favourite appliances.


I connected to my Fitbit app to determine how much sleep did I actually get and it was better than I first thought. An hour and a half of wakefulness but most of the 7-hour sleep was light. Funny that we don’t really get much ‘deep’ sleep at all, none of us.


My curiosity was satisfied anyway, even though it was not my normal 8 hours. After tea, I stripped the bed sheets and sorted the 2 loads of dirty clothes. It was just before 9 when we headed into Durham to the laundromat.

Both of us were pleasantly surprised that no one was there. It was evident that Jamie and his son had been in last night as the place was nice and clean. I sprayed and wiped down 3 washers anyway before we loaded them and we sat inside to wait. With no one else using the Mat (which in itself for Jamie must be disconcerting), we read our books uninterrupted for the half hour it took. With the sun in full control of the morning, I was happy to bring them back to hang outside.

I woke with a headache this morning, part and parcel maybe from that weird night, so I took a couple of XS Tylenol to dispense with that and went out to hang the laundry. Bill puttered around down in his Hangar and cargo trailer while I did that and because my garage sale radio from last summer was acting up, he took it apart and cleaned the dials for me. That did the trick, now I had music for when I was able to get back in the Bunky to that puzzle.

It was nice to sit in an Adirondack chair in the sun for 20 minutes while we chatted about the upcoming day. We’d invited our buddies out for HH later so hoped that it would be warm enough for an outside one. If not, we know how to be responsible indoors. The wind will be the deciding factor. At noon, I made our bacon and eggs and then Bill returned to the great outdoors. I worked on the puzzle and finally around 2, gave that up for a doze in my chair.


That did the trick for the headache as it was gone when I woke 20 minutes later. Yay! I took a walk down to the mailbox to see if she left us anything today. For some reason a card I’d placed in it Thursday afternoon did not get picked up so I hope she took it today. It may be a late delivery now. ☹ After I got back up the hill, I checked the clothes on the line. They were dry so I brought them in and we put them away and then made the bed. It will be nice crawling into fresh sheets again.

Just after 3:30, our buddies arrived in the pretty red truck. Nice to see it again, it reminds me of spring and summer. The wind was too cold and gusty to sit outside so we moved inside and Bill made a hot chocolate for the 3 of them and I had a creamy tea. This social distance is getting to be a habit, we won’t know how to be close after this is all ove!. They stayed as far away as possible inside and we were all very careful. If it wasn’t for the wind, sitting on the patio would have been nice.

After they headed home, I started cooking a stuffed pork loin roast in Madame IP. I didn’t sauté this time but just placed the thawed roast on the rack. I added onion, carrots and potatoes and set it for 45 minutes. I hope that is enough, I’m never quite sure. I finished my puzzle during cooking. At release time, I let it go for 15 minutes while I prepared our place settings and cooked Bill’s corn. Bill made the gravy tonight. We were eating by 7 and it was delicious.


When dishes were done, we watched The Voice, recorded 911 and enjoyed the evening together. Hope you are all well and warm. 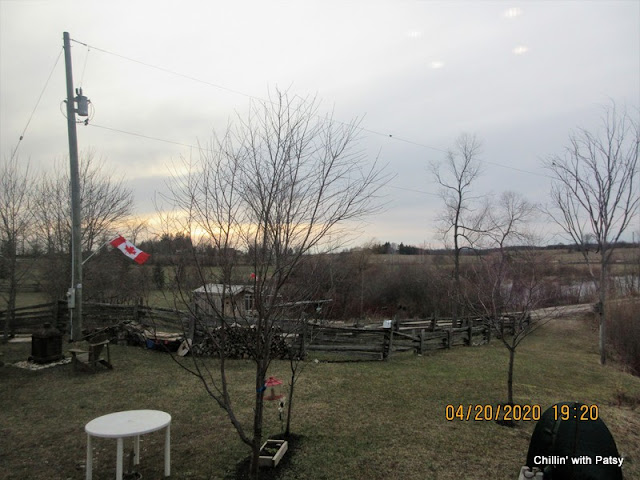