Finishing the Garden, Detailing and Why'd Yertle Cross the Road?

Friday, Apr. 9th we had a mixed sky when we got up. Bill saw on his phone that the rain would stop in 30 minutes. Well, it hadn’t even started, it didn’t appear at first that we got any overnight either. Funny. He left for work at 7:15 and there were a few spatters just at that moment on our windows. Not enough to wet your ears. He later told me there was evidence on the tonneau cover. I made my tea and watched the sky.

Clouds hid the sunrise and then it broke through. Back and forth. The winds were really strong though from the southwest so whenever the sun appeared, it was soon gone. The forecast was for a high of 20C/72F and we were already sitting at 17C/63F at 7 am. I puttered around inside finishing yesterday’s post and had a bit to eat before 10. Unusual for me, but I had to be at M’s for 11 o’clock this morning for a few hours.

I went outside and finished raking and removing dead iris leaves from the garden and then drove around the corner to the shop. Today would be a fairly easy job because I was detailing his GMC Acadia. M is a smoker and is going through online dating sites, meeting new friends. He’d like to quit smoking and wants the car smoke-free as it will also encourage him to abandon the habit. I try to be supportive but I don’t nag and he isn’t my responsibility. I'm getting paid to do it so I don't mind the job.😊

It took me 3 hours to vacuum and wash and wipe the insides down as well as washing the rubber mats for the floors. Sounds like a long time but this SUV has leather seating for 6 AND 4 seas fold down flat with carpet backing, so lots of nooks and crannies. At 2, I had a surprise visitor while I was inside his home preparing the Little Green Machine for shampooing the upholstery. It was Bill, he was done work and saw Ptooties sitting in the lane. I would be another hour and he went home for a snooze and some of his own puttering. 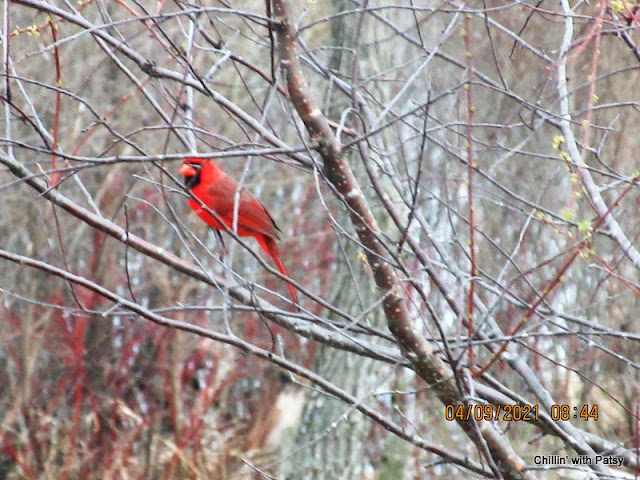 At 3, when I got home, we drove to the BizyBee auction location near Elmwood and picked up our winnings from Wednesday night. Bill got a few new tools and I got a basket of goodies. Garden gloves were my goal, a vintage poncho, unique salad tongs and an InstaHanger that might come in handy in the Bunky. We were pleased with our purchases and didn’t spend much $. I chatted with the owner about the procedure for taking some of our stuff and we were home by 4:30.

I was kapooped, after 5 hours of physical labour. I’m just not used to that! Bill said to relax, he was in no hurry for supper. So, I made a cup of tea, wrote some of my blog for today and relaxed for an hour. 😊 Fish and chips were on the menu tonight, a meal we both prepare together. At 6, we started. Bill was on fries duty and I was on fish duty. At least I didn’t have to catch it! The basa filets were delicious and the ships done perfectly.

After dishes, I finished writing my blog and downloaded pictures for today. It won’t be surprising that you are reading this on Saturday morning, nothing will be posted tonight. I can tell you that this was a great, busy day and each small step I take towards yardwork is one huge step to having a more relaxing spring, with a lot of my work done.

The weather will be changing over the next week and even though more normal temperatures and a lot of rain, we look forward to the results of that. (she says to herself). We watched a movie called Summer School, a silly one from 1985 but it starred Mark Harmon. If you need help with that, he is also known as Leroy Jethro Gibbs in NCIS. 😊 It gave us a laugh for the evening.

Posted by Patsy Irene (Chillin' with Patsy) at 6:01 AM