Bill and I started our Monday, Apr. 26th as per usual. I was downstairs before 7 to say goodbye as he headed off to work. I had my tea and after washing up, drove into Durham myself. The Mat wasn’t too bad but the floor was messy with regular dirt plus those stupid little (prepare for vent) detergent beads. You know that German woman in the commercial who dances around pathetically? Well, if you haven’t seen it, lucky you. I dislike the commercial and I dislike the beads more.

Anyway, those laundry beads are the worst thing to clean up and when users let them spill on the floor and leave them to get stepped on………..grrr *+#$%! I lose it. They don’t sweep up easily nor do the wet mopping get them all. My arms get tired going back and forth trying to get the ones that are ground in. Often, there are also loose ones in the machine as well indicating that they don’t all disintegrate in the wash. Or perhaps too many are used. That’s it, I’m over it now. 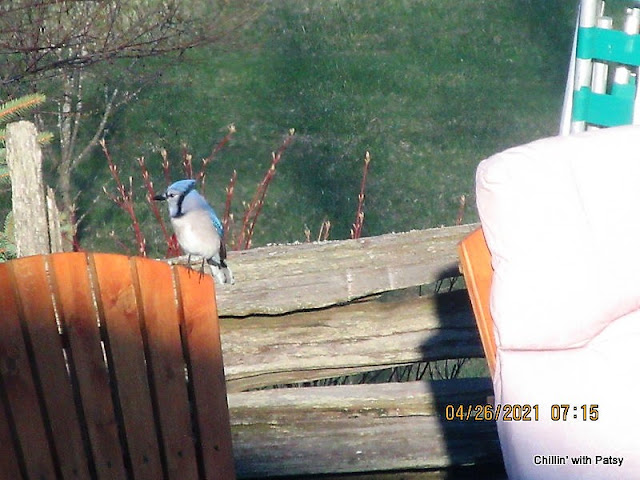 So, with only Jamie’s cousin in to do her wash and another lady to dry her loads, it was quiet. I’m beginning to get sedentary again, comfortable in my work space and just pray that it lasts. 😊 When I left there, it was just after 9:30 and I drove down to Foodland. I haven’t been in here for ourselves yet this year and only planned on getting the 4 items on the list rather than drive to Hanover. I did find 3 more things that were on sale before I left.

Last stop was the Beer Store for a case of Molson Cdn for our drop-in visitors. It is Gerry’s drink of choice so we like to have some in the Bunky fridge for the summer. I meant to take the RO water jug but forgot it so headed home. I did remember to get lotto tickets at the grocery store though, saving an extra stop downtown. I was excited for today because it was to be a warmer day, giving us hope for our spring to return – again.

It was sure cold out there this morning, -3C/26F. No wind though and that is a bonus at any time. The sun was out first thing but by the time I returned from town at 10:30 the clouds were taking control of the sky. That sure wasn’t going to help increase our temperature! Driving up the lane, I was tickled to see so many geese in our west pond. It shouldn’t be too much longer before we see babies and that always gives us added entertainment.

Inside, I followed up on a couple of things online and then went out to plant my Dianthus plant. It was on the table at Foodland and looks like something that wanted to come home to our garden. 😊 I thought I might stay out after that was done and spread more mulch but that air was not warming things up. With no sunshine, I wimped out and came back inside. I got the vacuum out instead and did the floors, upstairs and down. 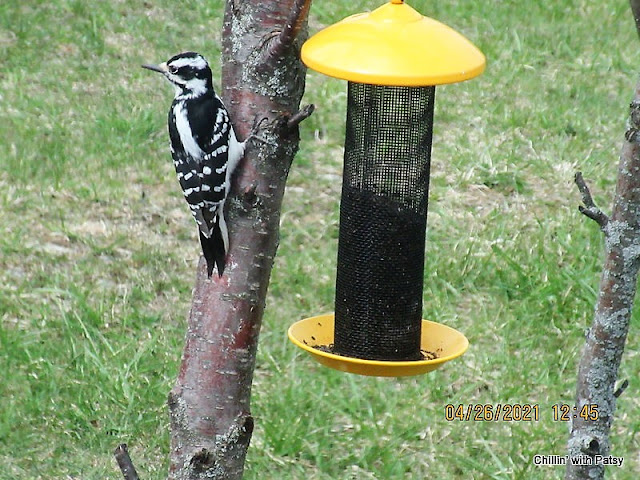 We were unplugged so I was happy to see the sun re-claim the sky again by 1 o’clock. My sister, Wendy, had sent us a link to the VanVugt Greenhouses in Owen Sound so I went online and ordered 4 plants for pick up. They will be ready for me next Wednesday so that will be a day trip for me. Not sure if Value Village will accept donations but that would be ideal if I could get rid of the results of my purging from a couple of weeks ago.

Around 2:30, I sat outside when the sun came out and read my book. It was nice for about 30 minutes until the clouds returned.

I came inside and made a cup of tea. It was sure warmer indoors. Bill got home from work around 4 and had his wood and a filled bottle of propane. Maybe now that will slow down a bit, once we aren’t using as much for heat. We had burgers for supper, Bill had his on the last bun and I had vegetables with mine.

It didn’t seem like enough so we each had a couple of scoops of ice cream to finish it off. I’m going to have to make some desserts, good desserts for these meals that don’t fill us up.

Supper was good though and after dishes, Bill had a friend who came to pick up our scrap metal. There isn’t enough to make a trip to the scrap yard worthwhile for us and he can add it to his collection. We will be watching 9-1-1 and 9-1-1 Lone Star later, provided they are new episodes.

We didn't get to the forecasted 10C/44F or if we did, it was for the brief sunny period. It was cooling off by the time Bill got home and it will be dropping to 4C/40F overnight. A warmer day tomorrow will be nice even if it rains. Before signing off, I need to wish my s-i-l, Carol, a happy 65th!

Bill called her tonight to pass the message along. Our birthday celebrations aren't the same, obvious by her statement that she went for groceries when asked what she did. 😏 A celebration will be in order after the pandemic is over.

After a good day, we had a nice quiet evening. Thank you for stopping in!

Posted by Patsy Irene (Chillin' with Patsy) at 5:55 PM