What a night (er, morning) it was on Friday, Dec. 15th. I slept well when I slept but woke when Bill crawled in at 12 midnight. I’d been sleeping for an hour. Then at 3:40 our little piddle bum decided he needed to go out. We both woke to the sound of his familiar body shake and jump off the bed. Bill took him out, wondering why some nights and not others?

I couldn’t drop back off to sleep after that. Bill had no problem as I heard the muffled sound of his heavy breathing. I finally must have dropped off a few times and I woke again at 7:30. I wonder if it was my tea that did that? I thought it was early enough that it wouldn’t. 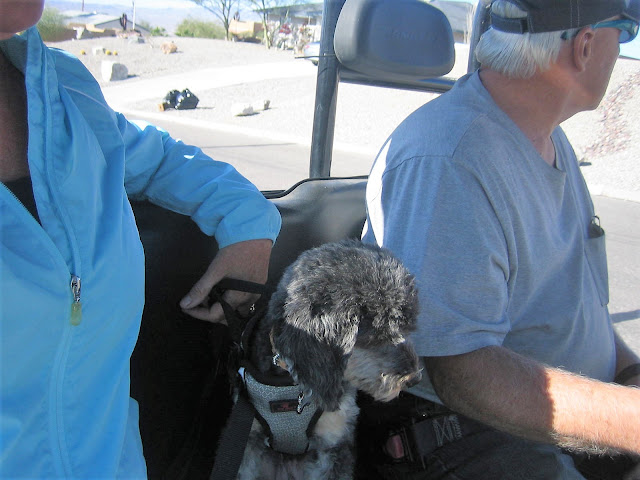 I should have immediately got dressed to go for a walk but I didn’t even though I was surprised to see it was a calm, mild 53F. Instead, I made my tea and set Bill’s coffee ready to brew for when he rose a few minutes later. I remembered it was garbage day in the neighbourhood so added ours to the bag George had started and walked it and the recycle bins to the street.


Bill noticed that the neighbor across the road has pulled out with his 5th wheel. Good! Now maybe I’ll get a nice shot of the lake when the sun is going down. While I read blog posts from yesterday, Bill went out and dumped our gray tank since we have that capability here. Like we’ve said, this is a great spot and we fully appreciate the hookups.


Bill needed to run into Walmart for something so I decided to tag along and pick up some of my yogourt. We got what we needed and then I checked out their slip-on slippers. Mine from Avon are a few years old and beginning to rip and look ratty. I found some nice ones for $4.98 and they are perfect! See for yourself! My old ones went in the garbage immediately. 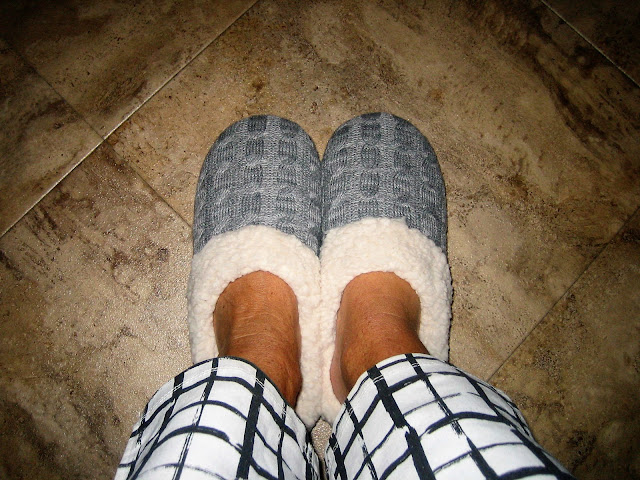 On the way home, we drove the back way, down London Bridge Road past our park to the post office there. We had a very important piece of mail to send off. While driving that route, we noticed a couple of guys in a pick up truck putting up signs that said “Drive-In Lighted Nativity” tonight 5:30 to 9:30. Hmmm, sounds interesting.

I had a banana and some cottage cheese when we got home and then we took Clemson for a ride on the 4-wheeler. I know Bill still has an itch to get out on some trails but today, he favoured me and we stuck to all back streets looking at the beautiful homes. One in particular caught our eye, which made us go ‘omg’. I took pictures of it and then on the way back Bill stopped so I could peruse a garage sale.

Nothing there for me, mostly Christmas stuff, which we certainly don’t need. I was so impressed with Clemson’s behaviour on the ATV. Bill had his seatbelt on him and he loved it! We wondered if it would be too loud or too breezy or too cool but he settled right down with his head o my lap a few times. I had to get a picture of the two of them coming up the driveway so hopped out. That was a fun 30-minute jaunt about.

When we got back, the boys were tired out so I caught up on here and went out to work on my puzzle. We are heading out again but not until after 3. It’s a gorgeous day at 63F, full sun and no wind at all. This is indeed why we are here. At 2:30 I had finished my puzzle and was quite warm. No wonder, the temperature had risen to 68F while I was out there.
I came inside to sweep floors in the Suite and sat down to read for a bit. We cleaned up and once more left Clemson in charge while we drove down to the ferry at 3:30. I remembered my free passes for the rides, our 10% off coupons and our players cards. Yay! The ride over was nice and we sat on the upper level in the sun. We headed directly into the casino and sat side by side at a penny/nickel slot machine.

I seem to have difficulty getting a machine to accept my card but with Bill’s help, we were both ready to play. We allow $20 each and then call it quits whenever we play, no matter what. Bill did some up and down, some wins and losses. It was apparently my lucky day, for the first time, ever!
I hovered around between $18 - $21 for quite a while and then raised the stakes by playing 45 credits each time. Meaning 45 cents with each play. That’s when I started winning nicer amounts and once I got over the $50 mark I said I’d stop at $50. When I was hovering around $68 I said I’d play to $60 and quit. That’s what I did I was so excited just to win something and enough to pay for dinner. 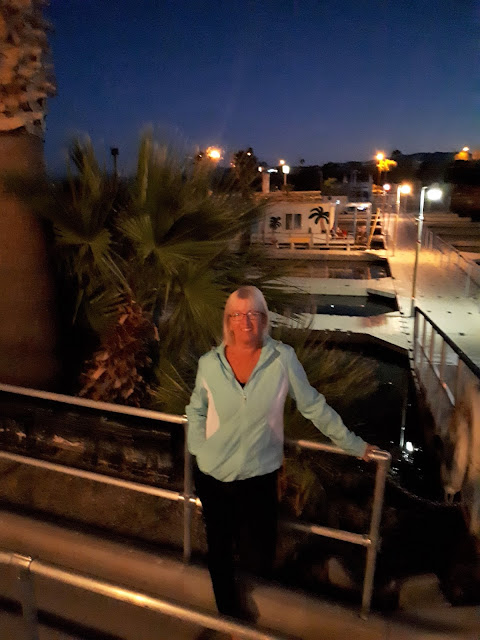 My Chicken Cordon Bleu was different than what it is at home but it was still very good. I started with Clam Chowder as my appetizer but still managed to eat it all.

We had coupons for 10% off our meals so our waitress, Alina, gave us each an individual bill which was a bonus. Our ferry arrived at 6:15 and when we got back, we drove down London Bridge Road to take part in the Drive-Through Nativity Scene. 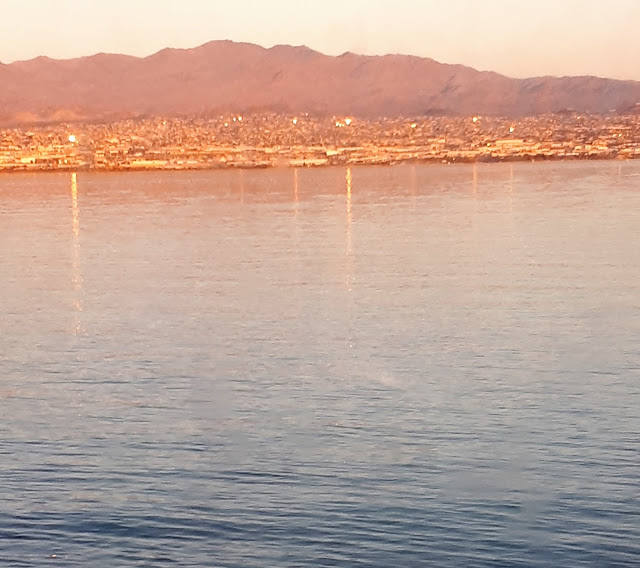 There was quite a line up, quite the big deal with Volunteer Police, Deputies and many volunteers guiding the long line of traffic. This was a really well-done display put on by the New Hope Calvary Church with live participants in each setting. 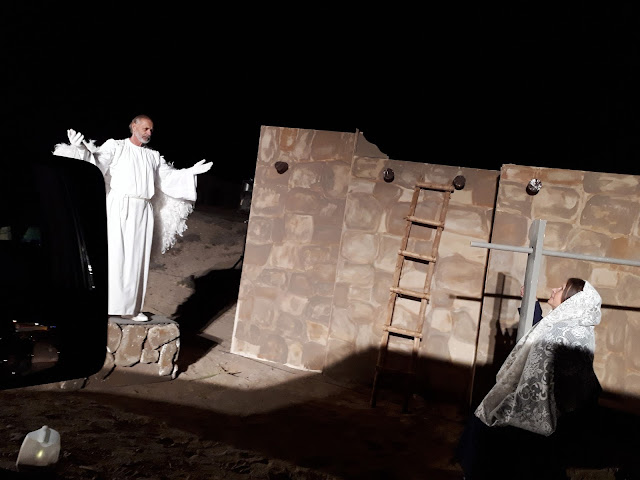 Even the donkey, lambs and camel were real!
My camera was sitting at home so I had to use my camera phone and that just doesn’t do the performance justice. I'm not blaming the phone at all, it takes great pictures, I'm taking the blame for not slowing down enough to focus. Take my word for it, it was awesome!


We arrived home around 8 and settled in for the night. It has been a wonderful day, something else we can say ‘been there, done that’. I hope you’ve enjoyed yours as well.

Thank you for stopping in. I apologize for the morning posting, just couldn’t get it together tonight.
Posted by Patsy Irene (Chillin' with Patsy) at 10:00 AM