It was 4 am Saturday, Dec. 30th when I was first woken and that was from Bill telling me that I was having a bad dream. I snapped out of it quickly and tried to grab hold of what the dream was about before losing it. Strange, not sure where it came from but at least I remember it. Weird. After mumbling a thank you, I was a long time dropping off again.
I heard Bill get up a bit later for a nature call and then I finally stretched and crawled out at 7:30. Clemson needed out too.
I offered the little bum a walk but he had fallen into a hole on the couch in his bed and wasn’t budging. Hmpf! Well, fine then, I went by myself just around the perimeter today. I’d promised Bill last night to wake Bill at 8.

Today, we had plans to drive into the Arizona Marketplace in Yuma with George and Suzie. We love  the Arizona market. 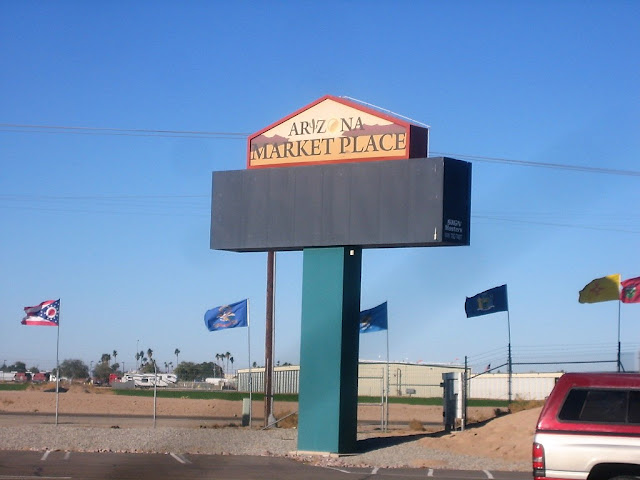 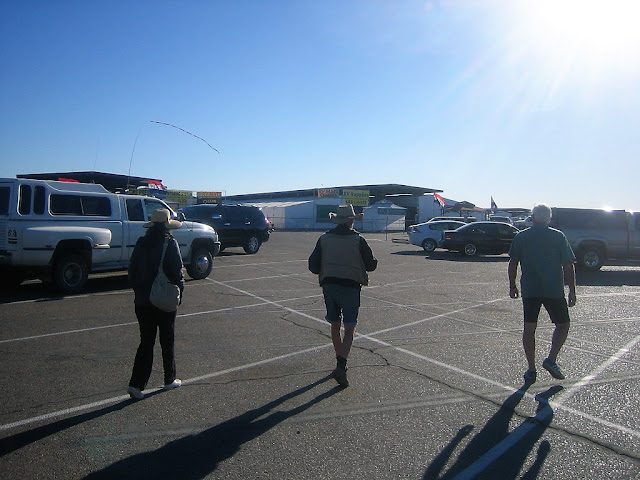 So, after Bill showering and me doing a wash and grabbing a bite to eat, we left the park around 9:30. It was our turn to drive so Black Beauty got a leg stretch as well today. Traffic was light this morning and we were entering the grounds by 9:55.


Because we always have so much to see and so many different directions we like to go in, we agreed to split up and meet at the entrance at 11:30. Even Bill and I have different ideas of what we want to look at so we parted too.

I found things as I perused in and out of different vendors under the tent cover. For the Suite Bill and I chose 4 step covers. Ours needed replacing badly.
I picked up an Arizona decorated bag for holding and dispensing plastic grocery bags. I’ll secure a Command hook under the sink where it can hang.

So much neater than my usual ‘cram and jam’ just to have some bags on hand. I found some bath poufs, fingerless mini gloves for my morning walks and a shoulder purse.

Oh, and then as I was about to leave I got my hands on another nice sun hat. Happy camper, this gal is!

We were home by 12 noon with the expectation of meeting a couple of blog followers (Blurkers – and I mean that in a totally GOOD way) after lunch. Bill was feeling not too bad this morning and the outing was probably doing him good. I opened a can of mushroom soup and we shared that for lunch after which Bill and Clemson went up for a snooze.
At 1:30 I took Clemson for a short walk, the one he bummed out of this morning, and after returning him, I went to the puzzle room. Bill was still snoozing. It was when I was up there chatting with my sister, Donna, back home when I got an email from my other sister, Gayle. Gayle and John left Chatsworth, Ontario yesterday early afternoon to head south. This was their year to host Christmas so they remained home until after the big meal with their family.

I hadn’t heard from them and was a bit concerned. The email informed us that they have been dealing with some snow and had to stop at Lansing, Mi for the night in a motel. Please keep them in your prayers as they too make the late trek to a warmer winter destination. Thank you! I think tonight will be a St. Louis motel and then hopefully an open window for them to make a move.
I returned at 3 when Suzie said our company had arrived at their site. Bill and I grabbed our drinks and chairs and joined them. Peggy and Frank Edgar have been following all of our blogs for quite a while. She feels she knows us quite well and guess what? She does! It is such a perk for us to hear from people who read our posts and even more thrilled if they make contact and wish to meet. What a treat! 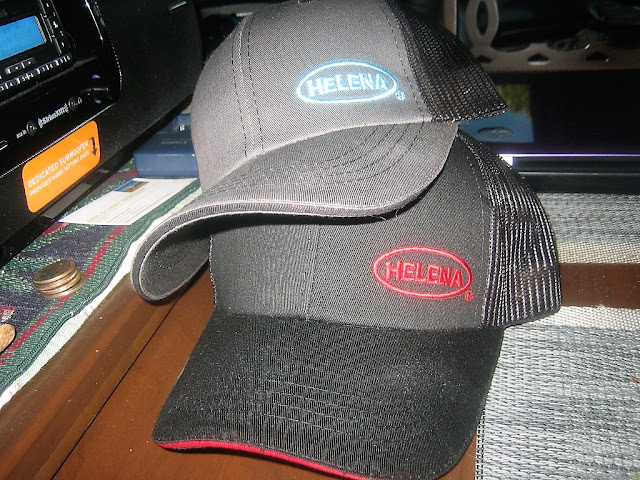 As seems to happen often, conversation just flowed amongst the 6 of us and then Clemson joined us for a bit and grabbed some of the attention. They certainly didn’t have to, but Peggy and Frank brought us ball caps and some goodies from the Dateland Date Farm. You two are spoiling us! Thank you so much!

Shortly after 4, Bill, who had grown quiet, needed to go back to the Suite to lay down and Clemson went with him.
My poor sweetie, from the sound of his voice, I could tell his head must have felt like it was about to burst. I said my goodbyes around 4:30 as did our company. Bill was still sound asleep so I’m hoping when he wakes up that he will feel better again. We were planning on fish and chips for supper but nothing is written in stone.

The sun is dropping in the west sky and there is no wind to rustle the leaves on the ficus. My hummers have indicated that I need to fill their feeder so must do that before they desert me forever. Tomorrow.
I heard Bill moving upstairs so went up to check on him at 5:30. He was thirsty and almost drank a full bottle of water and indicated that he wasn’t hungry for anything substantial. Unfortunately, he finished the buns off last night so I can’t even make him toast.
I, on the other hand, was hungry so made up a bowl of chicken salad with lettuce, onions, broccoli, tomatoes and olives. It was very good and it was something I knew Bill wouldn’t like anyway. I sat with a glass of White Zinfandel and added to my blog post for the day. Bill came down at 6:30 looking and still feeling pretty rough.

As I cleaned up the dishes, I noticed that I was feeling a tickle in my throat and was occasionally coughing. Oh no!

I finished my post and made myself a mullien tea. My sister swears by this so I’m going to give it a shot. I've never had much success making it strong enough but I’m going to try and head this cold off at the pass. Stay tuned and I’ll let you know if it worked! Bill made himself comfy in his chair in front of the tv and I’ve noticed that his coughing has subsided. 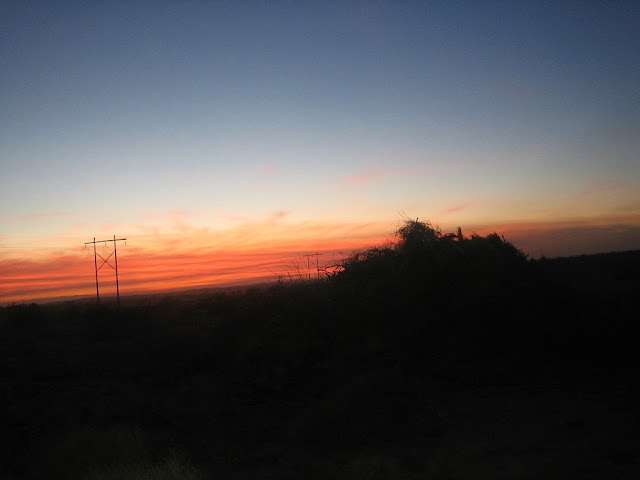 This has been another good day in the park. With some shopping at the market, new step covers and a few other things, we are very glad we went. I’m sure we’ll go back another time this year and spend more ‘poking’ around time. It makes for a fun outing. I hope you enjoyed your day as well.

Thank you for reading and Peggy, thank you for reaching out to meet us! Feel free to comment, I enjoy reading what you have to say.
Posted by Patsy Irene (Chillin' with Patsy) at 8:54 PM