Today, Wednesday, Dec. 27th we were up with Clemson at 10 to 7. We got dressed thinking we’d stay up but after making the bed Bill decided to lay down again on top of the covers. Well, what the heck, I was still feeling kind of 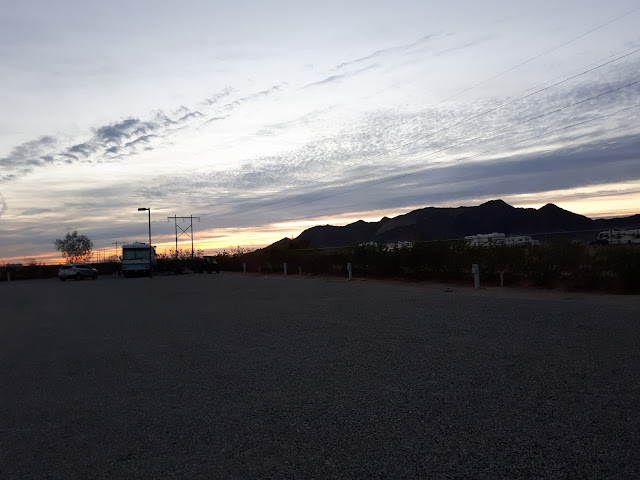 tired too so curled up behind him. Next thing I knew, it was 20 after 7. We’d both dozed off again. I crept out and got dressed for a walk.

Checking the temperature outside, I was delighted to see it was 51F/10C. That was 5 degrees warmer than the past two mornings so I didn’t have to bundle up as much. I did the full gambit this morning, just over a mile and a quarter and when I returned home, Bill was just rising. He couldn’t believe he had dropped off so easily and didn’t hear me get up.
He had his coffee and I had my tea while reading posts. I’d read a few blogs last night before I went to bed at 11 so this morning was just a catch up with those I’d missed. Time was creeping by, as it often does when we’re on our laptops, and Bill reminded me that we’d planned to do the laundry today. Oops! Yup, got it. I went upstairs and began sorting the clothes into two loads.

We drove to the laundromat and were happy to see that the washers were all empty. The park housekeeper, Sandy, was just finishing up washing the floors but after a few minutes we picked the two we needed. Just in time too because before we left, the other two were taken as well. Bill drove back to the Suite to await my text that I was ready for him to help fold.
I waited for the wash to finish by working on the jigsaw puzzle. I must admit that unless I am working on it with someone I know, I’d rather work on it alone. Maybe that is a bit anti-social but we all have our quirks, don’t we? When the loads were dry, I folded them without bothering Bill but he must have been keeping an eye on the time. He showed up to finish the last bit of folding.

Back at the Suite we had scrambled eggs. I was just preparing them when George showed up at the door with a pot of his homemade turkey soup. Before heading up for the laundry, I had taken a bit of pearl barley over to George with some Christmas cake. He has offered to make a separate pot of soup for me using barley, my favourite soup thing, instead of the noodles he likes. George loves to cook and share his creations.

I tasted the soup and it needed another 10 minutes or so to cook the barley. George admitted to not knowing much about how long it takes since he doesn’t cook with it. When it had cooled, I poured it into a container and then we had our eggs. We cleaned up dishes and at 12:30 I had changed and was on my way up to the pool. I wasn’t missing this gorgeous day! It was already 75F at noon hour.

Kate, one of the rv’ers, was at the pool but I was surprised yet again that hardly anyone uses the pool. I guess there aren’t many swimmers in the park. Anyway, I did a few laps over the course of the 2 hours I was there. In and out of the pool and the hot tub. Both were wonderful. I walked back in plenty of time before our Happy Hour. We were hosting today.


Bill had hoped to get his drone out and up today while I was swimming but unfortunately, his battery was not charged enough. It was on charge when I returned and soon enough George and Suzie joined us.
We also had unexpected company, more rv’ers whom we had not met. Dee and Bill arrived today with their truck and Lance truck camper.
Bill was having some work done on his teeth at Los Algodones so they came here for a week. They have a home in Nebraska but have come south for the winter as well. If I heard correctly their 5th wheel is parked not too far from Salome, Az. (Sorry guys if that is incorrect). Anyway, as we’ve said many times, we were happy that they joined us, because it is always nice to meet new blog/rv friends. Everyone got along very well because we all have so much in common.

At 5 we all went our separate ways, almost time to start supper. We took a stroll around the park perimeter. When Bill lit the Weber at 6 I was blown away by how it was still light out. It sure doesn’t seem that long ago that we were rushing to get supper started by 5 before it got dark. We all know what that means! Like I tried to say yesterday, the days are getting longer.
Bill grilled our sausage and I made up a salad and warmed up the dressing leftover from last night. Our supper was simple, delicious and filling. After dishes I realized that I hadn’t started writing today’s post. 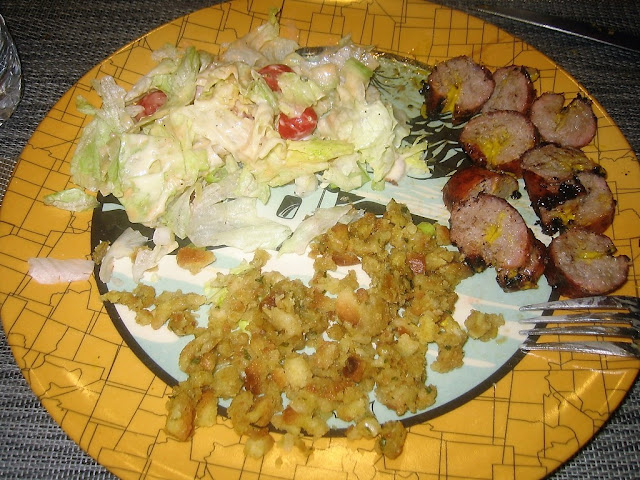 Oh my, that doesn’t happen too often! I caught up quickly, it was a really nice day to report about. I downloaded my pictures, which probably aren’t too exciting today, but what I saw is what you get! 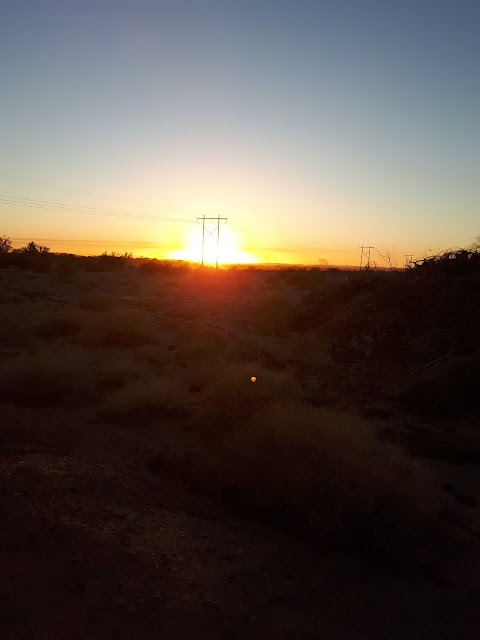 We sat for the rest of the evening with old movies playing in the background. First we watched the tail end of Sleeping in Seattle and then Pretty Woman came on. This is fun, we haven’t seen either of these for a while and they are both at the top of our lists to watch over and over. Who doesn’t love the serenade between Richard Gere and Julia Roberts? Well, some I'm sure, but we do.
I hope you’ve had a great day. We each finished ours off with a dish of apple crisp and/or my cake. Just enough.


Thank you for stopping in today. All comments are appreciated!
Posted by Patsy Irene (Chillin' with Patsy) at 9:50 PM