Well, last night Bill was in bed by 9:30. He was concerned that he’d be awake in 2 hours but managed to sleep until 3:30 so there is his normal 6 hours. Clemson was out of sorts too as he got up at 4 for a piddle before crawling back under the covers.

I first woke on Monday, Mar. 12th at 6 but didn’t get up until 6:30 to find Bill sitting in his recliner. Reading was making his eyes heavy again.

I suggested he go back to bed, which he did and he slept until 9. Good! He should be well rested for the day. We don’t have anything planned for today other than setting up our satellite dish. We missed Madame Secretary’s first episode of this season but it couldn’t be helped. It wasn’t life or death that we watch it.

We’d noticed that the couple parked beside us had a brand new Class C Leprechaun. Bill noticed the guy getting ready to pack up so went out to chat with him. When I saw that his wife joined him, I slipped on my hoody and gloves and joined them. They are from the Nethlerlands! What a nice young couple. They are heading to Moab and the Grand Canyon before driving the ‘rental’ unit to Las Vegas where they’ll catch a flight home.
Patrick and Pavlina came inside briefly to give Clemson a cuddle. She has a poodle back home because of the plane trip and was missing him. They were soon on their way.
After our tea and coffee and blog reading I made up omelette quesadilla/sandwich. We cleaned up from that yummy brunch and decided it wasn’t warm enough to go for a walk, yet.

Well, you talk about lazy days!! Bill went out early afternoon and set up our Shaw dish and with a little finagling, we got the best reception since we left home. I sat on the sofa with Clemson for most of the day, in the rays from the sun and read my book. I felt chilly even though the fireplace has been on all day. Once I changed into warmer socks, things were much better.

After feeding Clemson at 3 he needed to go out. It was kind of my turn, I hadn’t really moved all day. So, he did his thing, we went for a very short walk and then I went a little farther on my own. I’m like a puppy myself, I suppose. I catch a ‘sight’ rather than a ‘scent’ and keep following it no matter where it takes me. That was proven in Elephant Butte when I was chasing the jack rabbit.
Today, I was chasing prairie dogs. Oh, my goodness! There were 5 or 6 of them running in the field over the fence and they are so cute! I was walking ‘out of bounds’ and it took a young security guard to slow me down. He very politely told me that guests were not allowed to walk ‘down there’. Oh, okay. It was him who told me what those critters are and we had a nice little chat about them before I apologized and headed back to the Suite.

Next time, I’ll take my zoom lens. Don’t worry, I won’t go as far so I can remain in the ‘in bounds’ area. The sun is really quite warm and late afternoon it made it to 51F but the wind is still quite chilly. At 5 we walked across the parking lot to the Lucky Star restaurant for supper. We were both hungry and this place has not failed us yet in the two times we’ve eaten there.

Bill had the Fried Shrimp dinner and I had the Hot Roast Beef with baked potato. So much food! No restraint was used when it came to loading up the beef and I wasn’t surprised when I had to ask for a ‘doggy box’ and half of it came home with us. 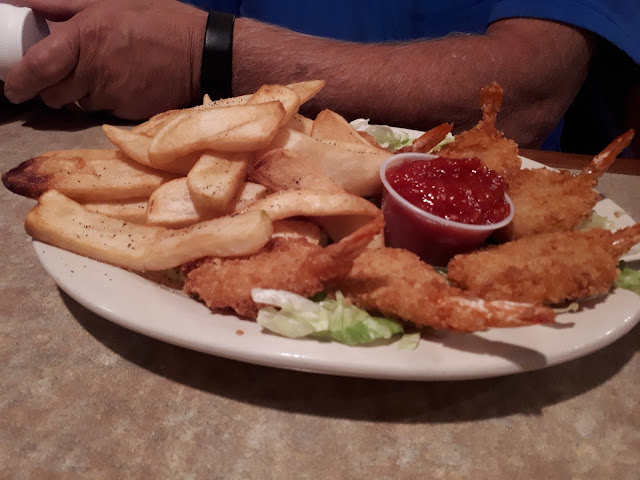 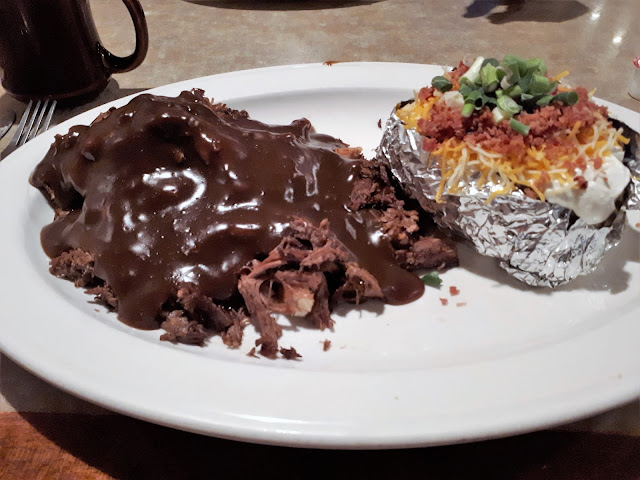 Inside, we called our brother-in-law, Gerry and Donna to chat about their plans for the Acreage. Things weren’t working out for their cottage so they’ve gone a different route. We like their new plan too!

We sat in our chairs together and watched NCIS reruns while Murdoch Mysteries was recording. At 7 CT we watched The Voice and recorded the first American Idol for this season. We’ll have an evening’s worth of entertainment when nothing else is on. This was a great peaceful relaxing day. I hope you’ve had a good one.

My title indicates that we are Lucky. It isn't from taking our chances and winning at the Casino though. It is from driving here yesterday after a long day with the hope on our lips that there would be a 'free' spot for us to park for 3 days with full hookups. There was. We are lucky.

Thanks for stopping by. Feel free to leave a comment.

Posted by Patsy Irene (Chillin' with Patsy) at 6:44 PM