I went up to bed last night at 8 pm and turned the tv on. I knew my eyes were too heavy to try and focus on my book. I found Wheel of Fortune and managed to keep my eyes open long enough to solve a few puzzles before turning the television off and rolling over. I know I dropped off pretty quick and didn’t hear Bill and Clemson come up later.

This morning, Thursday, Nov. 8th, we were both awake at 4 and tossed and turned until just after 5 before giving in and getting up. These time changes are doing us all in. Rob and Pat are experiencing the same sleep habits. After our tea and coffee, Bill and I sorted laundry and drove down to the laundromat near the Office.

We only had enough quarters to do 3 loads of wash and to operate 1 dryer but Rob and Pat popped in for a few minutes and loaned us .75 for the second dryer. The Office opened at 9 so I bought a roll of quarters for the next time and to pay our debt. We finished the laundry and drove back to the Suite. Bill had eaten cereal before we left so while he put his clothes away, I had some oatmeal and strawberries. 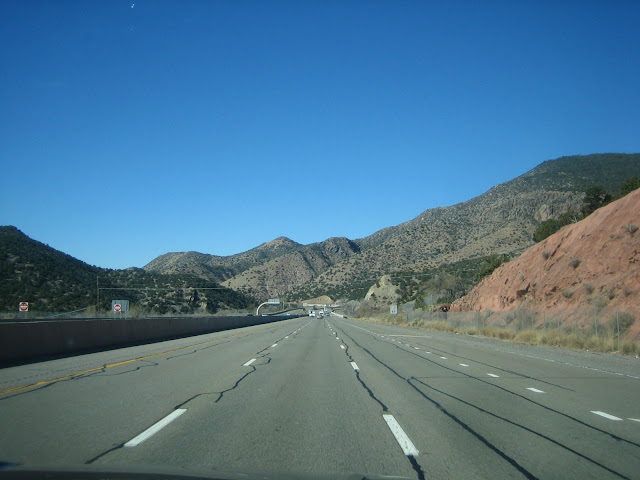 We had touched base with Rob and Pat about their day and we all had different plans in mind for the early part of the day. That is what is great about a friendship, we know that we don’t have to do everything together in order to remain friends. Bill wanted to take his laptop somewhere to get looked at so we headed into Albuquerque following directions to Staples, first. We were greeted immediately and directed to Kevin, who looked at the laptop right away. No delay. 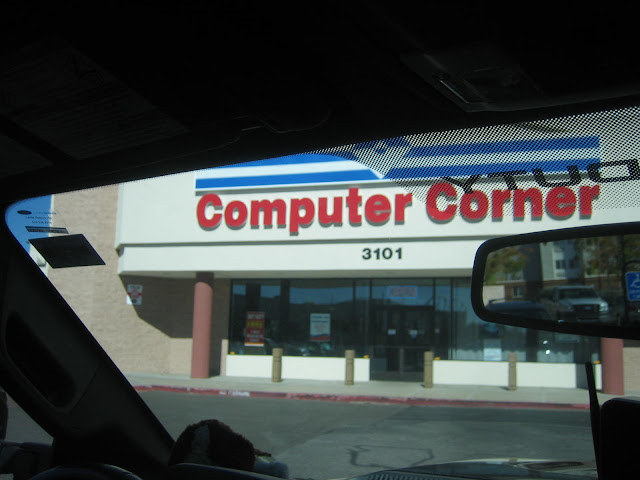 He informed us that they did not have the equipment necessary to do what needed to be done and directed us to Computer Corner on Richmond St. N. We walked in there, after an easy commute, to find Joshua standing behind the counter as if he was waiting for us. It looked like a very nice open concept store and Kevin at Staples was correct, they weren’t too busy at all. Joshua was such a pleasant young man and conversed with us about Canada and our travels.

He saw the problem and suggested a ‘portable’ Wifi adapter in the form of a usb dongle (doggle?) . We purchased one for $20 and it worked like a charm! Yay! Bill is back on line now too. This is much better than having to look for a new laptop right now. Back home, he had a pile of what I teased to be ‘homework’ so I left him to it. He had over 400 pictures to download, our online travel map to update and banking to get caught up on. Best that I get out of his way so he has no distractions.

I took Clemson out for a short walk and after returning him home, went for my own walk up through the hiking trails. It isn’t good walking, really, lots of rocky turf even though their trails are clearly marked. I forged on and captured photos of prickly pear cactus as well as a staghorn cholla cactus, up close and personal. The walk took me all the way from our site down to the Office and I popped into the laundromat to pay Rob back his .75. They were also taking care of their clothes.

It wasn’t a bad day out there with clear blue skies but the wind kept the temperatures around 14C/57F. In the sun it felt a tad warmer. When I got back 45 minutes later, Bill was still working on his laptop so I began downloading yesterday’s pictures into Picasa to make collages. Once that was finished, I tried to connect to wifi and whatever Bill did yesterday to fix it, failed me again. I was so frustrated that I just walked away. Grrr! I began prepping chicken for supper when Rob popped in at 4 to invite us over to their place for Happy Hour. We made a tea and joined them inside where it was warm. Clemson came too. I’m sure he is baffled about Pat and Rob’s house, as he wanders around and around for a while before settling on the couch beside us. He is so messed up with the new time too that he begins looking for supper at 2:30 now. It’s just silly to get upset about it so we feed him and relax.

At 5:30 we headed back and I baked the chicken thighs covered with butter and chicken seasoning. They baked for 45 minutes and we had Caesar salad on the side. They turned out good and with the last helping of Rhubarb Crisp and Cool Whip, we had our fill tonight. The trick was to eat our dessert early so it would have time to settle before I fell asleep tonight. I hope I can make it until 9 at least!

Just before supper, I managed to get my laptop back on line again but if it happens again, we’ll need to find out why it is happening so often. We might have to visit Joshua again. There must be more wrong than meets the eye. I finished yesterday’s post and I apologize for so many all in a row. We do what we have to do and I just wanted to get caught up.

This has been a good day, with some things off the list. We might try and find some ‘touristy’ thing tomorrow, something that doesn’t cost an arm and a leg. Check in and see if we found something!

Thank you for checking in today. Your comments are always appreciated.