It was 7 when I got up again today, Wednesday, Nov. 28th and out the door soon after. The winds were non-existent again and it was 57F. Nice morning for a walk. I took my stick this time and walked along the wash to the east once more and headed to the streets of the city. The crew were already working on the ‘House on the Hill’ but from what I could see, it was only a crew of two. Unfortunately, I've lost the pictures I took this morning on my walk.

I found a couple of nice rocks that need to be painted, just about perfect ones, as I went up over the bridge and down and back the other side. What a view I had up there from a higher level and what a view the people in that new home will have when their home is finished! The way the sun hit it first, before any other home, was inspiring. I’m sure there will be lots of windows on that corner. 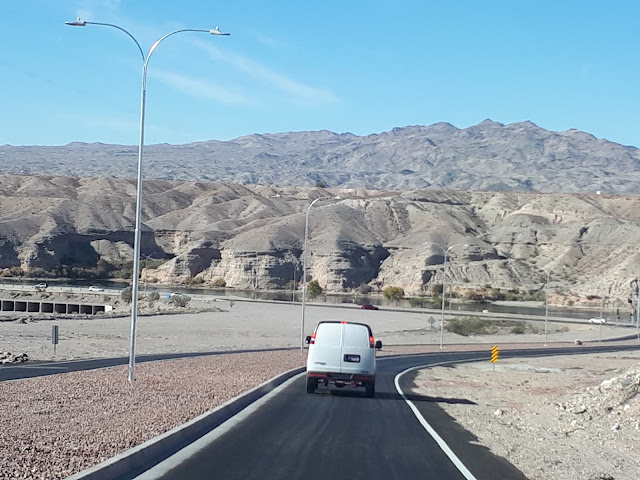 On the way back, I met Rob heading just where I’d come from in the park and I arrived home a few minutes before 8. I made my tea and Bill was up soon after, as was Clemson, and joined me with his coffee. We read blogs and checked our banking status. Yay! Pensions are in, time to get some groceries in the fridge and freezer.

I had a shower before we left and we informed Rob we were on our way in to Bullhead. They had already declined joining us today as they had laundry on their morning agenda. Bill drove first to Smith’s and we checked things off our grocery list as we walked around the unfamiliar aisles. From there, we went across the highway to CVS and picked up some good deals on the vitamins we needed.

One last stop at Sam’s Club had everything crossed off the list and Bill pulled in to get fuel at their pumps. Can’t beat $2.88/gal for diesel! It didn’t take too much to fill Black Beauty and we were on our way back home again. It didn’t surprise us one bit to see Clemson at the neighbours on his long rope. He got quite excited when he saw us, which is always a good thing!

It takes a while to get our food put away but there is a place for everything and when everything was in its place, I proceeded separating the sausage, chicken breasts, pork chops and ribs into meal size packets. Bill helped and I found room in the freezer. I feel so much better now with lots of choices. That means I can be less creative considering what we’ll eat for suppers.

We had leftovers from last night and agreed that would be tonight’s meal, even without the rolls and salad. Neither felt it was necessary. At just before 2, I walked up to the pool for a bit of a swim and some sunbathing. There were 2 other couples there and one left soon after I arrived. The pool was wonderful and I swam around for a bit before heating up in the hot tub. A final swim across the pool to get the soap off and I sat with my book in a lounge chair. 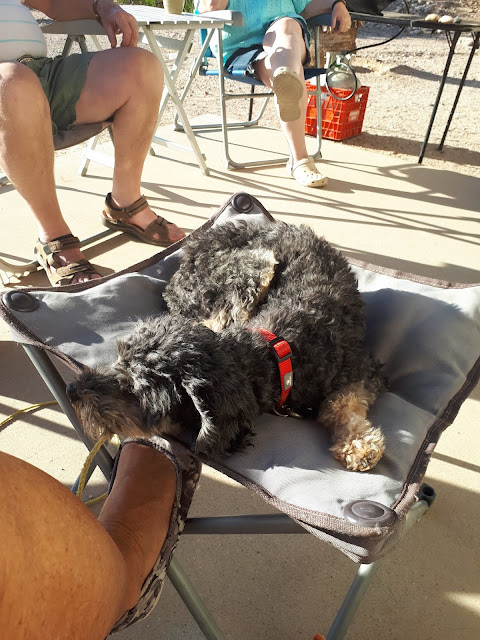 It was just before 3 when I walked back to the Suite. I took the garbage down to the dumpster and invited myself (and Bill) to our neighbours for happy hour. Their neighbor to the west pulled out this morning so they had a gorgeous view and would have full sun on their patio at just the right time. Clemson joined us today as well and seemed quite content to wander a bit and sit on his ottoman a bit. It was a nice hour and a half as usual before we said goodnight.

The sun should give us a performance when it sets since there are just the right amount of clouds hovering over the horizon. Rob informed me that there was a $2 fee for standing on his site to take a picture so I tried to get creative as I crept over and snapped the first picture. He caught me and there was a request through his open window to drop the fee in a cup the next time. We do have fun.

The 2nd time I walked over and snapped a photo, I carried with me a jar of salsa. We don’t eat much of it at all and had an extra jar. It was a win win for both of us. The sky didn’t do what I expected, unless I missed it when we were eating supper, but there will be other sunsets that wow me.

We cleaned up dishes and after taking Clemson out for his business we began watching our recorded programs.

This has been a relatively quiet day and yet we’ve taken care of a few things. I hope you have enjoyed your day as much as I have mine.

Thank you for stopping in to see what we’re up to!

Posted by Patsy Irene (Chillin' with Patsy) at 8:36 PM