I got up at 6:45 on Thursday, Nov. 29th and it wasn’t raining so after putting our vitamins in the daily pill dispenser, I went for my walk. It was 55F and the winds were at 1 mph. I knew the forecast was for the sky to fall (so to speak) so I was grateful that I could get out and about the park before that happened. With the exception of one up by the office, I covered every street in the park.

As usual, I stopped in the clubhouse to check on the puzzle and was pleased to see someone else is stepping up to the plate and helping out. I put a few more pieces in and headed back to see if my sweeties were up.

They were, and Bill was at the table with his coffee so I joined him with a nice cup of tea and creamer. Clemson had gone back to bed. We read some blogs, checked our data usage and laughed at the amount we have left for these last 2 days.

Bill hopped in the shower and then we made another hot drink and took a package of 4 warmed cinnamon rolls with cream cheese icing. Pat asked if I got a picture of them, but no, we all dug into them before I even thought of it. Wow, they were a nice treat for a change. We ate them with a fork, if that gives you any indication how ooey, gooey delicious they were.

Pat had plans for the morning and shared them with the rest of us. Of course, I was totally on board with going to the Goodwill Thrift Store and the guys had promised to take us before leaving the area. Woohoo! They dropped us off and drove on to Harbor Freight, such a hardship for both of them, and returned within the hour.


Us girls enjoyed walking around the store checking things out and I tried a few things on. Most, other than a couple of things, were left behind. Let’s just say what I did buy is encouragement to lose some of my belly fat over the next year. We’ll see how that goes. I was quite surprised when I checked out that I had picked up a gray ticketed item, meaning it wasn’t $4.99 but instead $1. Even Clemson lucked out with a new Christmas stocking since his felt one fell apart last year.

The boys were in the parking lot when Pat and I walked out and we headed back home for lunch. We just snacked in our Suite and I think Rob and Pat snacked in theirs before we met at 1:30 and drove across the river into Laughlin, Nevada. Bill and Rob wanted to tour Laughlin’s Classic Car Collection at the Riverside Casino.

Pat and I took our Player’s Cards and did a bit of gambling. I was doing pretty good on the penny machine, up and down a bit for over half hour. I didn’t walk away with anything I didn’t go in with but I had fun.


When the guys joined us, we decided to accept Pat and Rob’s offer to share in the free dinner buffets they received for registering. Buy one get one free. It was only 3 pm so Bill drove through Laughlin along the west side of the Colorado River and around to the backside of the gambling city. It was raining and windy but we all enjoyed the views before heading back home to the park.
At 5 we met again and went back for supper at the Casino. Bill and I had eaten there last year with Donna and Gerry and you can’t go wrong when 2 people can dine for $15.95.

It was a great meal and although I had too much food on my plate each trip to the buffet, I only ate what I liked and was happy to try a few new foods. Who knew I’d like artichoke salad? We tipped the waitress and after a leisurely hour and a half, drove back home.


The rain had stopped and it was a mild night of 62F/17C. We said our goodnights and came inside to read and I finished today’s post. It was a wonderful day from beginning to end and we shared a lot of laughs. 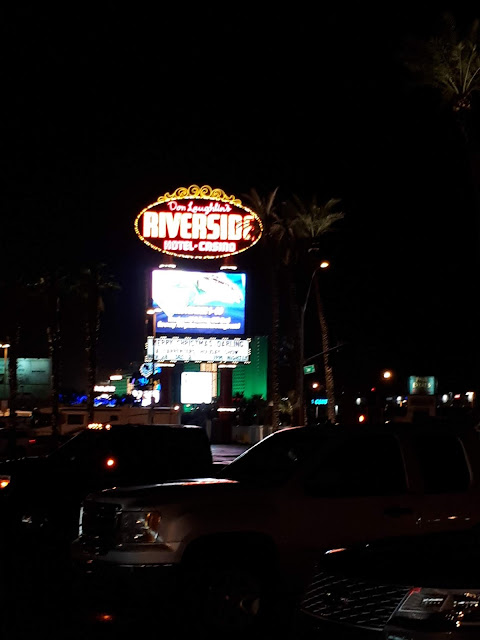 Rob and I can banter with each other all we want but Pat and Bill win the prize for teasing each other. Rob and I just sit back and laugh at the two of them. At one point, walking across the lot to Black Beauty, Pat came close to being thrown in a puddle. A little puddle, since she is just tiny. We do have fun. I think I’ve said that before!

I hope you had a good day. Thank you for stopping by.

Posted by Patsy Irene (Chillin' with Patsy) at 8:50 PM