Waking up Near The King, Sun Studios, Beale St.

It was 6:45 when we roused ourselves to get out of bed on Thursday, Nov. 1st.
We’d been laying in bed listening to the jet rumble from the airport, some thunder too so not sure which we were hearing. There was rain throughout most of the night, and according to the forecast we would be getting it for much of the day today. The temperature was 18C/63F so mild at least.

Bill and I made our coffee and tea and I read blog posts on my laptop. Bill is having difficulty with his and we need to get it in to Best Buy for the Geek Squad to have a look at it. Frustrating, these technical ‘appenditures’! He has not had access to it for a few days now. We’ve been talking about a new one for him, it is coming up 8 years old, but weren’t quite ready for that yet. Hopefully, it will be a much less expensive fix.

At 8:15 we walked next door and had a coffee with Rob and Pat while discussing plans for today and tomorrow. The weather plays a part and with rain until early afternoon we made a couple of decisions agreeable to everyone. That was easy! Back at the Suite, I was happy to cook us a good breakfast of bacon and eggs. I had my egg on rye toast and it was delicious! It is hard to eat ‘well’ when you’re travelling unless you eat out. 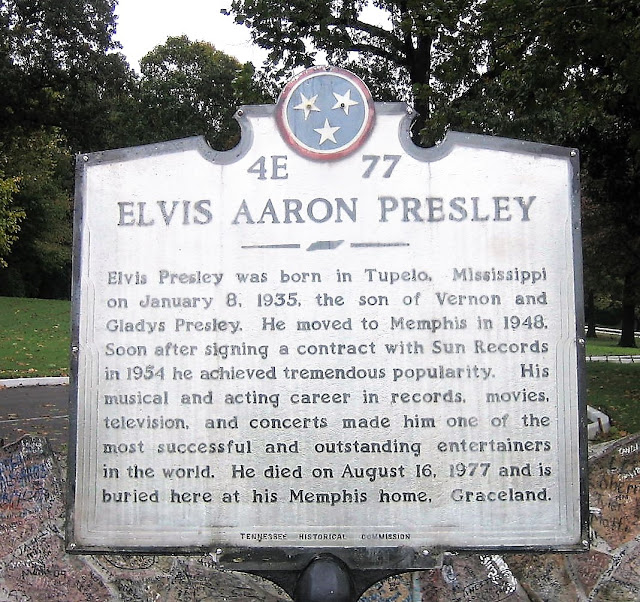 We cleaned up dishes and I took a walk in between the rain showers to check out the park. Bill read for a while with his leg warmer (Clemson) on his lap and then he hopped in the shower. I would have mine tomorrow morning. It will be a sunnier day Friday and that is when we’ll visit the Graceland Estate. For the moment, I took a walk around this rv park that we are in. Stepping between puddles, the rain seems to have let up and allowed me to cover the perimeter.

When I returned, Bill told me Rob had walked to get us all tickets for tonight’s shuttle but I missed him and went in the wrong direction. I did get into the Ticketing building and poked around a bit without stepping into any of the shops. I did walk through the park store and saw a few things that might be interesting to pick up. I’ll check around first over the next day or two because of course, I need a souvenir or two! 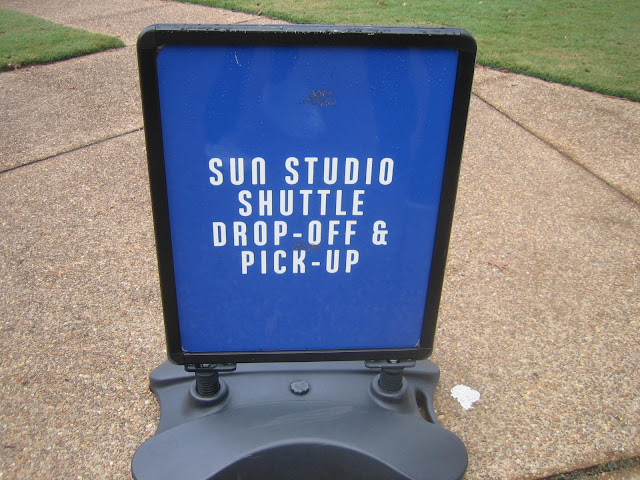 Just after 11, we all walked across to the hotel and down Elvis Presley Boulevard, crossing the street to Graceland. Oh my! 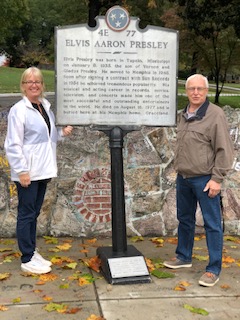 How can you expect what it will be like until you are standing at the gates where Elvis stood?

It was emotional for me, while Bill, Rob and Pat related memories, I had none – but this. It was nice to just put myself in the zone, no expectations, and get the feeling for where I was actually standing. Looking up at the Mansion, gave me tingles and I couldn’t wait until tomorrow for the tour.
We walked back and had 45 minutes before we could catch the Sun Studios shuttle so Bill and I went in to the park office and picked up a few small mementos. A nice lady who greeted us earlier suggested that we leave our jewelry behind and don’t be flashy when we go out tonight. Don’t attract unwanted attention, in other words. Good advice, advice Pat and I will heed. We teased about having to leave our $10,000 or $5 rings behind.

When we caught the shuttle at 1 pm, I was surprised that it was as far as it was to downtown and was grateful that we didn’t have to drive it ourselves and try and find a parking space. We tipped the driver coming and going and had a great tour of Sun Studios. Tiffany, our bubbly guide, took our ‘humdrum’ crowd on a nice trip down memory lane with a lot of history.

My main interest, of course, was Elvis’ story and how he finally got his signed contract in July of 1954 (a very good year!). It took him a year of auditioning and ‘pestering’ the staff at Sun as he hung around day after day, hoping to get his break. Some of his story, well, much of it, we knew but it was good to hear it from Tiffany. She had details that we weren’t aware of. 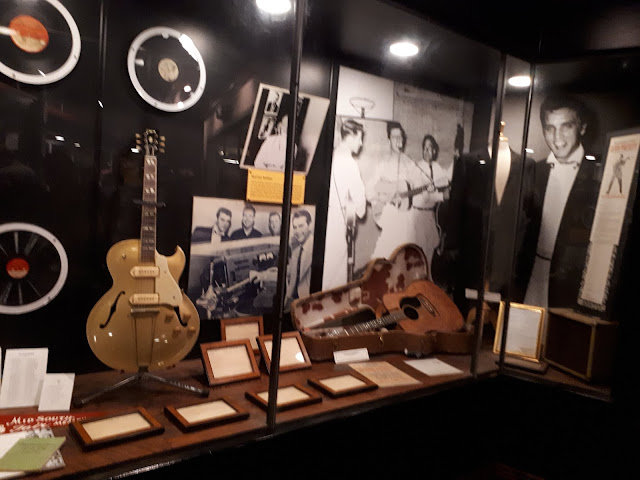 It was very interesting to hear about Sam Phillips and how he got his studio up and running only to end up 18 mths later selling Elvis’ music contract rights to RCA for $36,000 to pay off lawyers fees from a law suit. Turns out, copywriting litigations were a serious offense in the 50’s too.

Sun Studios is proudly a Mom and Pop business now and has been put back on track 24 years after it sat empty. Today, they still open the doors to aspiring young musicians who wish to come in and practice and make recordings.

We caught the bus back to Graceland Park on the 2:30 shuttle. Bill let Clemson out and proceeded to stretch out on his recliner for a snooze. I proceeded to make myself a tea and catch up on my post for today. The air was cooling off so I wanted to layer up before we leave tonight at 5:30. I think we all probably will. I removed my rings, earrings and necklace just to be on the safe side. I have to decide where to carry my wallet. I don’t want to carry a purse if I don’t have to. 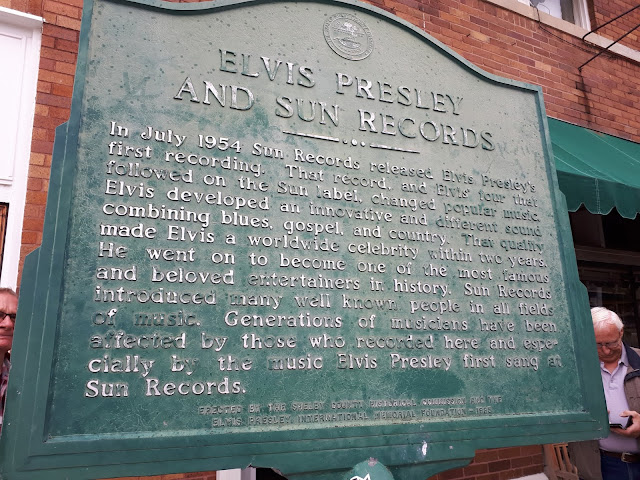 Everything found a place in my jacket and Bill helped by carrying my phone for me. We walked across Elvis Presley Boulevard to the Guest Hotel (kind of formerly called Heartbreak Hotel ) where we would get our ride to Beale St. The hotel was very fancy and I had to take some pictures of the furniture in the entranceway. Our shuttle driver was prompt at 6 pm. She was a pleasant lady and it was a 20-minute drive to the Hard Rock Cafe where we all made our exit. 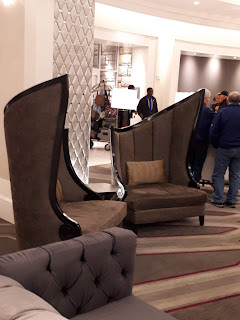 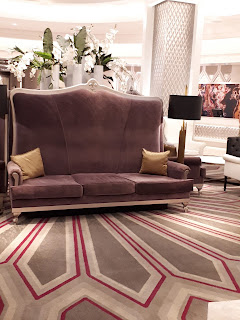 We could be an hour, 2 hours, 3 hours or 4 hours and we could get a ride back home. What a cool street, blocked off for 3 blocks so we could walk down the centre. It wasn’t crowded and we were thrilled to not have to fight crowds. I loved looking from end to end to see the night lights, that is a cool time to go and the fact that we didn’t have to drive on our own was an absolute bonus!

My tummy was grumbling so we took the driver’s directions to Alfred’s bar and grill. There was live music from a 3 pc. band called Stax and they played Johnny Cash tunes. They were very good. 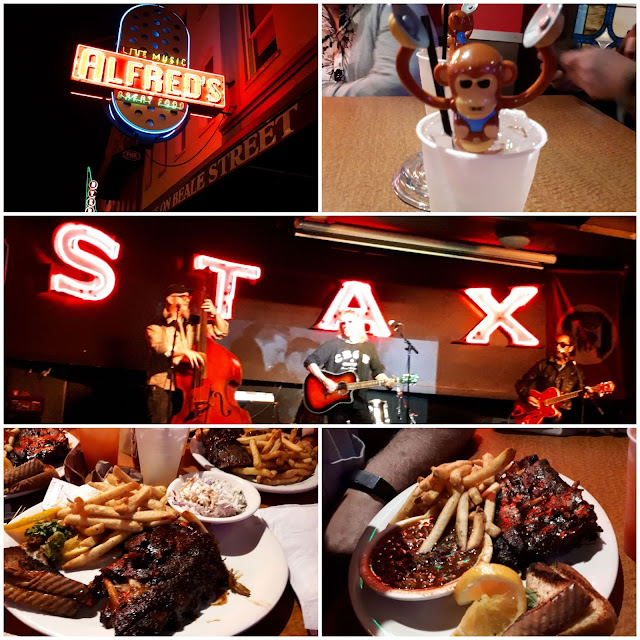 We sat back at the windows and ordered expensive drinks and very reasonable entrees. It was a fun night out so we splurged a bit. Pat and I ordered the Funky Monkey with rum, pineapple, and banana and they came with what else? A funky monkey!

We laughed and enjoyed the music plus each other’s company. We all ordered the half rack of ribs and fries and it was a delicious meal that cost just under what our drinks cost. Woops! It was maybe 7:30 when we walked out of the restaurant and carried on down to the end of Beale. Turning around, there was a bit of street dancing going on……….well, okay the girls dancing on the bar were kind of addicting and it was me dancing to “Country Girl, Shake it for Me”. Hey, it was fun!

We stopped in a souvenir shop where I bought a Beale St. pin before we all caught the shuttle at 8:30. We had a bit of fun on the ride chatting with a family from England who live in New Zealand. Mom and Dad, son and daughter-in-law. They were traveling to quite a few places on this trip and leaving tomorrow for Cuba and Mexico.

We teased that Angeline, the son’s wife and a born and raised Calgary-an, had to sit on his lap because of a seat shortage. She soon acquired the nickname “Lap Girl’ and Mom asked me to post her picture. What a hoot! 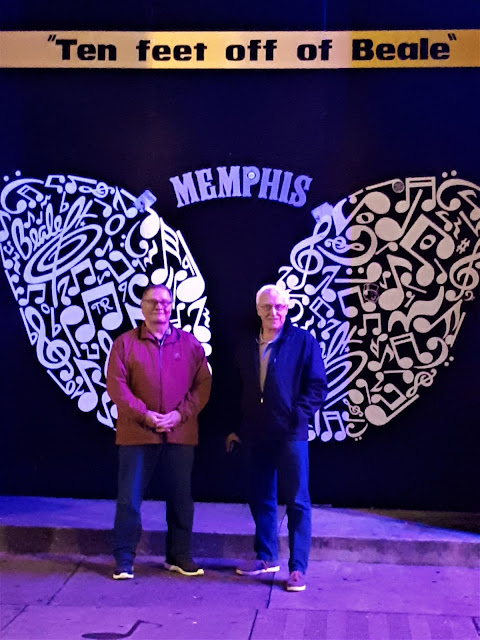 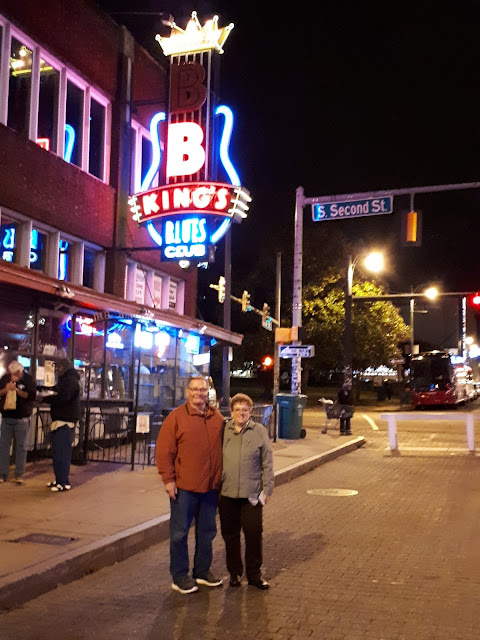 The driver brought us four plus one other couple back directly to the RV park instead of dropping us at the hotel. How nice! We said our goodbyes to Pat and Rob and came inside to chill for the remainder of the night. What an absolutely wonderful day this was with our good friends! I had a great time from beginning to end. I hope you also had a good one. 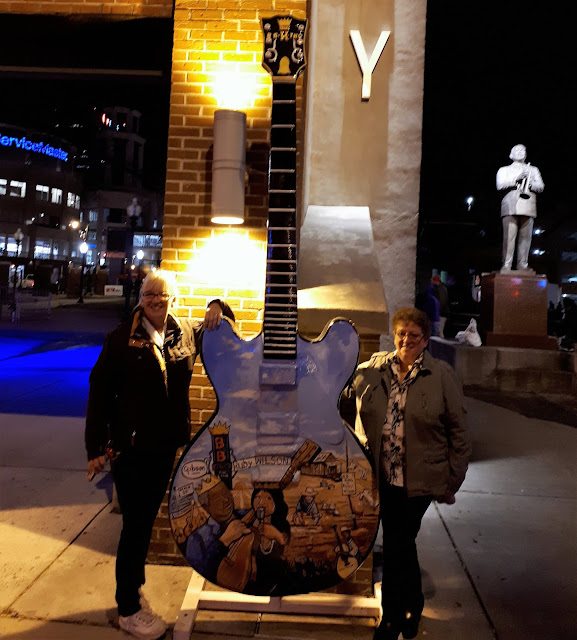 Thank you for stopping by today.

Posted by Patsy Irene (Chillin' with Patsy) at 7:55 AM