Tough Park to Leave Behind, Heading Further West, How Did We Get So Lucky? (Did I speak too soon?)

After a wonderful night’s sleep with some pleasant dreams mixed in there, I woke on Saturday, Nov. 17th at 5. Bill seemed to be having a great sleep so I rested until 6 before getting up to have my shower. Oh, that water pressure is AWESOME! 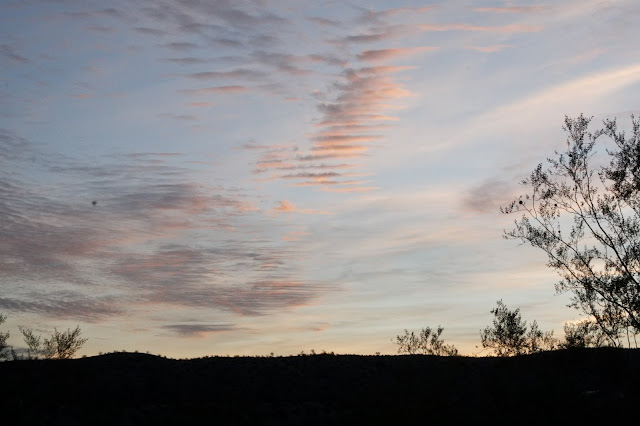 Before stepping out of the shower stall, the last person is required to wipe it down either with a micro cloth or the squeegee. This keeps it clean and sparkling that much longer before it needs a real good scrubbing.  Just as I began this act, Bill called from the bedroom that he was having a shower too. Just in time, I stopped the wipe down. I made my tea while he was otherwise detained and then he joined me at the table.

There is a recycle program here and the bins are in between our site, B17, and Rob’s, B18, so I took the plastic bottles and cans out of our garbage and walked them over when Clemson needed to go out. He was up at 7 this morning! That was a switch from yesterday’s sleep-in. It is moving day so we both had a bowl of cereal early. Looking out our back window and all around, we will be sad to leave this park. It has provided us with some amazing views and we couldn’t have better sites.

We all agree that it would be nice, even without the immediate cell/wifi reception, to stay here for 1 – 2 weeks at this time of year. Our destination today is about 4 – 5 hours away (to be determined as we get on the road) and we have both been there before (us and the Aljoes) but never together so it will be another ‘new’ adventure. We are certainly enjoying each other’s company, presence, support and knowledge and at the same time not cramping each other’s style or space.

We pulled out of the park together at 8:30 and not far down Alamo Road, we slowed down to take pictures of a couple of pretty burros that were crossing the road. I texted Pat to explain the slow down so they could watch for them too. Such a nice morning at 54F with wispy clouds brushing across the blue sky.  The drive from Alamo Lake to Bullhead City today was absolutely gorgeous. There isn’t much else to say about it. 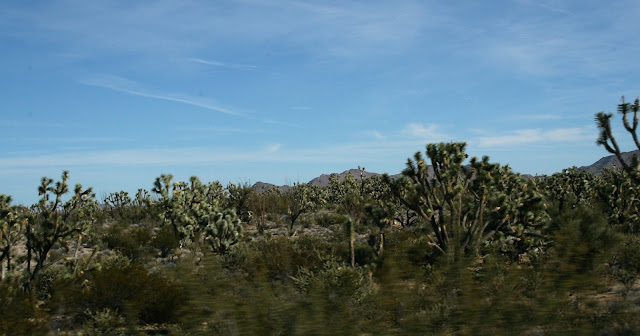 With a stop for gas early at Aquila put a dent in our pocket book but at least we were topped up with enough fuel to get us easily to our destination. We received a nice welcome by a couple of locals. 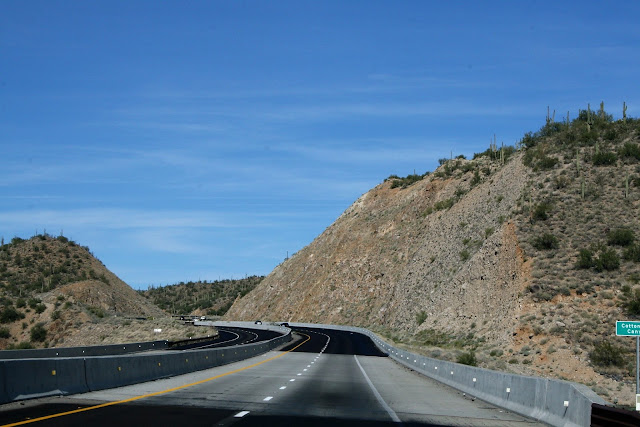 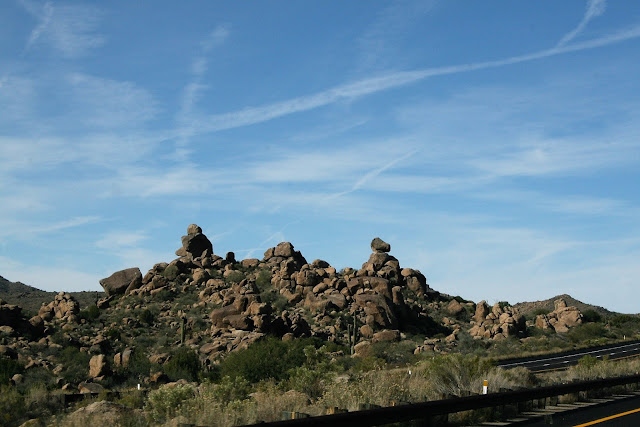 By 11:45 we were all ready for a pit stop since we’d bought a coffee at the gas station. While we were there, we ate our lunch and bided our time because we couldn’t check in to the park until 1 o’clock at the earliest. They tend to charge you a fee if you are earlier than that. At least they did one previous time. 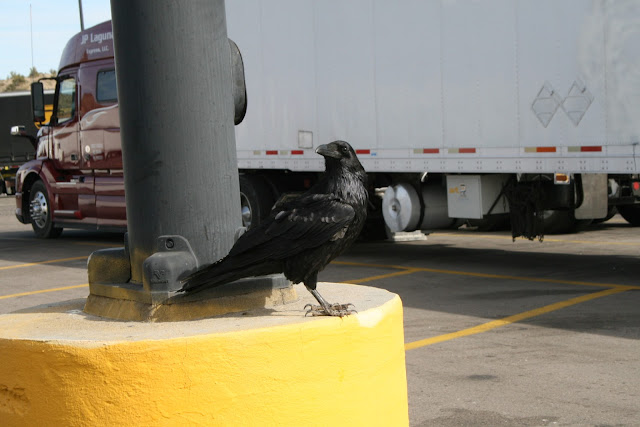 The boys went in the store to purchase some things they needed to get their cb’s up and running. Pat and I stayed outside with Clemson, watching the huge ravens hovering around us. They seemed interested in our apple, orange and sandwich but when we tossed them a piece, they were fussy and wouldn’t eat it. Who ever heard of such a thing? Fussy ravens!

We followed Rob and Pat into Ridgeview RV Park and immediately, Bill and I noticed a variety of changes that have taken place since we were last here in November of 2017. We knew that at that time, new owners had taken over the park and we were told that there were big changes coming. One of the changes was regarding the pool. They had heated it last fall and that was wonderful. I sure hope to be using it over the next 9 days.

The park is looking awesome and I can’t wait to get out and walk around it tomorrow. We have been so blessed with so many things on this trip and it is almost as if ‘all good things must come to an end’. I mentioned early on that a cable broke on our bedroom slide. We have been lucky since then to have no issues bringing it in and out each time we needed it.

Today, as I put it out, our blessings ended. The slide-out only went half way before it stopped completely. When Bill had a look, he said that a second cable had broken. It gave us enough room to squeeze into the hallway, bedroom and most importantly, the bathroom but it was a tight squeeze to say the least. We finished setting up, Bill outside at the satellite dish and me inside undoing clasps on cupboard doors. 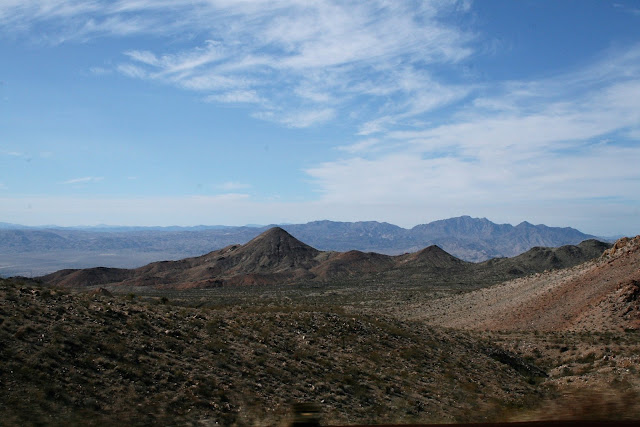 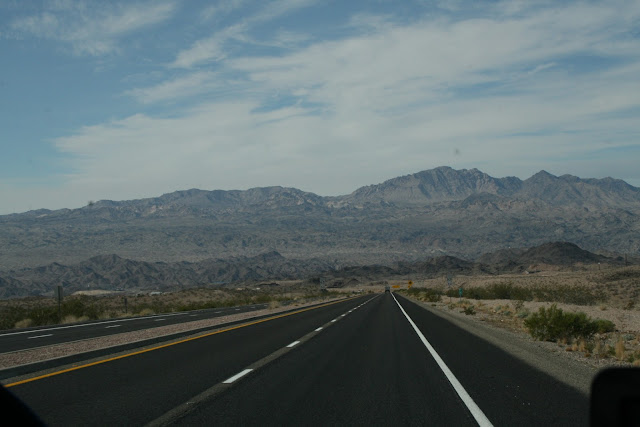 When the boys were done, Rob announced that he and Pat were stopping for a glass of wine. Well, before he knew it, he was inside helping Bill and it was Pat and I that carried on the Happy Hour while they worked, tirelessly. The quail paid us a visit, many of them and Pat was thrilled. She had never been so close to them before nor had she heard their charming chatter before today. She enjoyed watching them up and down the hillside behind us, snapping pictures.

The guys stopped working on the slide and Rob informed me that they got the slide out for the night. Together, they found a solution and will have to pay a visit to town for the necessary ‘tools’ to finish the job. Rob said ‘Difficult, I can do, Impossible, it will take longer’. I’m feeling pretty confident that they’ll get this fixed one way or another before we need to pull the slide in to leave here.

We met inside their trailer for a drink together ant at 6:30 we headed home to cook supper. Bill barbecued us burgers loaded with bacon, cheese and all the fixings. I toasted the buns inside and they were delicious! We cleaned up dishes and relaxed for the remainder of the evening. It was 66F/18C at 7:30 so it was going to be a nice night for sleeping.

This has been a great day. It is unfortunate about our slide out but we knew it was bound to happen and had to be dealt with. We will enjoy our time here in this AOR ($9/night) park with full hookups and all the fixings. I hope you’ve had a great day too.


Thank you for stopping by. I believe we are caught up now!