The Ridge
On Monday, Apr. 29th my plans were to just relax. We’ve had a couple of busy days so I’m looking forward to just chilling. And with the temperature only forecasted to rise to 47F/7C that will be an easy thing to do. We’re tired of the rain and April 2019 will not go down in our books as a nice one. After hearing yesterday about the loss of a friend, we look forward to just focusing day to day on everyday living. However, I can still grumble about the weather!

We had our tea and coffee together, both up within half hour of each other. It was only 32F/0C and windy so no walk again. The sun rose and then by 8 promptly bid us adieu for the day. Bill drove to Durham to pick up a couple of things for the Hangar and also filled our 3rd 40-lb bottle of propane since arriving in Canada. This is mostly why we grumble about the cool weather; it is time to warm up already!! We do expect costs to be higher in April and October up here on the Ridge though.

Bill worked out in the Hangar, putter putter, but couldn’t put the paint on the Stinson Reliant yet because it is too cold. Scott and Ellen had a problem with their cords so Bill offered ours which meant he couldn’t plug the electric heater in. No big deal, when he gets too cold, he’ll come inside. They took off for the day to Owen Sound where they have a storage unit. They had a big house and lots of furniture that had to be stored while they travelled for the winter.

We’ll see them at the end of the day for sure and Ellen has graciously extended an invite to join them for supper. They want to thank us for offering them a place to stay for a few nights. That’s nice, another night I don’t have to cook! Bill is taking me out………..across the lot! 😊 After making us bacon and eggs and cleaning up dishes, he went back outside and I bundled up and walked down to bring the recycle bins back. Our first garbage pickup.

Inside, Clemson slept up on the bed with my sweater and I got back into my book. By the way, the keto cake yesterday was a hit. I still have leftovers but enough was eaten that I know it was enjoyed. There were a few glazed carrots left too which I’m happy about since I really like them. I’ll think of my buddy, Pat, when I eat them as she loves them too. I would have liked to know Rob’s opinion of the cake but it will be gone before he returns.

Bill is holding his opinion of the cake but I’m sure it is because he overheard me tell Cathy that it was keto. Things like that flavor what would otherwise be a true judgement. Silly guy. Anyway, it has cream cheese icing and I like it so can eat it guilt free even if he doesn’t. We were getting a bit of a hunger on but not for much so I cut up an apple, Bill cut some cheese and we made ourselves a cup of tea. Bill had a few Ritz crackers, which I avoid, with his cheese.

We sat for the afternoon inside in the warmth and I managed to finish the Stuart Wood’s Short Straw. It was a fast paced read with short chapters and I really enjoyed the mystery involved. Now, I had to find another one to move on to so I had one more by the same author that I hadn’t read. Maybe I can zip through another one just as quickly.

Bill falls behind in his reading once we arrive home. With his days working and stuff to do around here, there isn’t the same amount of time during our Ridge time. My cupboard and under the bed stack is lessening and his is filling up.  I decided to make some cookies but because we’ll just eat them (!) I wanted to make something that wouldn’t be bad for us.

George from Our Awesome Travels posted over a week ago about his grandson who is into writing a blog. One of the posts I read of Dave’s was a recipe for peanut butter cookies that he made. It was simple and although one of the 3 ingredients was sugar, I knew I could substitute it with Splenda. I only hoped that because of the different texture that Splenda has compared to sugar, they would turn out just as good. So, I made a batch.

The first dozen and a half turned out great. I liked them, Bill liked them and other than them being crumbly (solved by putting them in the fridge) we were both very pleased. Thank you, Dave! Since I still had the ingredients and mixing bowl on the counter, I made another dozen and a half. This is a recipe I will keep and repeat and I don’t even need to write it down. Check it out here if you are interested, but I won’t take credit for it.

At 3, Bill looked out and said ‘it’s snowing!’ Here we go again, we thought. What crazy weather. Watching it come down as wet flakes didn’t give us too much concern until it continued and the white stuff was sticking to the ground. LOL We heard from Ellen and Scott around 4:30 that they would soon be on their way and so we were a bit concerned of what they had to drive through. It was pretty white out there for a while and roads can be tricky for driving.


Just after 6:30 we joined them in their Ultrasport home for Caesar salad, garlic toast and chili. What a treat! Thank you guys, it was delicious and we enjoyed sharing the air space with you again over wine. 😊 It was around 9 when we said our goodbyes and walked back to the Suite. The last hour of The Voice was on so we watched what we could of it but neither of us saw much through our eyelids. We let The Enemy Within record on the pvr and at 10 we went to bed.

It was a lazy day for us although Bill did accomplish some things down in the Hangar. The snow was gone by the time we left our neighbours motor home last night so that was good to see. I’m still waiting for a bit of warmth. It didn't get to the forecast high for today and now instead of wishing for too much I’d even be happy for something in the 50’s/(double digits in Celsius). I hope you had a good day too. 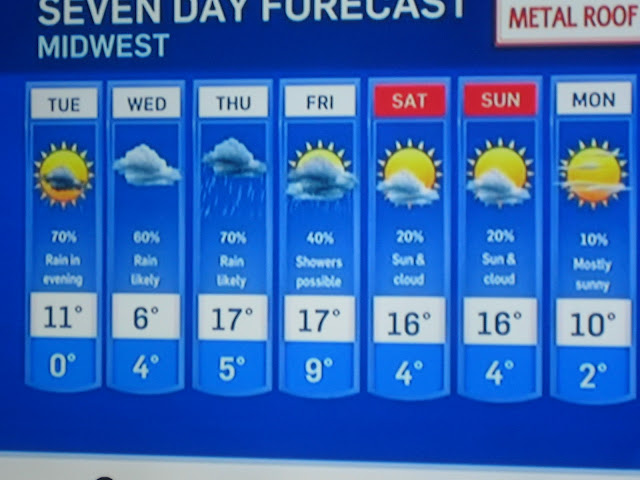 So can someone tell me what the yellow thing is?
Up and down in the days to come but it's better than down, down, down
This looks promising!

Thank you for your visit. Your comments are always read and appreciated if you wish to leave one.

Posted by Patsy Irene (Chillin' with Patsy) at 5:43 AM