The Ridge
It was nice on Sunday, Apr. 28th to wake up to blue skies and sunshine. We slept in until 6:30 and it was closer to 7 when I gingerly did some stretches before getting up and dressed. Bill had just made his coffee so I made my tea to join him. All thoughts of walking when it is 32F/0C disappear as soon as I see the wind. The wind speeds are much less now, blowing around the 5 to 10 mph mark but it is still darn chilly blowing in your face.

I had things to make today for our gathering at Rockwood Terrace. My family, as many as can come, are meeting to celebrate our Easter and especially Mom’s 93rd birthday. Her birthday was on the 17th and it was quiet for her so we try and do a family get together each year. There are many things playing a part today so we don’t know how the afternoon will go. I am baking Keto chocolate cake with cream cheese icing as well as a dish of Glazed carrots.

Bill went down to the Hangar and began to install an electrical panel , light boxes and outlets.  That keeps him out my hair while I take up the island counter space in the kitchen. By 10 things were mostly done with the exception of icing the cake with cream cheese frosting. I had clothes that I brought home yesterday, (surprisingly not too many! ) that needed to be put away. Yay!

I took the equivalent to 5 bags for donation so I was a good girl. I was very particular in the things that went into the box. Other than swapping out a couple of jackets, I shouldn’t need to weed too much more out. We have another spring exchange, the next one in London at my girlfriend’s place so kept lots of things to take along from the leftovers. How we love our clothes swaps!

When I came downstairs, the carrots were done and I iced the cake so the prep part was done. We need to take our own plates and utensils as well as our own drinks. That just saves a lot of scrambling for one person. The toughest part is finding a cooler to carry everything since we have only one extreme or the other. I have the ticket! The box that I had clothes in will be perfect to carry everything. Clemson will stay home to look after things here since we are only going as far as Durham and only for 4 hours or so.
We are expecting overnight company for a couple of nights. Ellen and Scott, whom we met last year from the area and had a barbecue with, are returning home from a winter south of the border as well. The park they will plant themselves in doesn’t open for bookings until May 1st so they needed a stopover. Yay! It will be great to see them again and we can even offer them 15- or 30-amp plug-ins to power. They sold their lovely home just down the road here last fall, I think it was, so are full-timing. We should see them around 6 this evening and get them set up.

When Bill had toast earlier, I wasn’t hungry yet so at 10:30 I was ready for something. Trying to eat properly without doing bacon and eggs (our big meal is at 1:30) this morning, I cut up an apple with some cheddar cheese. It tasted great and along with my creamy coffee, it will keep me satisfied until we eat. When I finished that, I slipped my coat on and went down to see Bill before going out the lane and to the corner for a walk.

I had some nice ‘new to me’ clothes to wear and pretty much figured what outfit I’d wear today. An outing like this is the perfect time to dress up a bit. That’s why so many clothes, I don’t like the same thing over and over. Bill can tease all he wants but he never questions “are you wearing that again?” He has no need to. 😊 After Bill’s shower, he rested a bit and we were headed into town around 12:45 to meet our family.

We arrived first and Cathy drove in soon after. Bill and I walked up to the door and noticed that Mom had already gone up to her room after lunch. We really didn’t want to have her see us until everyone had arrived and we’d had a chance to eat the first course of our meal. She wouldn’t be hungry anyway and we wanted her state of mind to be as good as possible, not sitting idly watching us all eat. 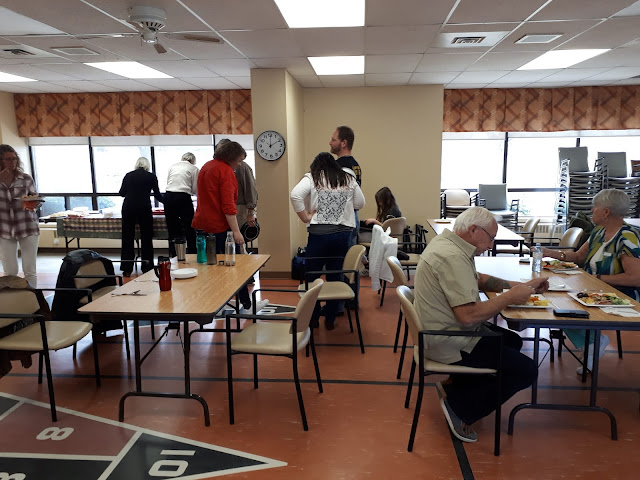 Today, was the smallest crowd we’ve had at one of these Easter gatherings but we made the best of it all the same. There was plenty of food, many different varieties of main course and just a few desserts. At 2:30, my niece, Joanne and I went up to get Mom. I didn’t think it started out very well when we found Mom in the hall and eventually talked her into coming downstairs, however, once we walked in to the auditorium, all the greeters turned her around.

We learned last year that having name tags would probably help Mom so Donna brought some along. As it turned out, after Cathy, Bill and I set up tables and chairs, only 14 of us were in presence. You just never know! Mom enjoyed having dessert with us and seemed to be in good spirits. I thought it was a good time for pictures and had set up my tripod and big camera. Mom seems to enjoy the picture moments and the whole idea of it even though she doesn’t keep them in her room. I got a group picture and then one of just us sisters with Mom.

We started packing up and a couple of us noticed that Mom was getting concerned about being left somewhere. Gayle and Cathy stepped in and took Mom up to her room and to save some upset, we didn’t say goodbye. Trust me, it was the best way to go at this point. The rest of us put chairs and tables away and waited for them to return. It wasn’t easy to say goodbye to her, apparently, and they came back with sad faces. Poor Mom. The only consolation is that she won’t miss us for long and she will forget we were even there. ☹

We said our goodbyes downstairs and went our own way. Bridgette and Chris had the furthest to go, to Woodstock, with a 2-hour drive and Bill and I were the closet. I felt that the day went well although can’t help but wonder how long we will continue to do this. We’ll see. Back home, we unpacked the food box and cooler before settling back in our chairs. I read my book for a while and Bill tried to catch a few zzz’s.

While at Rockwood, we heard from our buddies, Rob and Pat, that they have arrived at the Hunt Camp on Manitoulin. They left this morning around 8:30. We’ll miss having them close by, me especially later in the week, but happy that they were able to go and get some things set up for the summer. At 5:15 there was a knock at the door and we thought it was our friends, Ellen and Scott. Instead, it was someone we’d never met before.

When my sister, Aj and Tom, comes for a summer holiday and spend time with Donna and Gerry at the Acreage, since they don’t have a trailer, they would stay at a bed and breakfast not far from here. They really enjoyed meeting the owners, Sue and Dan. That is who showed up at our door! Introducing themselves, we invited them in for a nice little chit chat about our story and theirs. What a lovely couple! I need to email my sister to let her know.

Ellen and Scott pulled into our lane around 6:30 and after hugs all around, they unhooked their tow vehicle and situated their motor home beside us. They will be staying until Wednesday giving us an opportunity to get to know them even better. How fun! Once they were set up, they joined us for a glass of wine and an evening of conversation. Their winter in the Florida area and ours in the Arizona area, tips about this and hints about that. It was a nice evening and when left they walked across the lot to their home around 9 ish.

This has been a 'mostly' good day from beginning to end. It didn’t get very warm here, maybe 11C/50F. We didn’t see a lot of family but it was great to see those that we did. We met new friends and reacquainted with friends we just met last summer. I hope your day was a great one as well.

Today wasn't as GREAT as I would normally say a day with family and friends would be. On the way to Rockwood this afternoon, I received a FB messenger message from a former co-worker in London. A very special friend of both Bill and I, someone very dear to my heart, lost his battle with cancer. We didn't even know anything about it.

Two weeks ago, while in London with Bill, I mentioned that we have to make a point to see him this summer. Mark worked with me for 30 years and Bill for 27. He retired in 2016, a month after me. He turned 55 that same month looking forward to a life in a new home he and his wife were building. I can't even comprehend how things like this happen. I will miss you in this world, my dear friend. Rest in peace.

Thank you for stopping by for a visit with us.

Posted by Patsy Irene (Chillin' with Patsy) at 8:06 PM