Pilot Knob RV Resort, Winterhaven, CA
When Bill and I got up on Tuesday, Dec. 17th it was somewhere between 6:30 and 7 am. Can’t really be sure. When he finished his coffee, it was close to 7:30 and even though the 50F with strong winds didn’t appeal to us, we bundled up and went out for our walk. It was a chilly walk, I’ll tell you! We only went around the perimeter and up and down a couple of lanes at the front before hi-tailing it back home. It was just around the 1-mile mark and we were happy with that.

I had my tea when we returned and boy it was lovely inside the Suite. We weren’t expecting very high temperatures today but the sky was clear with beautiful sunshine. Not a cloud in sight. Bill had a yogourt and I texted Jo-Anne to wish them good luck with Higgins. The little guy was getting a hair cut today and none of us really know how those experiences will turn out.

We wanted to go into Yuma to get some cash at CVS (the Allpoint machine), pick up a few groceries at Fry’s and some other shopping so left around 8:45. First stop was the grocery store where we picked up what we needed and then when I saw the pork tenderloin offered Buy one Get one free, I searched for the smallest and put two in the cart. What a great deal! It will make at least 6 meals for us for $14.

CVS was next, then we drove to Bill’s Hobby Store for RC stuff. While he was in there, I popped in to the Big Lots! Store. I’d forgotten what kind of a store it was but remembered as soon as I stepped in the door. They have a furniture section with some really nice recliner chairs and love seats but they were all rockers as well. We don’t want a rocker chair at all, they are nice but just not our preference. Prices were quite good in there.

Bill and I then walked around the corner to Harbor Freight and the 99¢ Store. You know who went where. I was able to find some stuffers for stockings and I think Bill found some too. We left there and drove home. It was lunch time and we were both hungry. Back home, we each had a coffee together and I made us a jam-packed omelette, stuffed with peppers, bacon, onion, mushrooms and cheese. (No jam) Yum, that was filling and very tasty.

Bill’s package yesterday was some RC battery packs and he needed to tweak them a bit.  With a purchase he made today, I helped him with the ‘tweaking’ and then we hopped in the truck and drove out the west side of the park. Ken’s car was at their site so we stopped to see what they were up to. When they said they weren’t busy, we invited them to join us for a drive to Old Plank Road. It is just down the road from here in the Imperial Dunes area. This is a historical landmark worth seeing.

Bill and I had never been so this was a treat. Ken helped with some directions as there were a few lanes to turn into. The wind was cool and I was only dressed in a light hoody, capris and bare feet in crocs. Totally not prepared for too much outdoor walking. However, I was so intrigued that even though it is a small viewing, I had to get out. Kim and I climbed the small dune to get a better look at the Mexican/US wall. It has an eerie feeling to it for some reason.

On the way back, Bill turned left on the overpass rather than right onto W. Hwy 80. We’d been down this road before but they hadn’t so showed them Sidewinder Pass and the End of the World sign. This is in the 'blink of an eye' town of Felicity. Population: 2   You can read about it here, if you haven't already. It is an interesting story of how the town got its name. 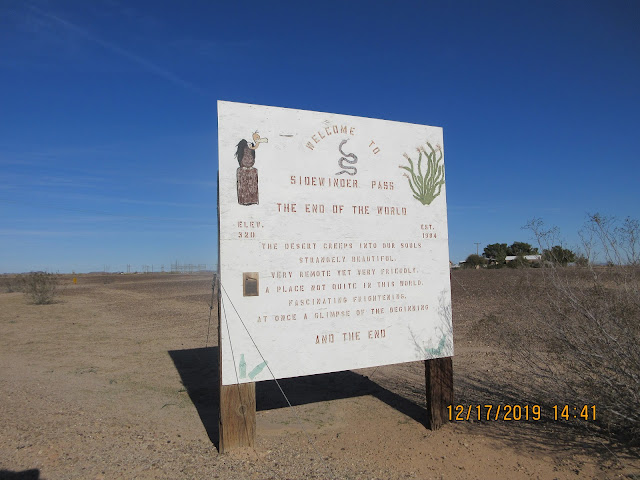 Then we drove on to the bumpy gravel road and took them to see the puzzling ceremonial grounds. We remember talking to a State trooper a couple of years ago about this and he wasn’t sure what it was, other than perhaps a native ceremonial ground.

Back home, we dropped the ‘kids’ off and Ken invited us to Happy Hour. It was after 3! I had to change into warmer clothes and made a cup of tea for me and a hot chocolate for my sweetie. We took our chairs back to their location and joined Bob and Jo-Anne at the front of the motor home, out of the wind as much as possible. Soon after, Dave joined the group. Cheryl was apparently baking up a storm. Good for her! I have yet to do some of that.

We chatted about many things, together and individually in pairs. Higgins was an attention grabber today with his new spiffy haircut. As Clemson did, after a cut, he looked entirely changed, like a different puppy altogether. So cute and I think he knew it, with his little Christmas scarf. At 5, the gang split up for supper. Bill lit the Weber and grilled 2 farmer sausages and I prepared a garden salad inside. We were eating before 6 and cleaned up for the evening soon after.


With The Voice (part 2) Finale on, I worked on my post. Bill is at his laptop too but I can’t guarantee that blog post……yet. He is sending an email of the dunes to our friend, Keith, back home. We can wait for that post. Patience is a virtue, right? This was a fun day and with fingers crossed, we’re hoping the wind dies a bit for tomorrow. It is a special day for the Suite.


Thank you for stopping in!

Posted by Patsy Irene (Chillin' with Patsy) at 9:07 PM