Yuma Lakes RV Resort, Yuma, AZ
On Friday, Dec 13th we were up together at 6:30. There were some low-lying clouds so it remained dark outside until about 7:10. After Bill had his coffee, we went for our walk together. We were curious to see where new friends have planted themselves in the park so did another perimeter walk. Dave and Cheryl of The View from Here arrived yesterday.

We will all be leaving here Sunday and moving to Pilot Knob for Christmas. I assume right now that they will be there through Christmas. We found their site and I left a painted stone on the running board of their truck as we walked by. Woops, meant to take a picture. Back home, I had my tea and walked up to advanced line dancing for 9 o’clock. On the way, I crept up close to Dave and Cheryl’s rv and snapped the picture I missed getting earlier.

This is the last day I will be able to attend the line dance class as they only do it through the week. I stumbled a bit with a few more new dances but I had fun and they weren’t critical at all of me. Taking the time to show me some of the challenging steps in the middle of a dance didn’t fizz on any of them. Nice people. As I was leaving, I told them that it was my last class because we were leaving on Sunday and they all said exactly the right things to make me feel good. 😊

When I returned to the Suite, Bill wasn’t around so I waited a bit, thinking he was next door. He’d told me that he wanted to eat breakfast when I got back so we could head into Yuma Market as early as possible. When he wasn’t home by 10:10, I texted him, asking where he was. He was visiting D & C and returned soon after. We had bacon and eggs, did dishes and hopped in Black Beauty by 11. The market parking lot was fuller than yesterday and we had one destination to check out inside.

We went in search of the vendor that was not open yesterday and then wandered a bit down one of the aisles. Soon, we left the market and drove to Walmart for some milk and more salad fixings. While there it made sense to check out chair covers, hoping to find another one like the one we bought from Debbie’s garage sale here. No luck and these things aren’t cheap! Gosh, we wish she’d had two the same. Back home, I changed into my bathing suit and texted Jo-Anne that I was going to the pool. She responded that they were already up there.

I walked up and since Bob was in the hot tub chatting with some guys, she offered me his lounger. There weren’t any others available and he didn’t mind sitting in a regular patio chair when he came over. Thanks Bob! The first thing I did was get in the pool and float around for a few minutes to get wet. Jo-Anne and I stretched out in the sun for half hour before they left to go back. They’d already been at the pool for over an hour.

Alone, I stayed and read my book, flipping from stomach to back getting the full coverage, don’t ya know! At 3:00 I took another dip in the pool, then the hot tub before heading back around 3:15. The water was lovely today. Bill, Bob and Jo were all over at the neighbours' for Happy Hour so after changing, I took my chair and drink to join them. There were 5 doggies running around, making friends and getting neck rubs where ever they could. They were fun to watch. 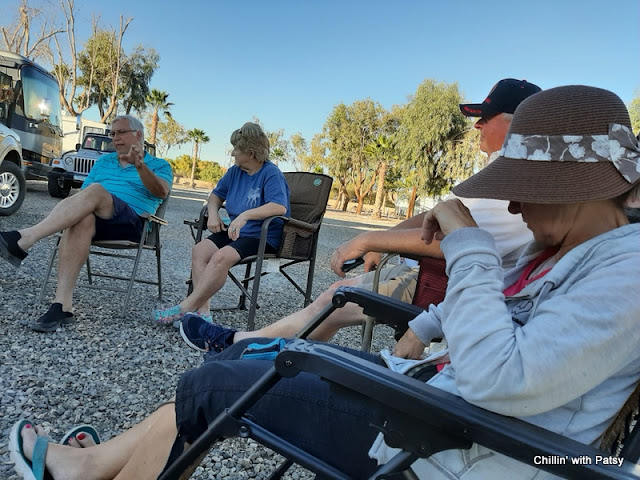 The conversation was such that I really didn’t participate and after an hour and a bit, I was chilled and took my chair home. Sometimes H.H. just don’t interest me. No offense. I made myself a cup of creamy tea at 5 and sat with my book. Bill returned soon after and the rest of the group also went their separate ways. At 5:45, I started supper. We had Caesar salad and shrimp poppers done in the air fryer. They were really tasty!

After dishes, Bill sat watching Live PD while working on the White Sheet crossword puzzle. I’d done all I could so I like to get his responses. He filled in a few as well. Today on the way back from Yuma, we stopped at the Park Office and picked up 2 tickets for the 50’s dance tomorrow night at the clubhouse. Erma, one of my teacher’s at dance class, was taking the cash and issuing tickets. I had a few laughs with her and her husband. She’s such a nice lady.

Tomorrow, I figure will be a pretty relaxing day. I’m thinking I’ll go to the pool and perhaps do a load of sheets and towels at the laundromat at some point but not much else. We won’t be quite as close to the laundromat at Pilot Knob so may as well take advantage, right? This has been a great day. The weather couldn’t have been any better, rounding out around 74F/23C mid-afternoon. We call that pretty much perfect!
Oh!Two other nice things happened today. Bill's sister, my sil, who volunteers in the kitchen at the Hospice in Stratford where our friend George is right now, stopped in to introduce herself. She stayed for a short visit and met Suzie as well. Thank you, Carol for taking the time to say 'hey' to our friend, when we are unable to. Check out his blog at geosuzie.blogspot.com to meet Carol.

Posted by Patsy Irene (Chillin' with Patsy) at 9:00 PM