Yuma, Arizona
Bill and I were up and mobile by 6:45 on Sunday, Dec. 8th.  We each had our showers and Bill made his coffee while I went for my walk. We hadn’t planned to leave until 9 so there was time to take it slow. When I was walking, I met a couple of dog owners with pooches that wanted to say hello so of course I got a couple of doggy fixes. Then I met Jo-Anne and Higgins so I got greeted by the little love bug too. 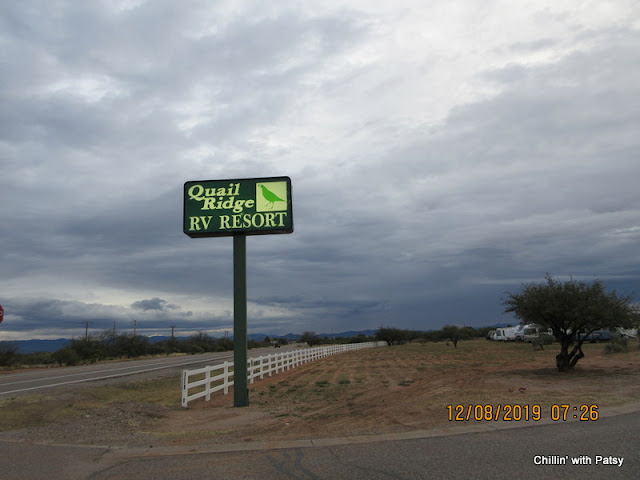 Back at home, I had my tea and Bill suggested I make lunch for the road. It would be 300 miles today so that was a wise idea. I made him a couple of sandwiches and myself a meat & cheese wrap and then we each had a bowl of cereal. Bill washed the dishes and we noticed our friends were already closed up at 8:15. Hmm, maybe they misunderstood our departure time.

So, without rushing, because they wouldn’t have wanted that, we just put a bit of a push on to get packed up. It was 8:45 when we were ready to go and drove around the loop to say goodbye to Kim and Ken on the way. They are also pulling out today, and we’ll see them next Sunday, if not sooner. It isn’t a very nice-looking day, with heavy rain clouds hovering and the winds up to 16 mph. Good thing it was a warm 54F though.

Leaving the park at 9, we got on Hwy 82 to Sonoita and then after turning onto 83, we went through the Border Checkpoint.

Bill stopped and chatted with the very nice young guard, asking about passports etc. before we moved on. From there we caught I-10W and it was a smooth drive. We took the exit to I-8W after Tucson and drove for a couple of hours or so before pulling into a parking area for a break. Bathroom and leg break. 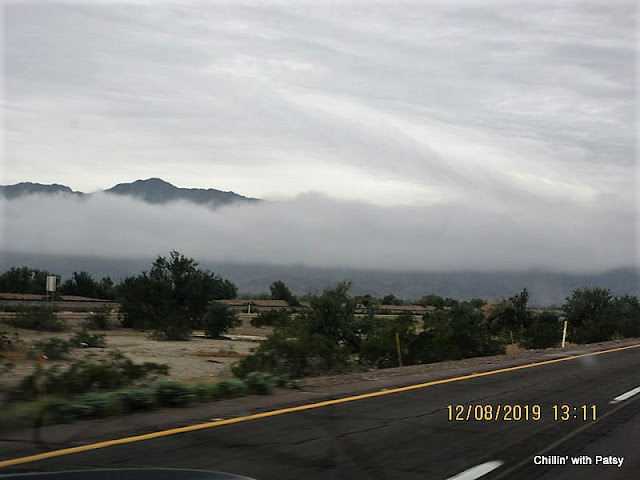 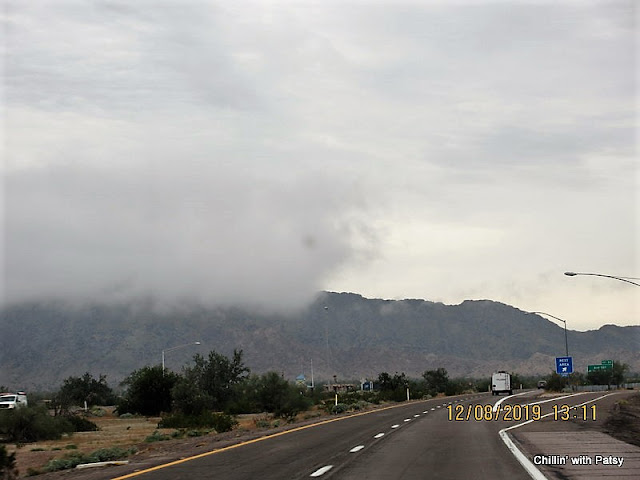 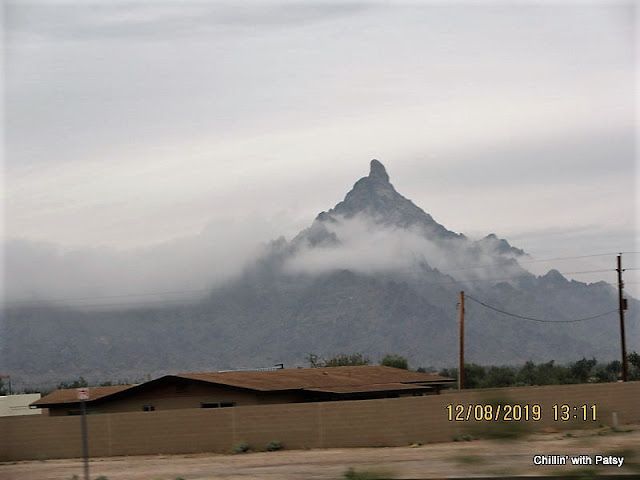 We all decided since it was 11:30 that we could just eat our lunch as we drove without having to stop again. We would be good for fuel so unless Bob needed it, we won’t have to pull off for that either. The temperature has been up and down just as the elevation has. We left Quail Ridge at 4,500’ and were soon skimming along at 450’. Over the next couple of hours, we were bouncing from 270' to 725' at the pass just before entering Yuma. Such beautiful views along here. Yuma elevation is 141' so we should experience warm weather this week.


As it turned out, by 1:30 we got a message from Jo-Anne that they needed fuel so pulled off at a Chevron near Tiacoma. The prices aren’t very good for fuel here so we can only hope they improve in Yuma. $2.97/gal for regular gas and $3.12 for diesel. That’s ridiculous and that isn’t even the most expensive.

Within 40 minutes of stopping, we took the exit off I-8 onto Fortuna Rd. to the north and then west on Hwy 95. Turning right onto Laguna we soon came to Yuma Lakes RV Resort where we arrived at 2:45.  This is a Coast to Coast membership park so $10/night, full hookups. It was now a mild, still cloudy 64F.

After getting set up, side by side, Bill got the satellite dish out to see how well we could find a signal. As it turned out, we only got one yellow bar, reading 77 again but it was enough to get the channels we needed. Jo-Anne brought our movie binder back over and they are hoping to use their antenna. I slipped on a light sweater and took a walk around the park before it got dark. It was spring of 2018 when we were here last so I’m happy to be here for another short time.

I told Bill that I needed to do my ‘ritual’ walk, something I like to do every time we enter a park. New park or not, I like to refresh my memory of what is here, where things are and familiarize myself with things we may need. First, I found the hot tub and pool, I’ll need that for sure! 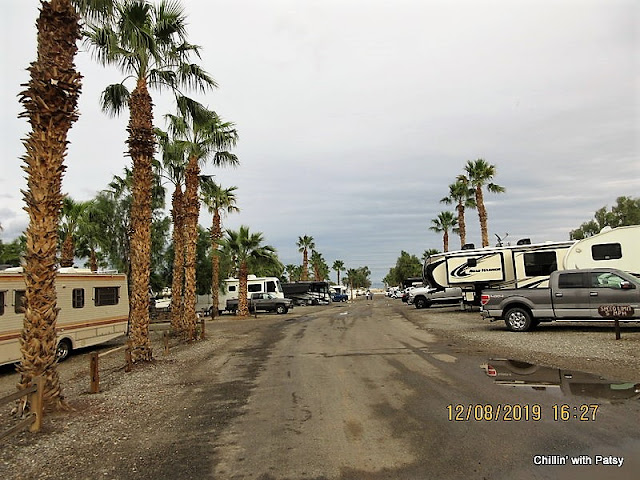 I walked into the clubhouse where the puzzles (there was a new 2000 pc. puzzle spread out on one table and a 1500 pc. puzzle ¾ done on another) and the books were. This is where free internet access would be also. 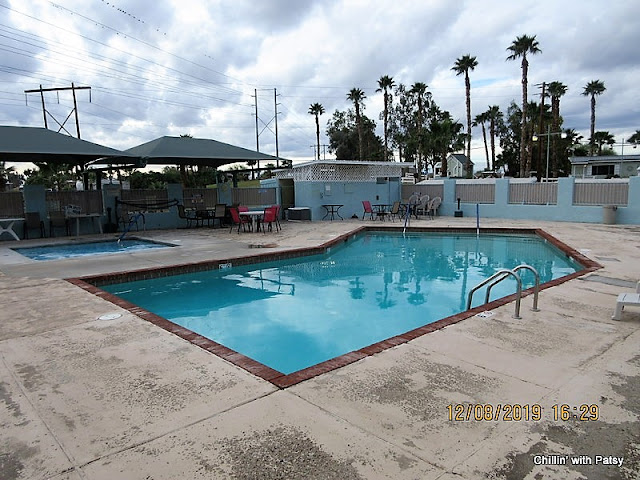 We are quite a way back from all of this stuff but you know that I don’t mind the walk. Back home, Bill was having a rum and Coke so I poured myself an iced coffee made with Rum Chiata and real cream. Oh my, good thing I added ice to it or I would be flat out! I drank it slowly and at 6 got Madame IP out to warm up the meatloaf. We had mixed vegetables as a side and required no dessert. There is ice cream if we chose later for a nibble. 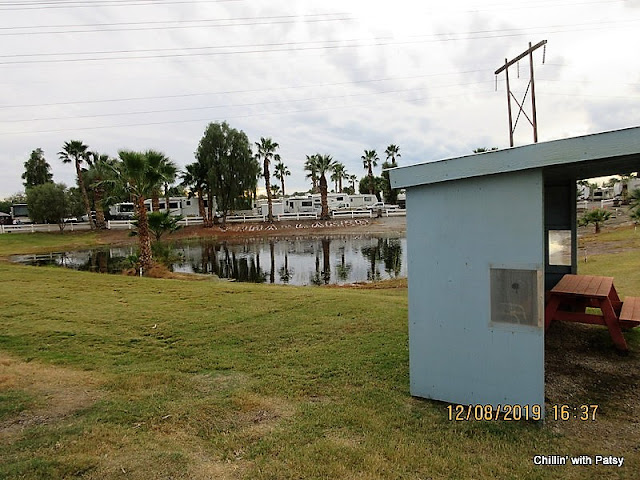 After dishes, I finished downloading my blog post and we sat and watched some television together. I might have opened my book a couple of times too before I couldn’t keep my eyes open any longer. This was a nice move day and we did hear that our friends’, Kim and Ken, have arrived safely at their new destination too. That is their story to tell. We are settled here for a week and that will give me time to experience the pool and some activities.


I hope you have also enjoyed your day. Thank you for stopping by.

Posted by Patsy Irene (Chillin' with Patsy) at 9:12 PM