Pilot Knob RV Resort, Winterhaven, CA
Monday, Dec. 23rd, (wow! Already!) we were up and at ‘em before 7. Bill had his coffee but I waited and when it was light enough around 7:45, we went for our walk. It was a mild walk this morning, around 54F/13C but no sun again. Today, the forecast was for a 50% chance of rain so we didn’t expect much for outdoor activities. My tea tasted extra good this morning when we returned.

However, saying that, Bill and I first walked to the clubhouse at 9:00 to put a sign on the big television for something special we’d planned this afternoon. Then we went to the bocce ball court and helped Gordon and Barb set up the table and chairs. Game start: 9:30. It was another great crowd of approximately 20 people and Gordon, who keeps the score sheet with perfection, made sure everyone got to play a game or two.

I got lucky, my first game with Kenny (not our Ken) and we won. Yay! That was a 2-way effort that paid off. Second game, Bill and I both sat out. Third game, we were up and my partner was the new friend we met at the Ice Cream social yesterday. Rick and I managed to pull another win out of the hat but that was a 1-sided game. He scored all the points. It was almost 11 o’clock and Bill and I hadn’t eaten yet so bowed out of anymore games.

Back home, I made bacon and eggs for our breakfast and after dishes, began mixing the ingredients for those Irresistible P.B. Cookies that Bill found the recipe for. Let’s just say he was happy. He had other things on his mind or he might actually have made them! Seriously! He wanted them that badly. Because of the little plan we had for 1 pm, he took his laptop up to the clubhouse at 12:30 and I covered the batter and followed him soon after.

I had texted all of our gang and asked them to meet us up there for 12:50. Our plan was to make a live video call back home to our good friend, George and his wife, Suzie. Many of you know them and also know of the situation that they are dealing with. Because he has come to this (and many other) park for 12 years, we had asked Cathy, a co-Manager of Pilot Knob, if we could use the big tv screen for a call. Her and her husband, Joe, also know George and Suzie well.

With permission granted, we all gathered and connected with Suzie by text. Unfortunately, from their end in Stratford, they could only connect with the video screen on his phone so even though we got a lovely big picture of the two of them, they had to view our group of 13 on a small screen. That part wasn’t perfect for them but he turned the phone to see everyone and say ‘hey!’. That was a fun half hour or 45 minutes and there were a couple of times when Bill and I fought back tears. It was good to chat with them both and he made us laugh and visa versa.

When we said goodbye to our friends and returned to the Suite, I finished the cookies. I don’t know how many the recipe made, maybe just shy of 3 dozen. They turned out pretty good with the exception of about 5 that got a little browner. Apparently, a convection oven doesn’t regulate heat, instead storing it for the next batch. I should have kept an eye on the ones at the back. Cookie sheets don’t turn in an oven like this.

At 3, the cookies were done and cooling on the island so we made a hot drink and walked back with our chairs to Dave and Cheryl’s site. It was windy and chilly and maybe it was us ladies with our hoodies up that prompted Dave to be a gentleman and offer us warmth inside their Cedar Creek. I don’t think we hesitated too long at all and all 10 of us squeezed indoors. It is amazing how many you can actually fit in our units. And comfortably so.

Dave had made a batch of his 8-layer dip so of course we all got to taste it with crackers and pretzels. Hmmm, very good! Again, conversations ensued all around in the ‘OptiCreek’ (is that right?) and at 5 it was time to go.

The winds brought rain and by the time we left, the sky to the southwest were clearing. It was a pretty sight as we walked back home and then I had to slip out as the sun (which we hadn’t seen all day because we sent it home to Ontario – apparently) made a spectacle of setting beautifully.

Over there somewhere, towards Mexico in the free space, my sister and her husband were set up for a couple of nights. They arrived while we were being happy here in the park so I’m relieved that they made it safely from Casa Grande today. This is a nice surprise and we’ll catch up with them tomorrow. Bill and I sat and caught up on our blog posts. Yes, Bill is working on another one today. 😊

We had kind of planned on burgers for supper but with the rain and winds, changed our minds. That is an entitlement and as long as we agree on something, all is good. I went on a search in the freezer. Aha! Mini sausages would be easy to thaw and cook plus a can of Van Camp’s brown beans. We did have a nice snack at Happy Hour so the hole in our tummies isn’t too large.  That actually worked out really well, we enjoyed the pauper’s meal very much. Ha ha 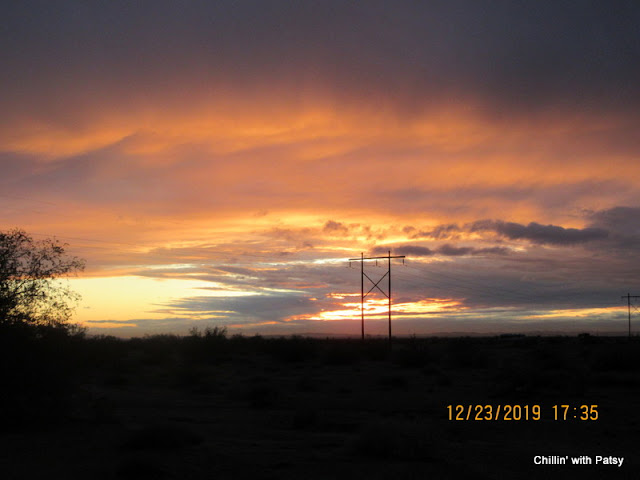 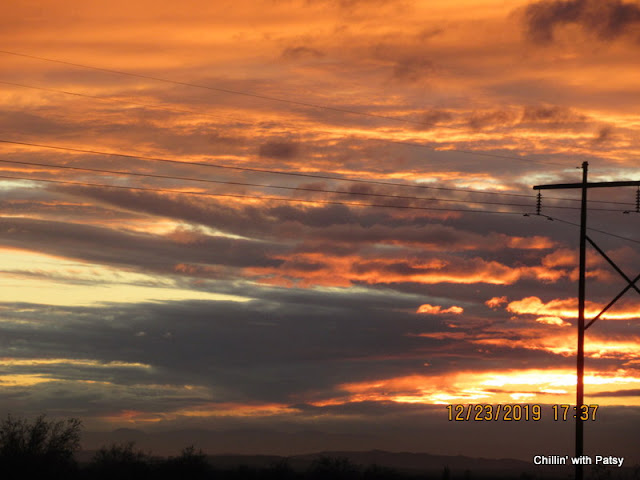 After dishes, we watched tv together and dessert was a topic that may or may not arise later. This was a good day, we got some exercise with bocce ball, had a great ‘visit’ with George and Suzie and a fun Happy Hour with friends. I’m looking forward to seeing my sister tomorrow sometime.

Thank you for your visit with us today.

Posted by Patsy Irene (Chillin' with Patsy) at 9:01 PM