On Friday, Dec. 27th, I was awake and up first. Simply because I was in bed first last night. Bill wasn’t far behind me getting up and after I’d read a bit of my book, he was in the shower and then joined me downstairs. We walked our walk after he had his first coffee. It was 8:00 when we headed out and decided to go out the park again and down Hwy 80 to the west this time.


We walked a mile before turning back to face the warm sun. It was only 47F/9C but very low winds so not bad at all. We were quite hot when we returned home. I had my tea and we played some Scrabble with each other on our online games before walking over to say goodbye to my sister. Gayle and John were packed up shortly after 10 and that was a good time to wander down.

All rv’ers know that you should never try and visit while others are in the midst of setting up or tearing down. That is courtesy and helps to avoid distractions that create accidents. For me, I know that it only takes one bad experience when trying to get parked in a spot to ruin the whole set up process. The rule is after a quick greeting, please stay away until set up is complete. That applies to us too when friends arrive.

So, after hugs goodbye and a picture of them with their rig, we walked back home. Bill got his Timber plane out as he wanted to fly it while Dave was still here in the park. Dave had never seen it fly. Too bad Ken wasn’t around and as it turned out, the flight was very short. Bill said the old battery wasn’t holding a good charge anymore. Dave was impressed and I was too as it has been a while since Bill has flown and, on the gravel, it was a new experience.

We decided to just have toast and/or oatmeal for breakfast as we wanted to get into Yuma for some shopping. I wanted to follow up on a sale for bath towels at J.C. Penney and I also wanted to check out Ross’s, just because. Bill dropped me at JC and after a long search, found the quick dri towels and face cloths to match. There were no hand towels of the same brand so I had to choose a couple of others that would match. 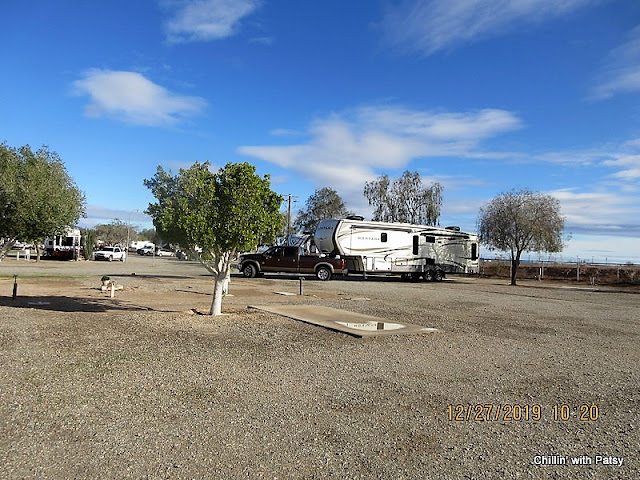 The prices were phenomenal! $5.99 for bath towels, $2.99 for hand and wash cloths and $7.99 for a bath mat.  Now, we are all decked out and can get rid of some of our old towels. 😊 I walked across the mall parking lots to Ross’s. It wasn’t ideal as I was carrying the large bag of towels but I knew he was off in a different area. I grabbed a cart and went on the search. The only thing I really wanted was a pair of running shoes. Mine, that I wear every morning, are getting pretty beat up even though still comfy.

I tried a few on, mostly the same brand, because the price was right. I settled on a black pair that are almost slip-ons but still have some laces too. They’ll do nicely! While shopping, Jo-Anne texted about Happy Hour at their place indoors, so a trend on these cooler days has started. Otherwise, we are all bundling up a little more than some of us are comfortable with. I passed the word on to everyone else since I am the one with everyone’s contact info. I said I feel like ‘Mom’. 😊 That’s okay!

Back home, I was hungry so had a piece of cheese, some yogourt and a fat bomb. At 3, we made a hot drink and walked next door. First to arrive, first choice of seats so I took a recliner and relaxed. Once everyone arrived, with the exception of the McMechan’s ☹, multiple conversations filled the air. Jo-Anne and Bob had food set out and I had determined that if I wasn’t hungry, I’m not eating, so other than 5 little nuts and bolts, I passed everything by. 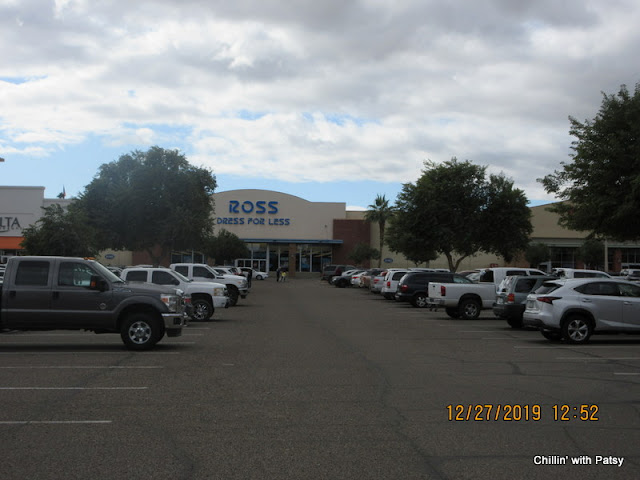 We returned home just after 5 and Bill lit the Weber. Tonight, were grilled farmer sausages with salad. Bill, while outside, dumped our gray water tank. Inside, I made salad on our plates. Opening a pre-made bag of Bacon Caesar salad is a tough job but someone has to do it. As the sausages were cooking, I had to run out to capture sunset photos. Ever-changing.

What a great meal! Just enough and we were full. There is always ice cream and goodies if we needed a snack later. The evening was quiet after dishes. Bill had the television on but Friday night entertainment doesn’t do much for us. I was into my book so after finishing my post, my goal was to get a few chapters completed. As it turned out, we were done dishes by 6:15 so I talked myself into the last scoop and a half of the Oregon Strawberry. Bill opted out. 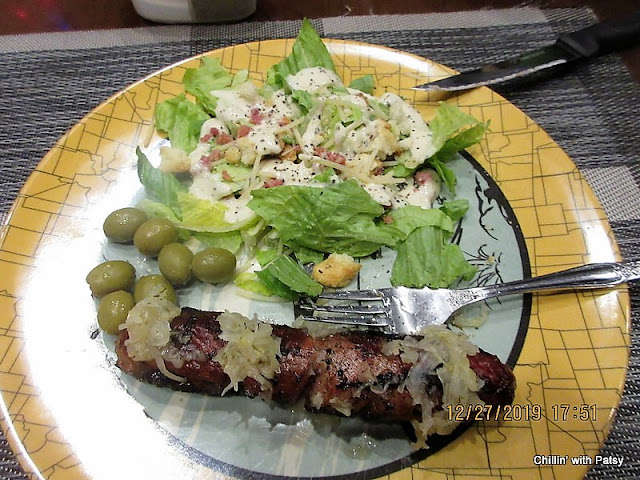 I have enjoyed this day. The sad part was saying goodbye to Gayle and John but there were good moments in shopping and our happy hour to make up for it. Bill and I are really enjoying spending time sitting still this winter, here. As the days arrive, there will be some calm days for Bill to fly his plane and drone and I’m sure some warm days for a pool visit for me. I hope you’ve had a good day.

Posted by Patsy Irene (Chillin' with Patsy) at 8:42 PM