Jacks Up, Wheels Down, Sunny Drive Further South, Collages of the Day

Bill and I were both up by 6:30, in and out of the shower with our first drinks by 7 on Monday, Dec. 2nd. We didn’t take the time to read blogs this morning. I didn’t go for my walk either. My choice, I wanted a shower instead. We shared my two cinnamon rolls from yesterday and packed the cooler with fruit and snack bars for the road. We’d planned to pull out between 8 – 8:30.


Everything inside was done and at 7:30 Bill went outside to take down the satellite dish. We had a neighbor pull in with a small Camp-Lite trailer. She was alone and seemed to be having trouble disconnecting. You know the rest of the story. Of course, Bill went over to assist which delayed our departure for about 10 minutes. We noticed Bob and Jo-Anne were hooking up soon after 7:30 and so I texted that we weren’t ready and why.
They went ahead before 8 to the dump station. I guess they were in a hurry to get out of here! Ha ha Unfortunately, they had to wait about 20 minutes and we joined them by 8:30 after dumping tanks at Desert Cove Loop. It is a gorgeous sunny day and a calm (as shown by the American flag) 37F day. I know we are going to warmer temperatures even though we will still be around the 4,400’ elevation mark.

We caught I-25S without going through T or C although that would have been a bit shorter. Who cares about a few miles if you are avoiding traffic?  We drove the 40 minutes taking the exit to Deming and Hatch. I used the walkie to prepare Jo-Anne for entering Hatch, The Chile Capitol of the World. She had her camera ready. 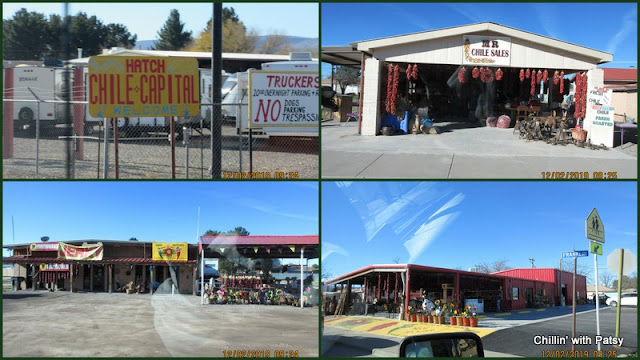 Bill and I have driven through often but other than on our way through stopping for fuel or lunch 2 weeks ago, we haven’t done the tourist thing. We turned the corner and pulled over on Main St. (NM-26) Jo-Anne was as excited as I was to be able to go into a couple of their shops. I’ve never seen so many chilis in one place. This was a fun stop and Bill and I got a great idea for something we’re doing back home. I picked up a Christmas ornament for our tree and Bill found a hanging chime.

Somewhere along the way, we stopped for fuel, I guess it was at Deming. How nice to have 2 pumps out front marked specifically RV Pumps. We’ve never seen that before. We weren’t that low but knew we needed it before our destination.

Getting close to Benson, we pulled off at the beautiful Rest Area (the one with the naturally stacked rocks). I told Jo-Anne not to sneeze as we left it as it might jiggle those rocks. They are amazing! We always wonder how they stay up there. 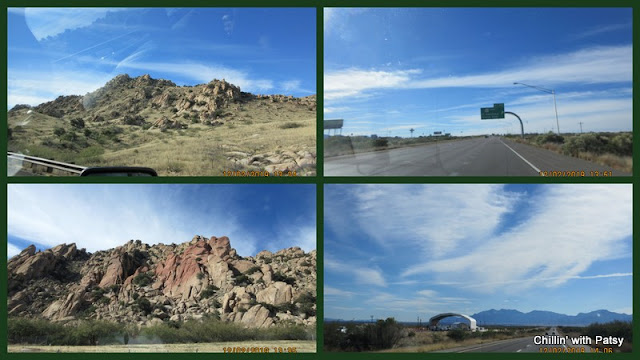 That stop was at 1:30 and 10 minutes later we were back on the road with only 35 minutes to go. We all managed to survive through the lunch hour with our bars, fruit and nuts. Supper might be early though.

It wasn’t far from there to get to the park and soon we were turning right onto Hwy. 82 and left into Quail Ridge RV & Mobile Home Resort. Bill and I went in to check in with the gals in the office and Jo-Anne came to check in Big Red as well.

The good news is that although we are in different rows, they are right behind (or in front of, depending how you look at it) us so very close for connecting while here. We do plan on a few excursions together in and around the area, we just need to figure out which days work best for which locations. We’ll chat in the morning about that. We were both all set up by 2:30 or 3 and we were lucky again to get enough of a satellite connection for many channels.

Bob, unfortunately, with his dish on the roof, has not had luck since we crossed into the U.S. There seems to be an issue with his dish because, we can only assume, of a new upgrade in September after they’d purchased this system. I’m probably not describing it properly but bottom line is that they have borrowed our dvd binder and are watching a lot of movies right now. After things were set up, Bill and I had a bit of cheese, I had celery and a handful of pork rinds.

We sat outside for a bit until around 4:30 Jo-Anne and Bob were taking Higgins for a walk around the park so we joined them. The air was cooling down from the lovely 66F we had in the full sun upon arrival. We can see the ‘blimp’ over Sierra Vista off in the distance, actually seemingly hovering over Big Red. There have been a few A-10 jets (I think that is what Bill called them) flying over too so this could be an entertaining ‘flight’ path too.

Our friends, Deb and DJ are still here in the park as permanent residents. We met the Grays’ in 2016 and then connected again in 2017 on our return. We will be looking them up one evening for a quick visit before moving on this Sunday. They are a younger couple, still in the work force so not home during the daytime hours. When we returned from our walk, I warmed up the chili I actually remembered to take out of the freezer this morning. We had some toast, in our new toaster, on the side and some creamed Jell-o for dessert. We’d forgotten to turn the hot water heater on so dishes had to wait for a bit.

In the meantime, I wrote on my post and updated my record book for all of our purchases. I do it month by month and hadn’t written up anything beyond November. How slack of me! With that done, I turned The Voice on downstairs and Bill moved upstairs to the other tv. We don’t see each other much in the evenings during Hallmark movie time but it is only a short period of time and we are both content with that.

This has been a good driving day and we arrived safely mid-afternoon with an extra 10 degrees added to our daytime high. This is a nice membership park that is also open to the public. We are all staying for a very decent rate of $13/night. That includes an electricity surcharge.

We won’t be in the park too much with all of our goings on but it will be quite comfortable here. We are anticipating more friends arriving on Wednesday but that is their story.

Thank you for stopping by

Posted by Patsy Irene (Chillin' with Patsy) at 8:59 PM