Tuesday Dec. 19th and it is our last day here at Lake Havasu City at Rose and George’s wonderful homestead. It was brisk at 7C/45F when I got up at 7:30 so quickly decided no walk this early. I don’t have to, you can’t make me. I opened blinds and as I turned the Keurig on, Bill also got up with Clemson on his heels.
After tea, coffee and laptop-ping (had to be different!) I began to sort the dirty clothes. Today is laundry day. Interesting, I’ve always debated using the word laundry until after the clothes were clean. Thinking that they were just‘dirty clothes’ before that. Looking up the definition of LAUNDRY is totally weird, I know, but I did. It means both dirty and clean clothes. Huh! We don't have to say dirty laundry and clean laundry when just 'laundry' will suffice.

Bill loaded the truck and we drove over to our old laundromat on London Bridge Road right beside the Lake Havasu RV Resort. After putting the ‘laundry’ into 3 machines, Bill drove down to the back entrance of Walmart for milk and creamer. I don’t mind that he leaves me with this job in the daytime, with a sunny day especially. I always have my book with me and sit and read outside. At night is a different story. 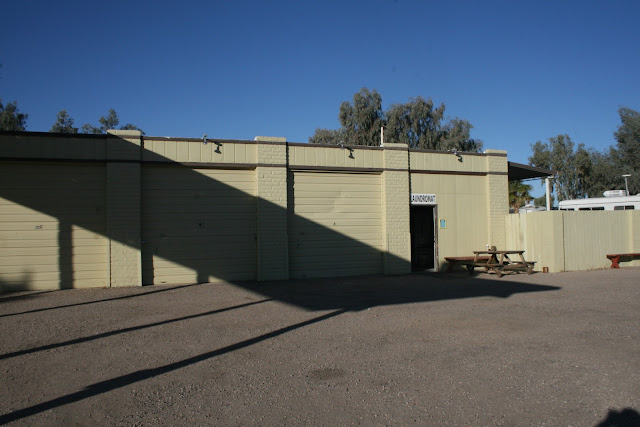 It was only 49F but gorgeous in the sunshine. I moved the ‘laundry’ from washers to dryers and when he returned we started chatting with a fellow from New York. (pronounced ‘New Yoock’) When the ‘laundry’ was dried I folded it and off we went, putting it away as soon as we got home. So, our ‘laundry’ is finished now and I’m done talking about it.

Okay there is one more thing I wanted to Google while I have free Wifi and while my mind is weird. Yesterday, I made a joke about Frosty and the Minions who were relieved of their air in the early morning hours. (aka murdered)

Well, I have noticed throughout my walks that other homeowners who have Yard Inflatables don’t treat their life size blowup dolls the same way and instead leave them full and fat and blowing in the wind all day and all night.

Okay, now back to my day. Before we returned home to put the clothes and dairy away, we drove across I-95, which is Mesquite Ave and turned right onto Lake Havasu Blvd. then left onto McCulloch. At S. Smoketree Dr. Bill found a parking spot and we went into Terri’s Avon store. I’m so envious that they can sell Avon in a store down here, back home I would have loved to have had that opportunity. Even to share it with another representative. 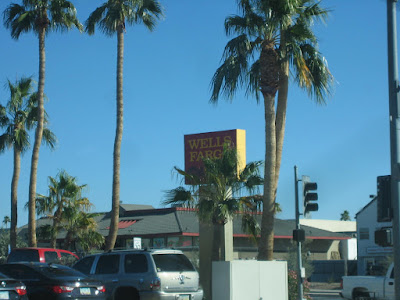 Anyway, she had the shower gel that Bill likes and for the price I was willing to pay. Being a representative myself gives me a bit of an advantage. We bought 2 and I made note to order more and have it delivered home for when we return. From there, we went back to the Suite. We were both ready for lunch so I fried an egg with mushrooms and wee sliced tomatoes and had that on a toasted bun with lettuce. Yummy! It sure hit the spot.

When dishes were cleaned up, Bill vacuumed the Suite so that is another job off the list of things to do before we leave. One more quick trip into town to top up the diesel for Black Beauty. We had points on our Fry’s (Smith’s) card so still trying to figure this point thing all out, we went to Smith’s gas bar.

The place was crazy, cars and trucks coming in every which way and as the fellow in front of us at the pump said some people have "no common sense!”. We had to agree.

We learned from this fill up that we got another .10/gal off because we have over 100 points saved. I think we understand now………..for Fry’s and Smith’s. Safeway points are another matter. LOL Back home, we recorded our purchases and we were pleased that my attempt this morning at Wells Fargo to withdraw cash, worked so I’m good to go again after making that phone call yesterday.

Bill and Clemson stretched out on the recliner and I did what I do best. I went out in shorts and a tee to the chair at the front corner of the house with my camera and my book. Well, actually I took a walk first so I could capture one more deflated yard inflatable. Lorne from A Place Called Away has almost inspired me to write a poem about them. Don’t hold your breath!

It was a great walk, and now that we’re almost ready to leave here I have figured out the best walk of all. I walk Kibbey to Barite to Griffin to Palo Verde Blvd, turn towards the lake (west) down the grade to Arroyo to Barite and back to Kibbey. No real hills and a great 30-minute walk. On the way back, I had a nice text from our buddies, Pat and Rob, back home. They were just thinking about us and wanted to say hi. That puts a huge smile on our faces and like the Grinch, our hearts swell a bit more.

When I returned, Clem was looking out the door and Bill had vacated. Hmmm. Now I wonder where he could be? It didn’t take long to figure out that he followed the noise of the bull dozer next door. I had already presumed (assumed?) that the neighbor was going to put a pool in so I’m happy Bill was checking it out for me! I heard his voice at one point so brought Clemson outside with me and we sat and waited.

Sure enough, that is where he was and that is what they are doing. Somehow, my sweet hubby managed to squirrel us an invitation to enjoy the pool when we return next winter! Awesome! Bill began putting things away, things we didn’t need tonight. Our blue pulse Christmas light and our propane tank. Before going inside Bill said “Did you want to go for one more atv ride?” Magic words! Yes, I do, my dear.

We hopped on as we were and took a spin down the familiar streets in the area for about 15 minutes and then back home again. It feels kind of sad that it will be our ‘last’ ride. But, hey! We’ve had fun and will again, I’m sure. We put the key in the secret spot, folded the patio mat and tucked it away. Inside, we turned NCIS on until it was time for supper. I, of course, sat here and plugged away at my post.

Bill poured himself a rum and coke and I made myself a Caesar. I had just texted Pat and Rob that it isn’t really Happy Hour when you are by yourself but we’re doing our best to enjoy it all the same. 😊 😊 Supper tonight was going to be simple so I don’t need to prepare much at all. The temperature got up to 68F today and it was almost perfect. A few degrees warmer and it could stay like that for the rest of the season.


Dinner turned out great, of course it did. We had leftover meatloaf, a salad and the traditional simple 80’s meal of mac and cheese. 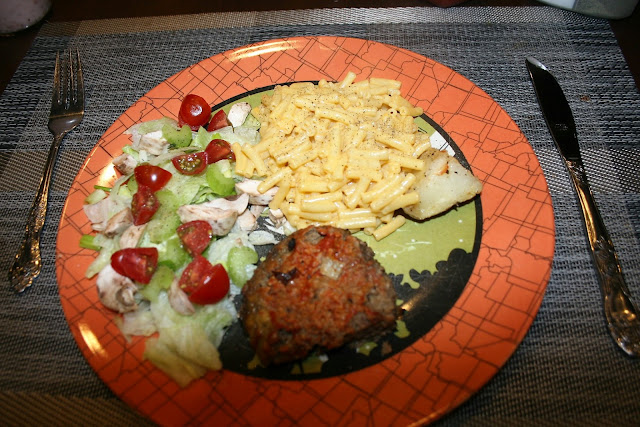 It has been a very long time since we’ve opened a box of Kraft dinner and for some reason it just went along with our leftovers tonight. We cleaned up dishes and Bill found a Josh Groban – Home for the Holidays special. 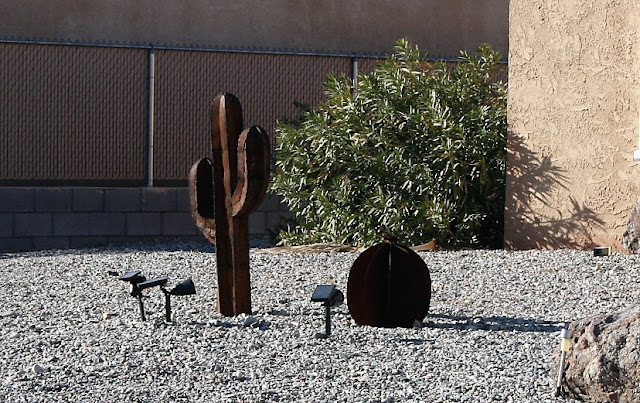 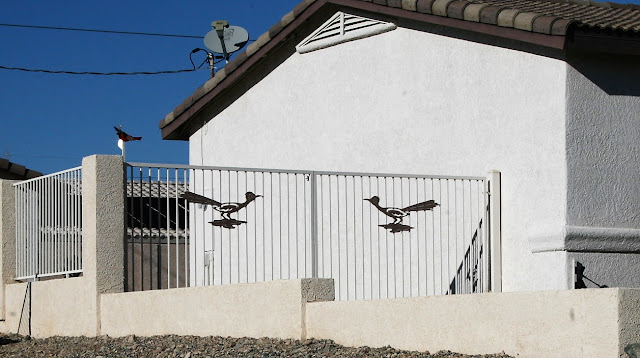 We enjoyed that for an hour and got teary-eyed a few times with the adoption stories he shared. This is the 19th year of this special. Bill and I remember Josh’s first appearance on this show 16 years ago when he won our hearts with his voice and personality. We then caught the 2nd hour of The Voice Finale. I won’t reveal who the winner is in case some watchers have recorded it so don’t give it away in your comments either! 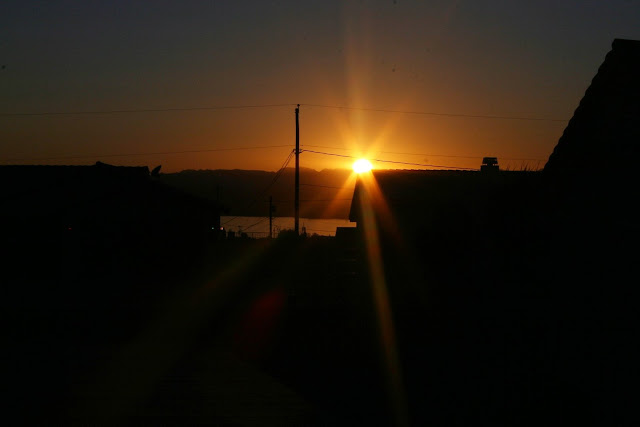 It has been a great day here for our last one at the Lake. I hope yours has been a good one too. I appreciate you stopping in today. Feel free to leave a comment if you wish.
Posted by Patsy Irene (Chillin' with Patsy) at 8:56 PM