On Wednesday, June 6th we had a few little jobs to take care of. We woke up around 7 and I made my tea in a ‘to-go’ mug. With my pictures all downloaded from the last two days, we loaded the sorted dirty clothes into Ptooties. Every time we get into her these days, we realize she needs a good inside cleaning so that is on the agenda for later today.

We drove to Tim Horton’s where Bill ran in and grabbed a couple of coffees and a couple of ooey-gooey frosted cinnamon rolls. Nope, not for me. I dropped him off at Rob’s where there was going to be some serious but minor welding to be done. They enjoyed their goodies and we supported Camp Day all in one fell swoop. At the laundromat, I was the only one there so had my choice of washers. We usually take the first 3 coming in the door but the 3rd one had traces of cat hair and odor so I skipped one. Connie, the owner’s daughter hadn’t been in yet to clean them.

One other fellow joined me as I was half way through the wash and utilized a couple further down from me. I clicked onto our hot spot and finished my post for the last two days. Not much going on so a 2-day posting was fitting. After semi-folding the clean clothes, I drove to Rob and Pat’s to pick Bill up. We chatted briefly about last night’s host’s home and phone systems etc.

The brackets that Rob welded look great and Bill will drill holes in the Suite’s underbelly and paint them for installation. This was a great idea we ‘borrowed’ from a fellow with a Mobile Suite at Quail Ridge in Huachuca City, Az. Sometimes, it just takes some looking to find things that will answer a question and make life easier. Especially when it comes to storing items, we are open to suggestions.

Yesterday, I neglected to tell you that we are the proud grandparents of 5 goslings. Yes, we just discovered in the last few days that Fred and Ethel had babies after all! I’m so excited and they must be too because they brought them up to show the babies where we lived before turning around and taking them down the hill again. Of course, our cameras were snapping away. So cute!!

After hanging the clothes at home and relishing in the clouds opening up for me, we came inside and I made up another toasted western-type sandwich on a sub bun. I enjoyed it so much the other day and although not a good habit, with the bread, the second time was even better because I added cut up green olives to mine. Yummy! We cleaned up dishes and Bill went back out to work on the brackets. I finished my second tea and finally got the Suite’s floors cleaned before I, too, headed outside to clean Ptooties. 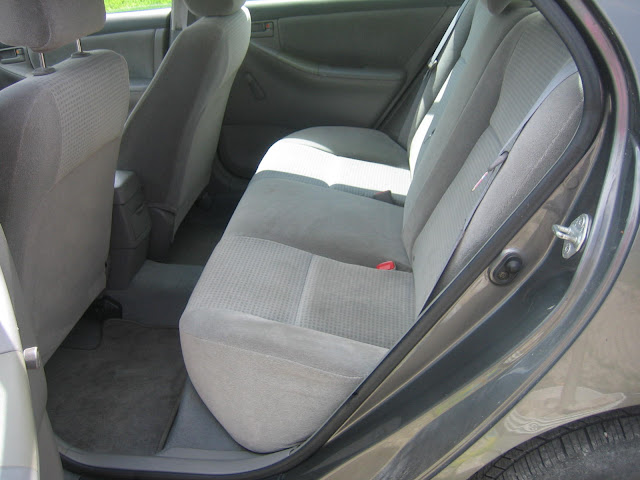 Our vehicle is never cluttered, it just isn’t something we’ve ever done. Our vehicles do, however, get dusty and dirty with everyday use. If a coffee gets spilled, it doesn’t always get the best wiping or if we drop crumbs from something we’re eating, it might be a while before we vacuum it out. The floors get the dirtiest with sand from the south or stones from home. Today, the Toyota got a good wipe down with Spic and Span and vacuumed everywhere.

When I finished that, it was warming up nicely and the sun was still making appearances. I decided to spread the Black Beauty mulch that I bought a few days ago and covered the flower garden the best I could. Pretty soon I shouldn’t have to lay it down, the ground is almost covered with my plants. That will be nice too even though the black accent looks attractive. I needed more so when Bill went into Durham to get screws for his project, I went along and bought 2 more.

The winds were sporadic and wonderful so it was a day to do this outside stuff for sure. I kept glorifying in the beautiful day. At one point today, when I was cleaning Ptooties, I thought I heard music but none of the neighbours were even home. As I finished up and walked by the bunky, I realized it was Dad’s (ours now) train clock going off. Chug chug a lug. I figured that it was running continually because the little train was stuck. Our friends said that Dad must have been thinking of us. 😊

Laying one more bag of mulch over the garden areas, I left the last one in the wheelbarrow until tomorrow or Friday. My back was feeling the awkward position I had been using so called it quits. I cut some cheddar cheese and had a few almonds, walnuts and peanuts for a snack. Bill just had some cheese, he was full in the throes of his job. I do believe that he will be writing a post about it so all I’ll say is that it looks great!

While Bill was finishing up, I brought my clothes in off the line and folded them. They smell so nice drying that way. Inside after 5 we were both pretty tired but felt it was an accomplished day. For supper, it was simple with barbecued pork chops. My potatoes are gone and so is the lettuce so I’m glad I’d picked up a pre-packaged Caesar salad. That would go down just dandy. We have a treat of Chapman’s dark chocolate ice cream bars for dessert. Oooh!

At 6 we lit the Weber and began grilling. The sky has remained a lovely blue for quite a while now and the temperature is sitting at 65F/18C. Just wonderful! When I lit the barbecue for grilling, I also lit the firepit and burned a stash of papers. Some things we won't recycle. We’ve had a good day and spent the rest of our evening either outside or inside, whatever struck our mood. I hope you had a similar day.

Thank you for taking the time to read my post. I love hearing from you if you wish to comment.

Posted by Patsy Irene (Chillin' with Patsy) at 6:32 PM