It was 6:30 when Clemson first woke up and hopped off the bed on Friday, June 29th. With every window, minus two behind the sofa, in the Suite open all night, we slept like logs. For the first time in a long time, Clem did not sleep next to me but instead spread out across Bill’s side of the bed. Even with his haircut, he feels the heat too. I won’t complain about it though, never, it is the summer weather I love. 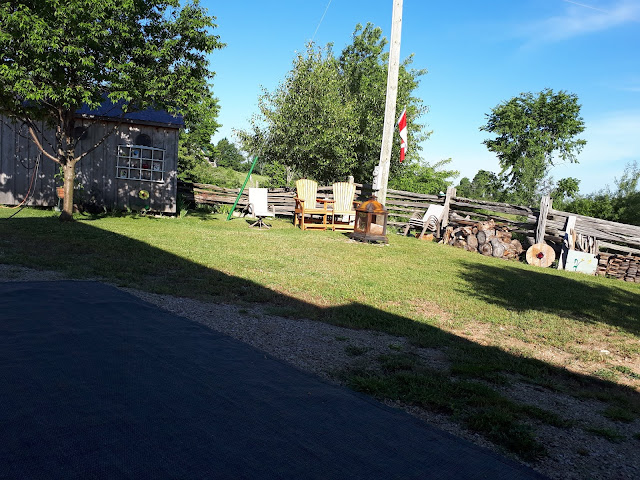 The humidity does get pretty unbearable at times but my system seems to accept it like a pro. I know how to slow down and take it easy, especially now in retirement. This in no way negates the empathy felt for those who have to work in it on a daily basis with no relief. I hope their employers are considerate and flexible at these times.

I had a goal in mind this morning as soon as I finished my tea. After chatting with Bill in the big city, I got dressed and took a bottle of water outside with my cowboy hat. It was already 63F/17C and I had grass to cut. The grass itself isn’t that long but those long spindly weeds, you all probably know what I’m talking about, have shot up 12” since the last cutting! I knew that I would work in stages so began with our ‘front lawn’.
45 minutes later, I took a break in the shade and I took the hat and glasses off. After a cool down of about 20 minutes I cut the hill beside the corral. That was a little more strenuous because it is inclined (it’s a hill!) so 25 minutes later, it was done. Phew! The mower battery had a full charge when I started so it was still going strong. Another 15 minutes of rest and then the push to finish by the outhouse and sitting area. The battery died about the same time that I did. 😊

When cooled down for the last time, the mower went back by the shed, the battery got plugged in and I put some bird seed in the bird bath. Soon enough, Chippy found it and took it as a special gift as he hopped up and down a few times filling his cheeks. It was a nice opportunity, sitting in the shade, to use my telephoto lens and snap pictures of him and the birds around the area.

Inside, Clemson sleeps in his bed on the couch. I don’t like him to be outside when I am cutting, it is too hard to keep an eye on him at the same time. He wouldn’t be happy for very long out there anyway and that would be an interruption I don’t need. I communicated with Donna, my son, Patrick and Bill for a bit and then came inside for a glass of my smoothie. At noon, I made myself an egg sandwich using those 'heels' Shirley and I love.

As I sit here, catching up on my morning, I’m thinking of the busy month ahead. I love plans and preparations for things as much as I love the heat. That is what summer is all about for me. We have a lot of things going on and one of the most important ones is that my little brother, Michael, and his wife, Crystal are bringing their travel trailer to Ontario for a holiday! Yay! It will be so nice for all of my family to get some ‘chill’ time with them.

My Sisterfest is July 9 – 12th. Should be another good time together. A couple of new things on the agenda this year! We are also having a few of our rv’er friends bring their units here to the Ridge for a week or so near the end of the month so lots of fun times on the horizon. I’m sure that all means that the month will zip by and before we know it, we will be getting serious about our fall plans to head south. So far, we haven’t discussed too much other than a possible departure date.

I decided, since it was now too muggy to work outside on my fire starters (too much trouble to move everything into the shade) so pulled my sewing machine out and re-created a summer top. I actually turned it into a tankini. It was a semi-sloppy job but it is very comfortable and works very well. To test it out, I was invited over to the Acreage to have a swim with Donna. You don’t have to ask me twice! I closed windows, plugged us in to power, turned the inverter off and the a/c on before I left. I had to take a few back-up steps but the result was the same.

Clemson and I loaded into Black Beauty with a pool noodle, my hat, water, phone, towel, water shoes and my purse just after 2:30. Donna and Gerry were sitting in the shade facing the pond. Many would think the pond is dirty, and yes without a doubt, it is brown and the bottom is gushy. We wear our water shoes and float on noodles or in boats or rafts. We don’t touch the bottom. But you know what? On a 90F day after working, cutting grass or whatever, it was sure refreshing! 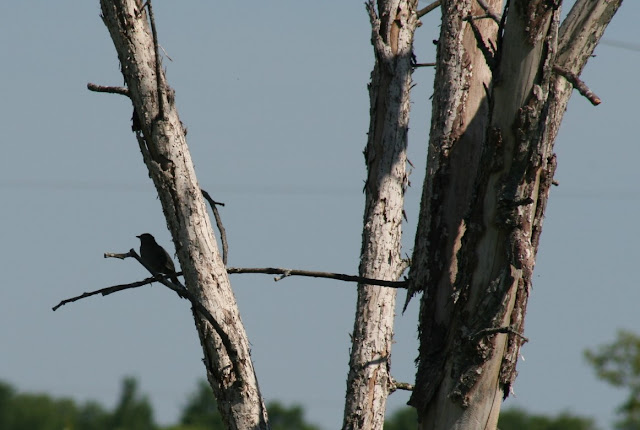 Gerry kept an eye on Clemson for me and Clemson kept an eye on me which I found quite endearing. When we got out of the water, we sat in the sun for a while to dry off. Bill texted at 3:30 to let me know he was leaving London for home so I knew what time to expect him. After a nice visit of an hour and a half, we returned home. Bill pulled in the driveway 45 minutes later, right on time! We unloaded Ptooties of the groceries and I found cubbies for everything. We are fully stocked again!

The wind is quite brisk but knowing tomorrow will be hot and humid again, we are going to leave the windows closed and the air conditioning running. I have thawed a couple of Italian sausages for supper and will warm up the last bit of potatoes for me. That dish has certainly sustained us all week! Bill will have his sausage on a bun with sweet and sour sauce and onion.


We were all cleaned up by 7:50 which is later than usual but considering Bill didn’t walk in the door until 5:50, we did pretty good. Supper was good. The rest of the evening was quiet and we settled in for the night. Too windy for the awnings and too windy for an outside fire. I hope you’ve had a great day like we have!

Thanks for stopping by. Your comments are welcome!