On Monday, June 11th, we were up at 6:30 to greet the beautiful sunny day. It was already 57F/14C and no wind to speak of at the moment. Before making our tea and coffee, we slipped out for a morning walk. Clemson had already been up at 4:45 so he just jumped up onto the couch. Not interested. We walked the park perimeter looking for an rv that Bill might need to be taking out on Wednesday for CanAm.

We saw Suzie briefly and took a peek into the cabin they are staying in temporarily. Back home, we made our hot brew and caught up on blog posts. Bill discovered that he wasn’t bringing a new or taking out an old trailer HERE after all, they had the wrong park. So, we’ll stop looking. I made up toasted western sandwiches before we drove into London to the doctor. Bill wanted to discuss the results from his last stress tests.

We made good time and found a parking spot in their crammed lot fairly easily. I went in with him and we both left with some comforting and not so comforting information about Bill’s health/diet and family history. Some changes need to be made and it is up to Bill. I’ll help as much as I can, (stop baking!) but we aren’t at a serious stage at this point either. We have time to set things straight.

On the way back to camp, we stopped at Costco so Bill could check out their pants and shirts. Some of his are getting pretty old for working at CanAm and others are uncomfortable. Bill doesn’t shop much for a wardrobe so I was gung ho for him to buy what he needed. They have nice clothing and usually some pretty awesome deals. Somewhere, I dropped or set my phone down (which is usually attached to my hip in one form or another).

It was as we were leaving the London vicinity that we realized it wasn’t in the truck. Back we went with our hearts pumping and dread at a high point. Luckily, it was found and turned in so after describing it and Bill calling it, it was back in my hands. My shorts or top today do not have pockets, so the phone wasn’t in it’s usual position. No excuse, it was scary for awhile hoping it got into the right hands and it did.

When we came back home, it was no surprise to see our pooch on the other side of Rob and Pat’s Silverback. No worries for him, he has more than one set of parents! Pat said he could see us under the trailer so Rob brought him over. We went inside for a bite to eat and because Bill had a headache, he layed down and I came outside. Our site isn’t in complete sun but it is nice at the picnic table. Too bad there are little teeny black bugs around. They fly right in your face so you need to keep your mouth closed!

Rob was doing the same thing as Bill and Clemson so Pat brought her chair over to join me. Soon enough it was time for Happy Hour. I didn’t get a picture so I’ve used the one George took. I think some people were missing but I may have got them in the picture I took later. There was some sun sitting, some shade sitting but we all enjoyed the easy conversation no matter where we chair hopped to, using a saying of Bob’s. (Bob’s Eyes)

The ‘party’ broke up around 5:30 when Monique, Emile, Rob and Pat left for home. It was time to start supper.

We had bacon cheeseburgers but after a nice lunch, my tummy wasn't ready to eat. I had mine in lettuce and because I didn't feel hungry, it didn’t turn my crank today. 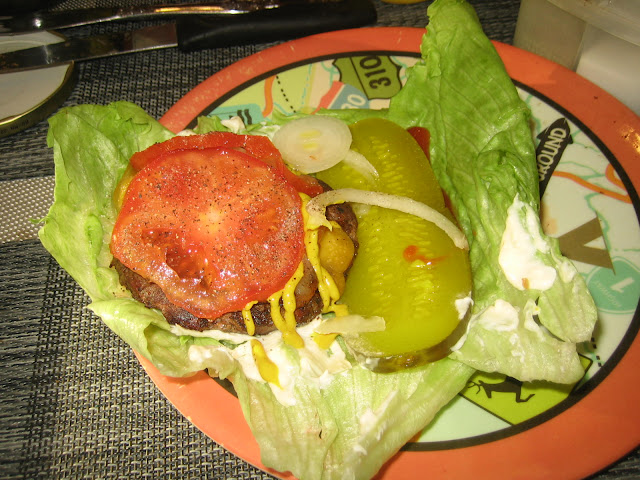 After loading the days dishes in the dishwasher, we took a walk around the park. We needed to walk supper off. Clemson remained in charge at the Suite which made for a more pleasant steady walk for Bill and I.

We chatted with George and Suzie at their cabin for a bit as we made our rounds and then Rob and Pat back at their site. Bill has a couple of work days but the nice thing is that he’ll be home in the evenings. I hope to get some walks, swimming, hot tubbing and finish a book in his absence. This has been a pretty nice day. The weather has been around mid to high 70’sF/20’sC. With the wind, sitting in the sun was beautiful.

I hope your day was a good one too. Thank you for reading. Your comments are always welcome and appreciated.