Before we went to bed last night, it was still a warm 72F/22C outside and not dropping much overnight. We decided to close windows, since there was no breeze anyway, and turn the a/c on in the main living area. It came on immediately set at 20C but since I dropped off within 20 minutes, I didn’t hear it shut off a short time later. Bill heard it click off and doesn’t think it came on all night. That’s nice. 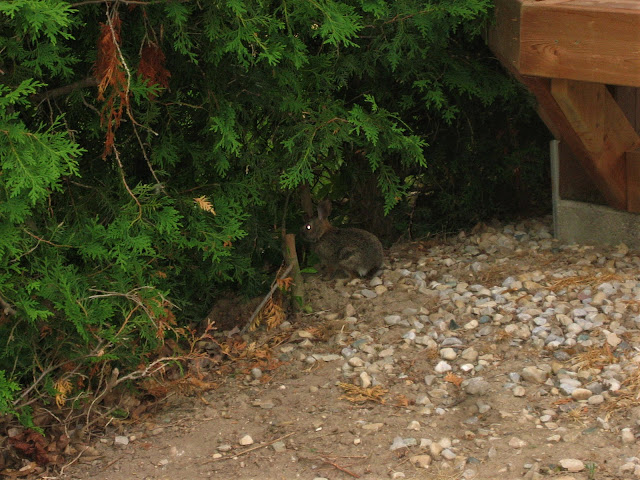 I slept well and when we arose on Wednesday, June 13th at 6:30, I was ready to get up. After doing the ritualistic stretches, it was closer to 7 by the time I got downstairs. Bill hopped in the shower and I went for a short walk so we could have our brew together.

This is his second and last CanAm work day this week so he will have 4 ‘free’ days to relax before we leave the park. He pulled out after some breakfast around 7:45.

Soon after, while finishing my tea, Rob came over to let me know they were heading out for the best part of the day as well. I washed and brushed my teeth before ‘suiting up’ (water, runners, phone, sunglasses, camera) for a walk. I thought I would head north on Rock Glen Road but was curious enough to cross instead to the conservation area. I didn’t think I could get in the gates without paying the requisite $4 but realized I could, at least before gates opened.

So, that is where I headed. Good thing, it was much nicer walking in the shade of the trees along the trails and down the wooden stairs than in the full sun on the road. The air is already humid so we don’t doubt the forecast of rain coming. 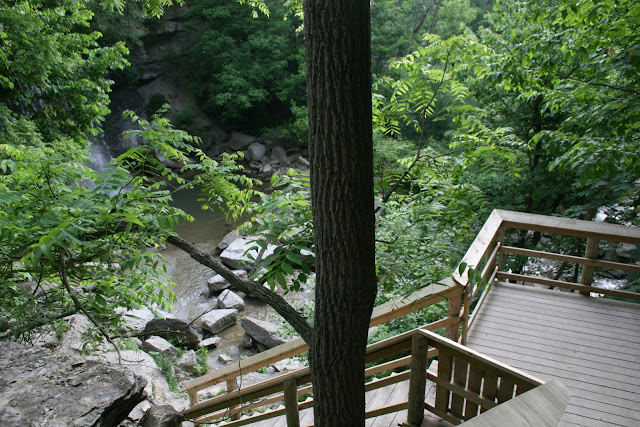 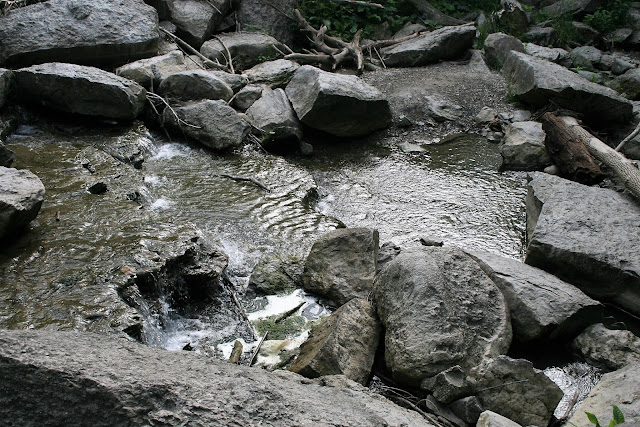 The sun and clouds will probably play tag for the most part. I got some nice pictures of the area and came back to the Suite. Clem never even realized I was gone. *sigh* oh to be missed. 😊

I sat outside with my water in the nice breeze and started this post. I downloaded my pictures and was pleased that they turned out pretty good. I’m getting ground beef out of the freezer so I can make meat loaf for supper. Never sure what the weather will be like on overcast days like this, I like to be prepared for an indoor meal. Also, not knowing for sure what time Bill will make it home, plays a big part in that decision.


I noticed that they were cutting grass in the area so moved inside so he would feel comfortable doing around our site. By the time I was settled indoors and made contact with Gerry about my laptop. I hopped in the shower and now see that the sky is blue once more. A huge game of tag going on up there. It is another gorgeous day!

I wasn’t having major issues with my Lenovo Think Pad but a few times lately I have been receiving pop up notices saying that my E:drive didn’t have much space left. Wha? Gerry, our computer tekky, offered to have a look at it. It was a simple fix for him because nothing was showing up in my E:folder but when something comes up with a warning “Formatting will delete all the files in this folder”, a rookie like me takes a step back.


Gerry and Tucker showed up around 10:30 and had taken care of the issue and answered a couple of other questions in no time. Thanks Gerry! With an offer to practice darts this afternoon, I jumped on it. If we play tomorrow night at the clubhouse, I’ll need to see if I can still hit the board. I used to be ‘o-k-a-y’ way back in the late 80’s when I played in the Legion leagues.

At 11:30 I was ready for something to eat. Let’s try a bowl of this yummy looking soup. I just hope I’m not disappointed! As is normal for most soups I make or eat for that matter, I added my own source of good fat and plopped a teaspoon of butter in the bowl. That with a bit more pepper and it was pretty good! I cleaned up the dishes and sat outside in the shade of the maple tree. It is 79F/26C already at noon hour.

At 1 o’clock I met Gerry up at the clubhouse to practice throwing darts. He gave me some tips I’d forgotten about and he won best 2 out of 3. Not bad unless he was just toying with me! Bill and I said we’d join the ‘gang’ at darts tomorrow night. It should be fun. Just before our last game ended, the winds came up and we got a bit of a downpour. It had stopped when we walked back to our trailers but it was still really humid. Inside, I closed the windows and put the a/c on to cool the Suite down from 83F/28C.

As I was sitting outside earlier, I decided that I wasn’t enjoying the Michael Connelly book as much as I’d hoped. They weren’t typical short stories, more of a documentation of events, so I closed it and decided I’m not wasting my time. When I was up at the clubhouse I found another James Patterson book that we haven’t read yet. The 4th of July and it is with Lindsay Boxer and the Women’s club. This should get me back on track.
As I was sitting on my recliner, riding the ‘storm’ out (which didn’t amount to much here) I had to close my eyes for a minute. Naturally, that is when my sweetie texted to tell me at 2:40 that he was on his way home. Woohoo! That is great! I mixed up the recipe for the Easy Meatloaf and had it all prepared to pop in the oven at 4:30.


The wind was wild and when Bill pulled in, he followed Rob and Pat through the gate. We were chit chatting and decided to bring our chairs together for Happy Hour. It was spitting rain briefly up at the cabin, so George and Suzie joined us. It was pleasant even though Paul had to chase Suzie’s hat and reset Judy’s chair a couple of times. We enjoyed ourselves on the warm day.


As the ‘party’ broke up, Rob and Pat stayed put until our supper was ready around 5:45. We chatted about future sites we could get together at another time. Yes, we would come back to camp with them again, maybe in September. Inside, I made up a salad to go along with our meatloaf. It was tasty as usual and filling and dare I say……..good for us! 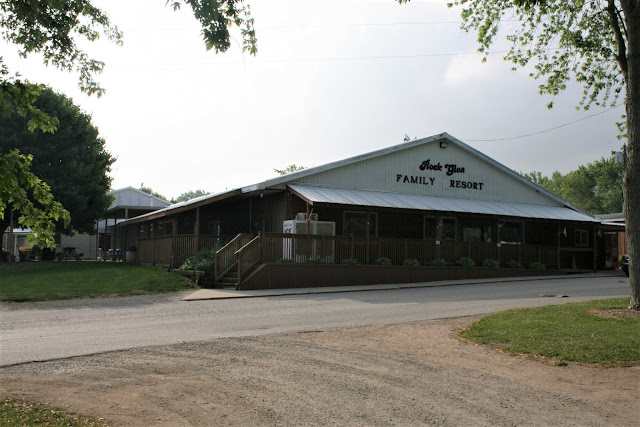 We cleaned up dishes and Clemson and Bill claimed the recliners in front of the tv. I was feeling a twinge in my back from something I did earlier, no, not from darts, so I refrained from walking tonight. Maybe it would have helped. The sky is blue and the wind has died down from the 45 mph gusts so we turned the a/c off and opened windows once more.  This should be a good night for sleeping.

The rest of the evening passed quietly. This has been a good day for both of us. Everything at CanAm today went like clockwork and I’m happy that Bill is done work for another week. Yay! We will make the best of our remaining 4 days here at Rock Glen. Have you had a good day?

Thanks for checking in. I love reading your comments.

Posted by Patsy Irene (Chillin' with Patsy) at 6:15 PM