Clemson and I were awake and out of bed at 7:20 am on Friday, June 1st. New month and looking at the gray sky, I knew it was to be just another odd day of not knowing what to expect. I slept well with all windows open and have no clue if the sky opened with rain or not overnight. There seemed to be dampness on things like the carpeted steps, Clemson’s stool and the grass but no other indication of rainfall.

I made my tea after letting the little bum out and skipped making the bed. Bill had asked a few days ago if we had something other than the duvet and cover for our bed. With these warm nights, we roll it down and just use the sheet as a covering. It gets to be a bit of a pain in the you know what. The sheet has been enough. If there was something a little lighter weight (I think it is the cover more than the duvet) we would be fine if the air cooled down and we wouldn’t have to pull up an extra layer.

Anyway, after my tea, I went up to get dressed and decided to find something different. I have a favourite white chenille bedspread that was in the bunky just covering the futon/couch. We had it at our London house. That might work nicely so I removed the duvet, tucked it under the bed and put the cover in the dirty laundry bag. It won’t go back on, I don’t like it. I’m not keen on the white bedspread on our bed only because Mr. 4 Paws will have it stained in no time, but I do like the look as well as the weight of it.


I don’t know what time it was that the clouds began shifting and I could see a patch of blue sky periodically. Bill called from London early on and I caught up on what his job was today and from that I can determine a possible time for his return home.

After work, he visits Costco for our groceries and today in particular he was stopping at Marilynne’s in Stratford to go through some of Dad’s things. So, being in touch throughout the day, I knew it would be good to visit Mom today before her lunch. I left home earlier than normal with the hope that I would be able to slip down the hall and see Aunt Mary first. If Mom is out walking and sees me, I can’t do that easily.

As it turned out, Aunt Mary was downstairs in the lobby watching the ladies outside plant geraniums along the front of Rockwood. She greeted me with her left hand and a nice smile, gesturing that she was pleased to see me. I sat in the chair beside her and chit-chatted away about anything I could think of. It is a one-sided conversation but at least I knew she understood what I was talking about. It was quite warm down there so she indicated she wanted her sweater off. We got it off and she ‘pooh-poohed’ my apologies of some awkwardness on my part. 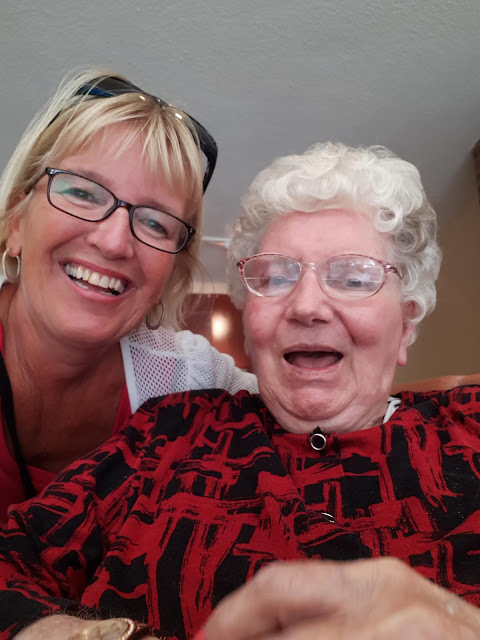 After about 15 minutes, I captured us in a few selfies and said goodbye before going up to find Mom. She wasn’t in her room but out galivanting the halls. I love it when she is out and about, it means she is feeling comfortable. Happy to see me her first words as usual were “What are you doing here?” as she wrapped me in a big hug. Her hands felt chilly so I invited her once more to go outside in the warmth. She readily accepted and I loaned her my sunglasses again. I’m going to pick her up a pair next time I’m out.
We sat outside in a couple of chairs on the front lawn and while sitting there, the sun appeared and disappeared a good number of times. Her sweater remained on today. We watched a baby black bird in the grass who surely couldn’t fly yet but Momma soon made an appearance encouraging him/her to a safer area where she dug for food with her beak and transferred it to the hungry squawking mouth. I recorded the actions on my phone and will show Mom another time to remind her. She got quite a kick out of watching them.

Before going inside for lunch, we set my phone camera up and snapped the standard 3 selfies. I left her at the table, with many kisses passed between us, waving goodbye all the way out the door. I decided to drive to FS Co-op to check out their annuals. I needed to get some colour for around the Ridge and fill my pots.

I don’t imagine the prices vary much from nursery to nursery so didn’t debate the cost. I chose what I wanted with the lady who worked there and headed home. I stopped at a resident's Perennial sale and chose a pot of Hens and Chickens too. They will be a nice addition to my garden.

I warmed up the 2 leftover pancakes I’d made from yesterday and enjoyed them as much as the first two. Of course, I added butter and local maple syrup, something that was a treat at home as children. Even though it is sweet, it is real and not that made up Aunt Jemima stuff that we lathered our flapjacks with for years. Clemson and I were outside a lot of the day but I had to put him inside while I got my shovel, trowel, pots and wheelbarrow rounded up. I didn’t want him wandering off on me. 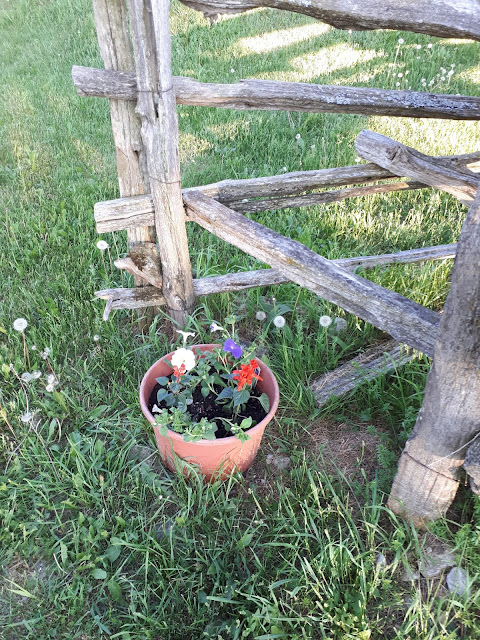 I went up the hill and crawled through the fence behind my garden into the farmer’s field. Well, at the edge actually and using a pail, dug up enough earth to fill my pots. He isn’t going to miss it and he hadn’t planted yet anyway. If it makes any difference, I was very appreciative. Two of my tomato plants got moved from the smaller pots I’d used the other day and I filled the rest and the box Bill made me with the annuals. I bought petunias in red, white and deep purple and then some Salsa Salvia. At least I think that is what it is. 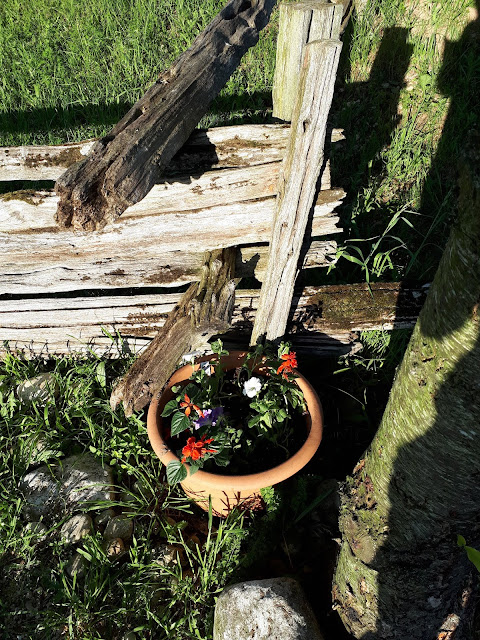 Everything looks good and I’m very pleased. The grass will wait until the morning so now I’m hoping it doesn’t rain first thing. The air is cooler tonight and the winds are still strong as you can see by the flag in my picture below. 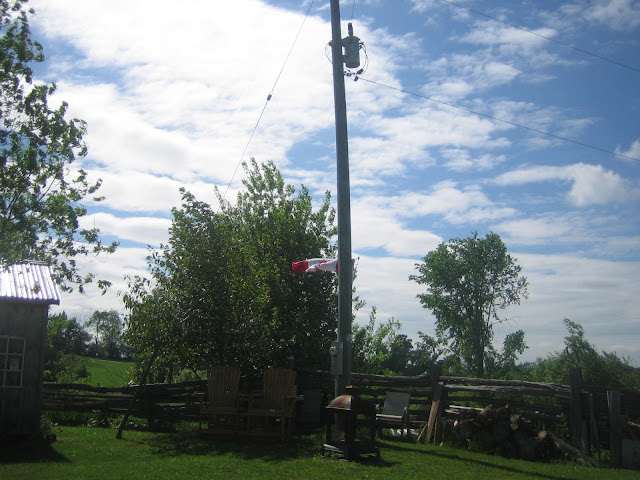 Bill made it home by 5:30 with a loaded car. We unloaded groceries into the Suite and most of what he obtained from Marilynne into the bunky for now. He can sort through it another day.


We had homemade fish and chips for supper, me forgetting that I had to do the fries in the electric frypan. Darn! Still messy and I’m not doing it again. Bill tried the funnel thing, Nancy, but we must be klutzes and wasted more than I wanted. After the dishes were cleaned up, I went for a walk down to the corner of North Line and Baptist Church Road. My Thinkpad has been acting up since I posted this morning and I’d hoped Bill would have an idea on what it might be.

He was as baffled as I was so I Googled the issue and got an immediate possible resolve. I wasn’t inside enough all day to do that earlier. Bill tried the suggestion and I believe it worked although he has his doubts, thinking it just all of a sudden started working again. Darn technical stuff, we so depend on it now. So, I’m forced to write the day’s events all at one time rather than my usual way of typing as I go.

It has been a good day and I’m happy to have my flowers planted now. If it doesn’t rain tonight or tomorrow, I’ll have to take my watering can up to veggie garden. The great news is that our carrots are popping above the ground! Yay! I hope you have enjoyed your day as much as I have mine. 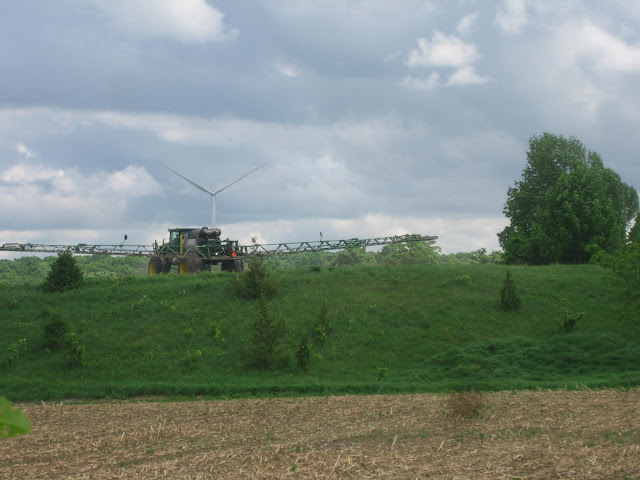 Thank you for taking a peek in what we’ve been up to. I love reading your comments if you wish to leave one.

Posted by Patsy Irene (Chillin' with Patsy) at 8:01 PM