It was around 6:30 on Saturday, June 9th when we found ourselves up and about. It wasn’t looking like too much sun was going to make an appearance today but at least the pleasant 55F/13C was encouraging. It was a nice night for sleeping too, double digits are always good for the overnight hours. We had our tea and coffee and talked about what we needed to accomplish today.

One thing I wanted to do before leaving here tomorrow was to spread the last bag of mulch. So, that finally got done! I think it looks so much better and should help to keep the weeds at bay.

Gerry needed to borrow Bill’s jigsaw as Mike was building a new rv step for them and once they left, we hopped into the Rav4 and drove to Hanover. A few groceries were needed from Walmart, some bread at Bread Depot and we stopped in Mark’s to check out their ‘storewide sale’. Bill found a pair of black jeans for a great price.


Back in Durham, the town was C-R-A-Z-Y!! The Durham Herb Fair was on, an auction sale, many garage sales (including the Aljoes’) and even a funeral. I missed getting a picture of the 1940’s hearse as it sat in the lot. The streets in the north end of Durham were jam packed for most of the day. We found a spot down Queen St. and walked to our friend’s yard sale with a 6 pack……of cinnamon buns. It was nice to see Trace who was home from the mine for a couple of weeks.

Bill and I left for home and tidied up a few more things, getting ready for tomorrow’s departure.  At 1 I picked Donna up, yay, my turn to take the new wheels out, and we hit a couple of garage sales. Pat handed me cash that she received for our inflatable boat. Yippee! We are so glad it sold and thankful to them for putting it out for us. We made $24 at their sale. :)

We found a few small things and then drove to Rockwood to see Mom. Today was Elvis day, Spencer a young impersonator from Durham was putting on a show for the residents. We all love Elvis, so when Cathy, my oldest sister, arrived we all sat with Mom in the auditorium. She was so proud to have 3 of her daughters with her. 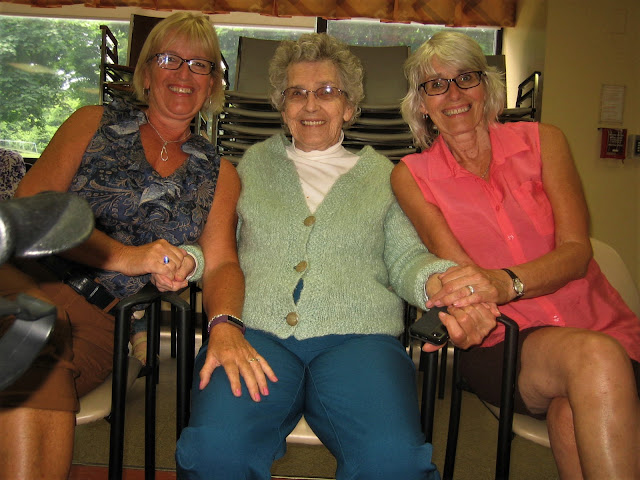 For an hour we listened and sang along to his renditions of many of the Elvis hip shaking classics, then he did some Ricky Nelson and even Johnny Cash. This young man was not more than 25 and was very good. He didn’t look exactly like the Memphis man nor did he talk like him but we enjoyed the performance very much.

The 3 of us walked out to the elevator where we met Rob and Pat in for a visit with Aunt Mary. Mom flirted with Rob, right in her element there! Lots of laughs.

We said goodbye to Cathy and I drove Donna home to the Acreage. Back at the Ridge, Bill had most things put away and the truck backed into position. It was when Bill asked what was for supper that changed the evening. Or should I say it was ‘the way’ Bill asked “what did I have in mind for supper?” that did it. He had an idea in his head and barbecuing steak wasn’t it. That idea was Riverside Fish and chips so we texted Donna and Gerry to see if they had plans.

We drove and picked them up giving them their first ride together in the Rav4. The food was good and I was so ready for it. After dropping them off again and checking out their new step, we returned home to our pooch. I felt kapooped again and just wanted to sit. I hadn’t really done much but it was a go-go-go day. I cleaned up the day’s dishes and put things away before securing the cupboards with the bungees. I remembered how to do it!

Before coming inside, I made 4 jaunts around the property and up to the garden with the watering can. I wanted to give my plants and veggies a good drink before we left. Bill found a program on PBS that we’ve probably seen before but this time recorded it. It is called The Highwayman Lives with Johnny Cash, Waylon Jennings, Kris Kristofferson and my all-time favourite, Willie Nelson. Every song is one we can sing along too so now today I have had rock, gospel and country filling my soul with music. 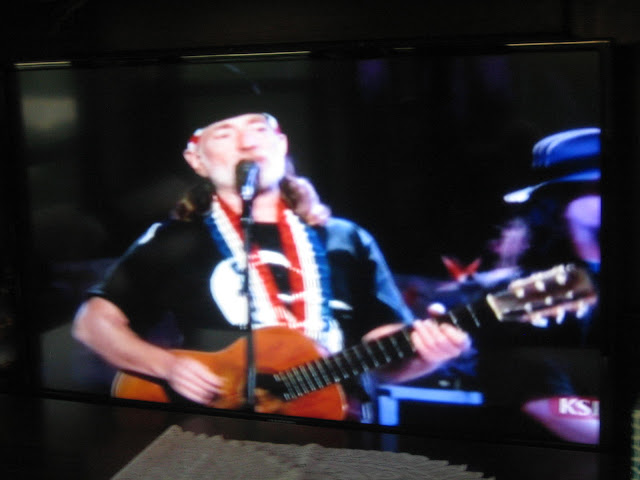 One thing I didn’t tell you yet. While I was gone today, Bill crawled up onto the roof. We had a robin family nestled in our bedroom a/c. We couldn’t take the babies with us or Mama would never find them. So, with gloves on he carefully lifted the air conditioner to move them out. The nest was mostly dismantled and the 3 babies were actually old enough to have their license to fly. With a nudge, each one took off from the rooftop. What a relief that was! Bill’s hands were pretty busy though so couldn’t get a picture. 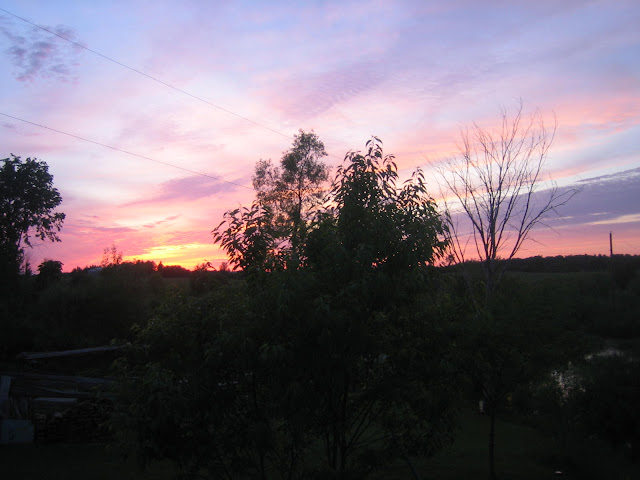 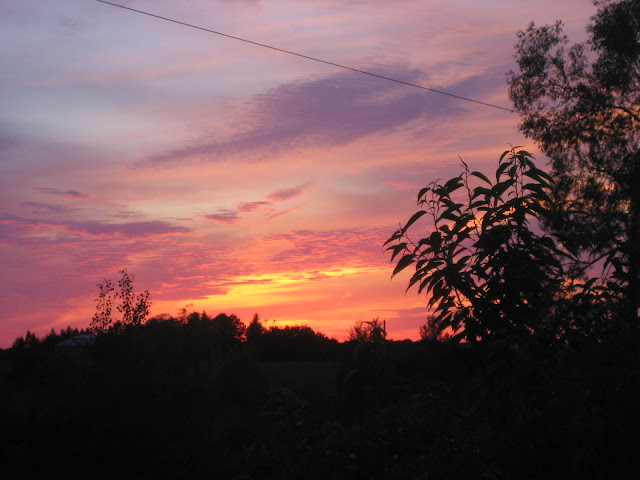 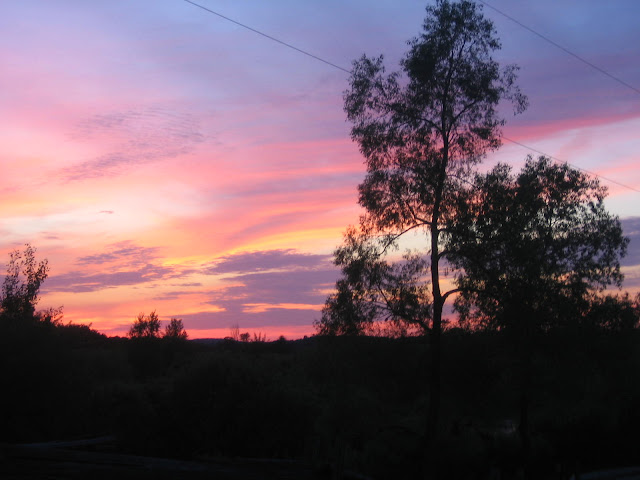 The sky put on a gorgeous display tonight before (or as) the sun was saying goodnight. I hope your day was just as wonderful! 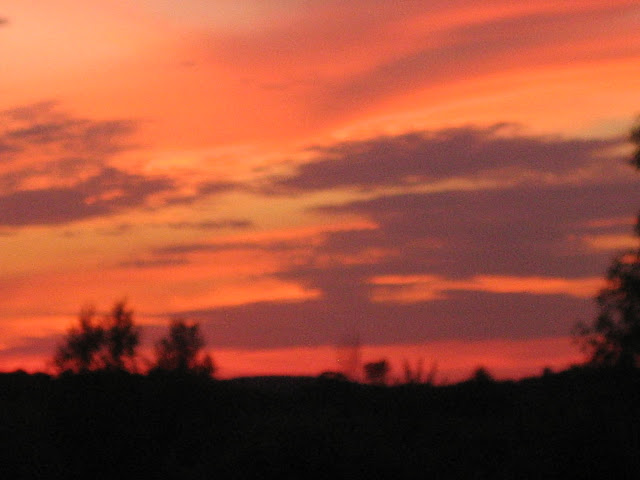 Thank you for stopping by. I love to hear from you.

Posted by Patsy Irene (Chillin' with Patsy) at 5:55 AM