Time to Move On, The Ridge, Some Rain Showers, Some Wildflower Picks, Good Neighbours

Bill and I were both up just before 7 again this morning. Is this our new norm? Today is Monday, June 18th and we hope every Dad out there had a wonderful Father’s Day yesterday. I know Bill enjoyed his very much. We had our morning hot drinks and read a few blogs before hopping into the shower. May as well get the last good pressure-filled shower while we are here.


We opted not to eat this morning, not feeling hungry enough before 9 to dirty more dishes. There were snack bars in the truck and treats for the little bum. We were hooked up and pulled out of the park after saying goodbyes to our buddies and a couple of other friends at 9 on the dot. That was the plan! This trip we met Paul and Judy who were full-timers parked across the road from us. Always great to make new friends. 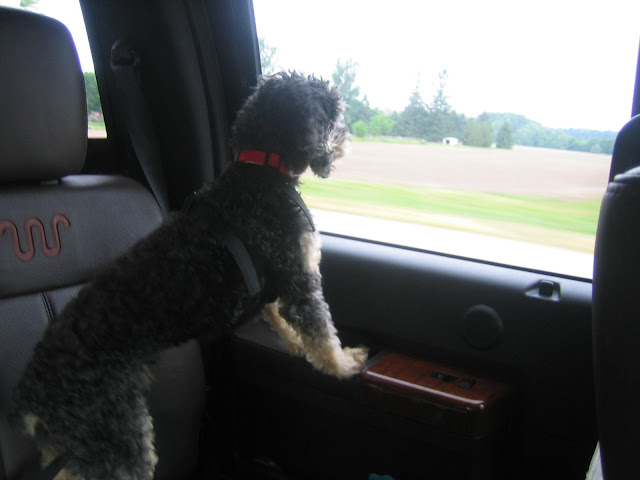 It was a hot and humid start to the day, 75F/24C before 8 o’clock. I don’t think it dropped much below that overnight but we had both air conditioners set at 72 so slept well. It was an uneventful drive and when we arrived in Exeter at 10, Bill pulled over to the side of the 4-lane highway to drop off a master key at Toyota for our Corolla. We found it in the Suite after bringing the Rav4 home. I waved at Cliff, our salesman, as Bill met him in the parking lot. A really nice young man.

The next time we stopped was after Harriston as we turned onto CR6. We opened slides and all 3 of us answered nature's call before driving the last half hour to home. It was here that we got a downpour and Bill and Clem got wet in the warm rain.

We’d had a wonderful week away and yet here we were, anxious to get ourselves set up again on home turf out in the country setting we all love. As we pulled in the driveway, we were watchful for our Geese and Turtles but didn’t see hide nor hair of either.

Bill swung around and backed the Suite up with perfection and I didn’t even have to get out of Black Beauty. When he stopped, he jiggled once about 12” and we were in place almost exactly how we were before we left. Am I blowing his horn for him? Absolutely! We just grinned at each other. 😊 I think I said "show off". Once the levellers were down, I opened up inside. The rain was threatening by the look of the sky but we had nicely set up before the clouds burst.

I took a walk around and checked out the gardens. Thanks to Donna and their good growth start before we left, my flowers were looking great and my tomato plants were thriving. All but 2 plants have baby tomatoes. Yay! I wanted to empty the mailbox but didn’t trust the sky so it gave me a good excuse to hop in the Rav and go down to collect the mail. Mostly flyers but also a card for Bill from Charlotte. Thanks, Char!

While down the lane, I saw 4 adult geese and 9 or 10 babies hurrying out of my way. I didn’t have any camera, of course, so no picture. That rarely happens! It was like getting the new vehicle all over again as I sat in the driver’s seat but this was too short a drive.

We noticed that our neighbor, Don, to the west of us, had anchored our car shelter with rope so that tells us that it got extremely windy up here last Wednesday. How nice to have good neighbours! Bill will have to thank him and return his rope.


Bill set up the barbecue and table before taking the truck over to fill the water bladder from the Acreage. Before leaving the park, he had put bleach solution into the fresh water tank to swish on the way home. He ran it through the lines and then topped us up to 54 gallons of fresh. While he was gone, I wandered around the property. I’d missed this place. Down the lane I was pleasantly surprised to find many varieties of wildflowers and picked some for our vase. 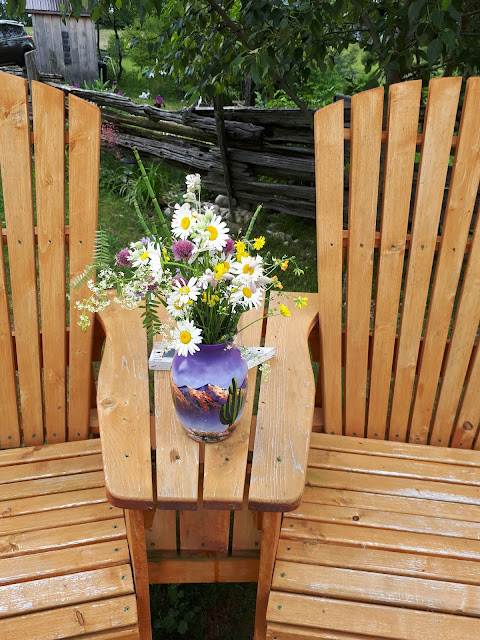 I’m going to hang onto the hope that we get a gentle rain that lasts long enough to soak the ground around my garden but in the meantime, I filled the watering can and watered the potted tomato plants which are not out in the open. Even they have babies. The carrots appear to be slow growing now that they’ve started but I’m holding on that hope as well, that they will be fine. Green onions and peppers are looking good too.

Bill’s next task was to set up the satellite dish and in no time at all we had both satellites up to 95%.  That is probably RV talk so forgive me if you don’t have to deal with setting up your dishes to get a signal. It just means a good thing for us. Even though the breeze is refreshing, the humidity is still hanging on. We are plugged in to power, because of the dull, cloudy sky, but shouldn’t need to run the a/c now. A cool front is expected to arrive soon.

It is hard to keep a good man down, I know, so now Bill is going out to the Rav to register for our FREE 3 months of Sirius radio. That came with the purchase of the new Toyota. We’ll take it! I do think my sweetie is winding down for the day though. We had a rest after lunch so he was full of energy. I only dozed for a few minutes but he had a nice sleep, as did our 4-legged child. The clouds can’t decide what to do but I know I’m ready to sit in my recliner and read more of my page turner.

By the time he got the radio set up, it was time to prepare supper. Clemson actually slept beside me until 20 after 5 when Bill began dishing up his supper. The rain was by now hitting the Suite windows from the west right around 5:30 which was fine because we had decided on a simple indoor meal anyway. Nothing fancy, beef wieners and beans on toast. We have eaten really well over the last week so this poor man's meal didn't bother us. 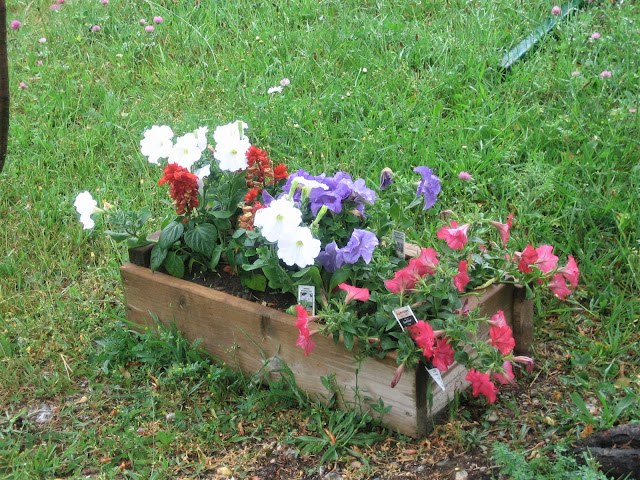 When supper and dishes were done Bill and I sorted clothes for taking to the laundromat tomorrow. We have quite a pile this time! The air has quickly changed after that last rain and we are sitting at 69F at 6:30. The change is crazy but that is what living in Southwestern Ontario is like. If you like the weather, wait 5 minutes and it will change. I went outside with the camera to capture some pictures of this pretty area after a rainfall. 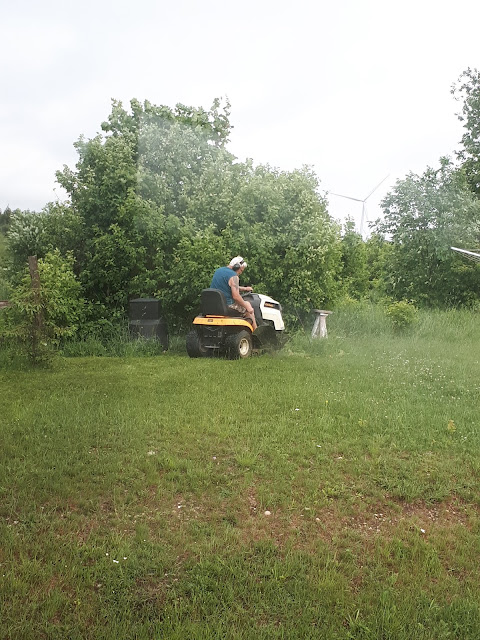 While I finished writing my post, Bill decided to cut a bit of grass. As I said, hard to keep a good man………..you know. It will make it nicer for me to hang clothes in the morning with the berm grass cut. The rest of the evening went quietly. I stayed inside with my book and Clemson. The breeze from the window kept me refreshed. It has been a good day, starting out in one nice place and ending it in paradise. Who could ask for more?

Thank you for stopping in today. Please feel free to leave a comment.