It was 5 am when I first woke and Bill was just getting up to hop in the shower. Bill is working today so wanted to get an early start. I stepped outside with him to watch him go and it was so refreshing standing outside at 6:15. As he drove out the lane, 2 graders were poking along North Line with a fresh load of gravel. The sky was looking dark, especially to the northwest so I figured I’d be getting rain soon.


I went back to bed but after resting for another 20 minutes I realized that I was too awake to drop off again. Clemson had already found a new spot on the couch so I got up, made the bed and made my tea downstairs. I read a few blog posts and comments and planned my day. One of my projects today is a simple one but as Mom’s Power of Attorney over her finances, I try to keep my 6 siblings informed.

I, with Bill’s financial knowledge, do my best to help make the best investment decisions for her money, but at the same time don’t play any risk games with it. It isn’t mine to mess with and we don’t risk much on our own investments anyway. So, this morning, I put an email together attaching the document for their information. We have said it many times, the way Mom’s life went during the 10 years before she sold her house, she is set for life with no worries regarding her care

Now, as I finish that up around 9 am, I see a difference in the sky. Things look to be improving out there and maybe the rain won’t come as early as we first thought. Good! At least, if I want to work outside a bit, I can. First though, I Googled Best Buy, The Source, Fitbit and Amazon looking for replacement bands for my Fitbit Alta HR. Bill and I must be hard on our Fitbits, they don’t seem to last as long as they do for others. Maybe because we wear them ALL the time and don’t have more than one to swap out with.


So, after an hour searching and trying a few ways to order on line and dealing with shipping charges, I called The Source in Hanover. Our closest store. Yes, they have 1 band in store and it is $40 before taxes. Hmm. I told him I can get a 4-pack from Amazon, even with paying for priority shipping (because I want it before we go ‘camping’, for the same price. He agreed, totally, that their in-store prices were ridiculous. Without a lot of inner debate, I placed my order.

Now, perhaps the bands will last longer, with swapping out different colours, I’ll be much more fashionable at the same time and I’m still going to glue the little plastic piece on my old one and wear it for working outside. I just hope the Fitbit itself holds up! I believe I’m past the warranty on it. I’m happy. I wanted to try a recipe that a friend posted so made myself a batch of Greek Yogourt Pancakes. Wow, they were delicious! I think Bill would even like these! Thanks Shirley!

With Clemson sound asleep on the couch, in his bed, I will let you in on a little secret. A sad little secret, he won’t know. When Donna and Gerry looked after Clem on the Tuesday of Bill’s appointment, and when Rob and Pat did the same last Monday, they both noticed that perhaps he is losing his hearing. ☹ We’ve noticed but could never be sure because in his old age, he sleeps more soundly than he ever did.

When he’s trotted away from us down the lane, we thought his nose led the way and he was just ignoring our calls. It is good (but not good) to have it confirmed by his babysitters. I’m so sad as we accept the inevitable that yes, there is some obvious hearing loss. It explains a lot since he was always very easy to speak to and he always obeyed, always, mostly. 😊
It is an even more of a wakeup call, leading us to what is coming in the next 3, 4 or 5 years. He doesn’t hear us when we open the door like he used to, so isn’t readily hopping down wanting to go out with us. I don’t know what our voices sound like to him, but it must seem different for him too.

I couldn’t really tell what the weather was going to end up doing today but when I got a text from my daughter at noon saying they were coming for a visit, it didn’t matter. I was disappointed only that my sweetie was working and not able to be here but still excited that they were coming. Bridgette and Chris arrived around 4 and by that time, there was no shade on our patio. The winds were a bit too wild for the awnings and they wouldn't have done any good at this time of the day anyway without attaching our sun shade.

I had moved 3 chairs and a table under the cherry tree and we sat there and caught up for the next couple of hours or so. Chris had never been here so he enjoyed wandering around looking at the property, the buildings and the pond but I think his favourite were the turtles. When he found one climbing the berm, he had to just stop and look at it as if to say ‘What the devil are you doing up here?’ After they left around 7:30, I found that she was looking for a place to lay eggs.

I offered to cook a pizza from the Foodland deli for supper but they were headed back home to Cambridge to eat leftovers. They sure drive a lot, good thing she has a Mini Cooper to get around in, cheap on gas! It was a great visit and when they went down the drive I noticed Bridgette had to stop for 3 turtles along the lane. We should have called this Turtle Alley for sure!
I couldn’t believe that I hadn’t eaten since my pancakes this morning so got the Weber lit and placed the pizza on a rack on top of the grill mat. The pizza took longer than the instructions on the box because I had to control the one (1) burner on the Weber, keeping it on low so it wasn’t on a direct flame. It doesn’t matter, I sat outside and read in between rotating it. It was probably closer to 25 minutes but it was really good! I’ll have the rest tomorrow or on the weekend.


By the time dishes were done it was 9 o’clock, latest meal I’ve had in a long time! Clemson went out for his last piddle just after 9:30 and at 10 I took my book up to bed. Another warm night ahead of us after a wonderful day. 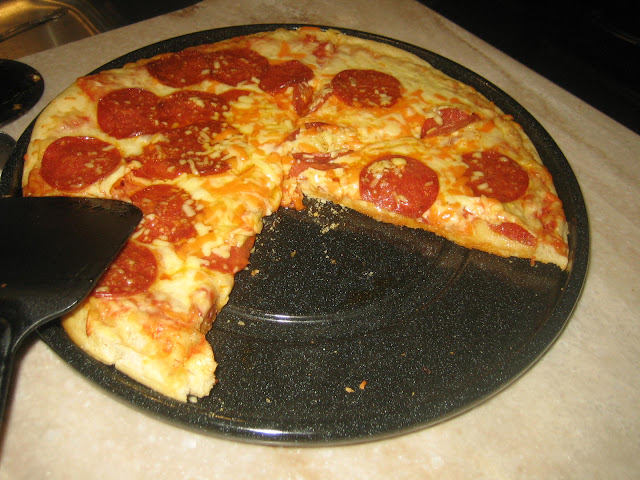 Still no rain and no storms but that is okay, the rest of my grass will get cut in the morning. Donna and Gerry have arrived at the Acreage tonight and it gives me comfort knowing they are close by too. I hope yours was a good day as well.

Before I say goodbye, I’ll share this Classic Quote of the Day: I offered a rocking patio chair and our 2 folding chairs to Bridgette and Chris. Chris without hesitation said “I like to ROCK!” The key here is to know that Chris is a rock musician. 😊 He got the rocking chair.
Thank you for reading. Your comments are appreciated if you wish to leave one.

Posted by Patsy Irene (Chillin' with Patsy) at 7:00 AM