I know I slept well as I woke up later on Tuesday, June 19th at 7:15. Hmm, I remembered being semi-awake when Bill let Clemson out for a piddle at 6:45 or so but it was a very restful slumber. I had gone up to the bedroom last night at 10 and watched a new program until 11 when Bill retired. Staying up that late is not my norm, for sure. I wasn't surprised that I'd slept so late.

We both got up and made a coffee and tea in our to-go mugs. The laundry just needed to be loaded into the Rav and we drove to town together. Bill helped load the 4 machines (lots of dirty clothes this week!) and then left to run some errands around Durham. I read the flyers on the bulletin board, as per usual, and read a few chapters in my book. The 4th of July by James Patterson, in case I hadn’t told you. It is a good one.

Bill returned with only 10 minutes left on the washers and with the basket full of damp clothes now, we stopped briefly at Rob and Pat’s. After waking with them next door to us for 8 mornings, we felt the need to say “good morning” in person. Ha ha, there was also another purpose for our stop. Back home, I hung the laundry and Bill hopped on the mower to finish the grass cutting.
It was only 10 so I got my mower out and cut as much as I could in half hour before the battery sounded fatigued. It didn’t get charged after I cut the last time, over a week ago so I wasn’t surprised. I cleaned up and changed to go and visit Mom. There is a vendor, Geri Fashions, who brings clothing into Rockwood for the residents and I’d never taken Mom down before. She was asleep on the bed when I arrived but was delighted to be woken up.

We went down to the auditorium and there was a very nice selection of everything they would want. I told Mom just to look and see if anything appealed to her. She surprised me by choosing some pants, some tops and a comfortable looking lounge set. By the time I needed to take her to lunch, she had switched to asking the prices but I kept her mind off that as much as possible. It will be nice to make a switcharoo in her closet, out with the old and in with the new. Except for her favourites. 😉

I left her at her dining table and went back to take care of the bill. The ladies put the items into a bag with Mom’s name and they will be labelled accordingly before placing them in her closet. It was easy to tell by the look on Mom’s face, which ones she would wear and which ones would be a waste of money. We saw Rob and Pat down there as well with Aunt Mary who enjoys choosing her outfits as well.

I stopped at the Rethreads store in town and dropped off the box of donations I had leftover from the yard sale. Then it was homeward bound where Bill had finished the lawn cutting and was into list-making for another project on his agenda. This is a beautiful day, a lovely 70F/21C. Perfect for whatever you wanted to get into. I can’t finish the lawn until tomorrow when the battery is fully recharged.

Since we hadn’t eaten, Bill made himself a toasted tomato sandwich and I toasted up 2 crusts left in the loaf. Yes, it is bread but I spread butter and sugarless homemade jam from a local on the pieces. That is my justification for toast and jam. We have unplugged from power as the sun is prominent enough today to keep our batteries charged. I made a quick phone call to Old Joe’s Cabin in Walkerton making a reservation for dinner tomorrow night. More on that tomorrow.

Bill and Clem were ready for a snooze. They walked to the mailbox together and Bill said Clemmy was quite playful outside for half hour. Probably wore his little 13 yr. old body out. The rest of the afternoon went smoothly, I concentrated on my book and Bill puttered around on his planes and other small projects. At 4 I brought the clothes in off the line and we took turns putting them away.

I finished the mystery and filled Bill’s empty hangers (he’d purged his clothing a week or so ago) with the shirts that he’d selected of his Dad’s. I’ve jokingly told him that I shouldn’t be seeing him in the same shirt day after day after day. Men, I’m thinking they’re all the same, tend to wear the same thing over and over which just makes a ‘dirty’ shirt that much more difficult to get clean in the wash. Anyway, he doesn’t need to do that now.

At 5:30 my hunger bells were going off so I asked Bill to light the Weber and I prepared some potatoes in butter and foil for grilling. We have a 3-pack of small pork loin chops that are thawed and we can share. A bit of mixed veggies on the side will make for a good supper. The clouds have moved in but it is still a very comfortable 70F, so not much change in the day at all. 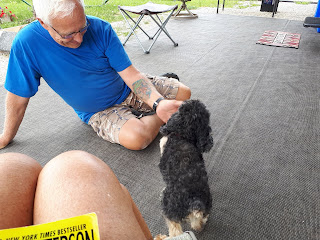 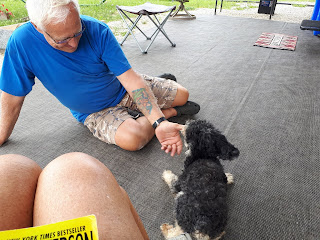 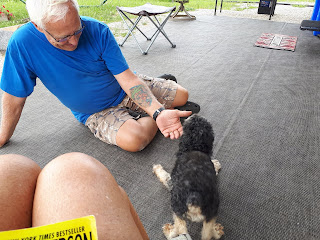 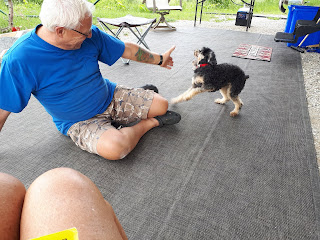 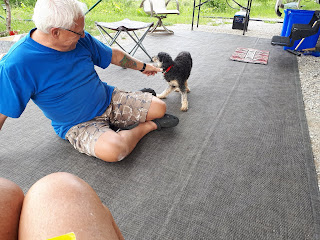 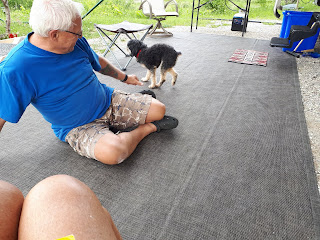 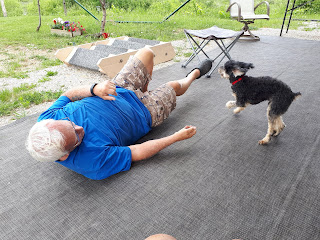 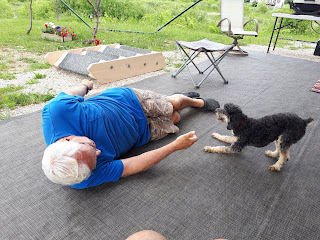 This has been an enjoyable day. I had fun shopping with Mom, actually helping her to spend some cash. Mom is forever under the illusion that she is outside the door to the ‘poorhouse’ with one foot about to step in. For most of her life, with Daddy, they struggled to make ends meet. That is what she remembers and is always concerned with cost. Today, we stepped away from the door and added to her wardrobe.

After supper and dishes, we watched some tv together and I chose my next murder mystery to read. I’m going to try Bad Guys written by Linwood Barclay, it looks like a good one. Bill put the riding mower away in the shed and we decided that the bunky doors and windows could remain open. There was no rain in the immediate forecast. I finished my post and relaxed with my sweetie.

I hope yours was a fun day too. The humidity is gone and the air has cooled down considerably. We are still enjoying these very beautiful days. Thank you for reading and for any comments you wish to leave.