On Wednesday, June 27th we were up and about at 6 with a full morning planned. We opted to skip our home coffee and tea and after getting washed, left Clemson in charge as we drove eastward to Exeter. We had an appointment to have the Rav 4 looked at by the guys at Toyota.

Okay, so I told you that we’ve never had a vehicle with a sunroof before, right? Yesterday was a beautiful day, right? Yup, no sooner did Bill sit in the driver’s seat when I said “oh-oh, we left the sunroof open”. Water was visible on the console and the seats were dark with dampness. Crap! He was up and out of the seat in no time. We need a post-it note on the dash and in the Suite perhaps, to remind us to check before we go to bed. LOL

I grabbed the quilt from the cargo area and draped it across our seats and put one of my rain coats over the back of each seat. There was no blame here, we were both in the Rav the day before, both equally responsible. A lesson learned. We left the Suite at a few minutes before 7 and arrived at the Timmy’s in Exeter around 8:30. Time to fuel up a bit, stretch our legs and check out each other’s wet bums. 😊

Bill ordered his double, double coffee and a frosted cinnamon bun, hard habit to break but at least it isn’t at all regular. I ordered a steeped tea, double cream and a grilled sausage and egg breakfast wrap. I love them even though the sauce they put on them is a bit spicy. Toyota was not far down the road on the south end of the town and we drove right into the shop. Marria (pronounced Ma-rye-a) was out immediately to welcome us. What a great personality she is! We told her our sunroof story and we all laughed about it.

Sitting inside to wait, I noticed the free wi-fi sign in the waiting area. Cool! We both opened our phones and caught up on a couple more blog posts over the last few days. Still not enough time for everyone’s but it felt good to be online without using our own ‘precious’ data. We’re still under the wire, by the way, with just a few days left. We might make it by being extremely frugal. I know many of you have no problem with your data allotment but we were used to unlimited for a long time and it has its challenges for us.

Marria checked in on us at one point to tell us the Rav had gone in and then returned 30 minutes later to tell us that they found the problem. It seems an itsy-bitsy spider went up the a/c spout. Well, you get the drift. A web was created and it clogged the hose so that the water backed up into our seating area. That’s crazy! Nancy K, I was just reading about your black widows and the webs you’d gathered so goosebumps ran up my arms and across my neck. Anyway, an easy fix. 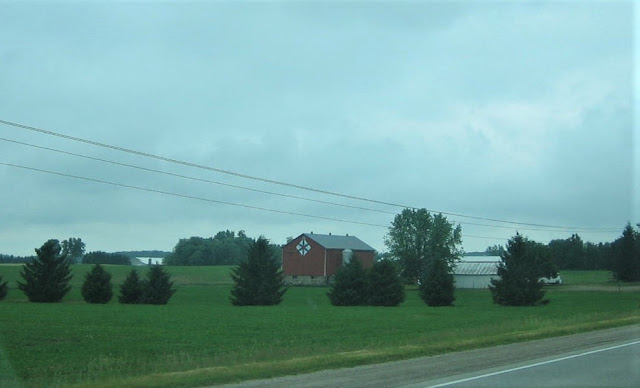 They took the remaining 30 minutes of our visit to do their best drying the floor and seats for us before handing us the 0$ bill and sent us on our way. We pulled out at 10:45, 2 hours later. What a nice bunch of people, friendly, accommodating and pleasant. The rain that was evident on the windshield had stopped down the road before reaching Harriston and we didn’t need our wipers until we were on the way home again.

We detoured, of our own accord, towards Clifford and stopped in Hanover at the Bread Store before heading home. Bill needs bread for sandwiches for when he is on the road and our stock at home was down to a couple of crusts. That is the part I eat, when I have bread. I like them toasted with peanut butter. He made a sandwich for lunch but I wasn’t hungry for anything. That egg and sausage seemed to be enough for the moment.

My boys had their prerequisite afternoon snooze, although Clemson didn’t last long upstairs and he was down, curled up beside me in my chair. His Daddy calls him a traitor but that’s not fair if he just a Momma’s boy. Bill came down and went outside. We were advised by John and Marria at Toyota to roll the windows on one side of the Rav and blow a fan in, in order to complete the drying process. It’s what they do when they detail cars.


So, that was his plan. It was a complete Jell-o mix since no sooner did he get outside when the rain, coming from the south, began. It changed everything, so Bill worked inside the storage shed for awhile.

It seemed as though Clemson had an upset tummy today as he was at the door almost every 15 min. to go out. Of course, more so when it was raining, so I opened the awning and walked out with him. We have a little towel hanging at the door and it was necessary to wipe his back and paws before he came back indoors. 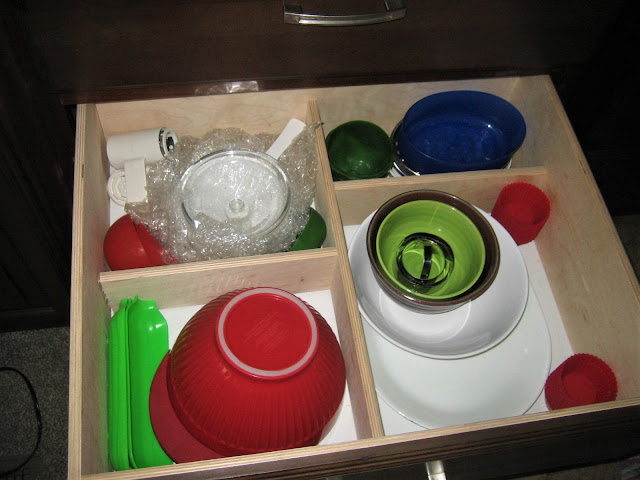 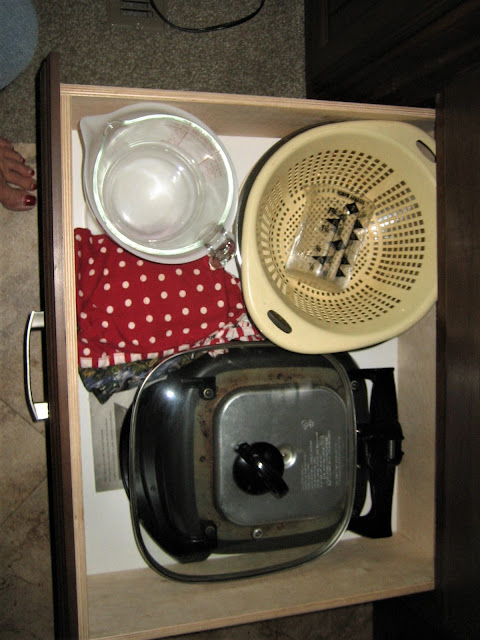 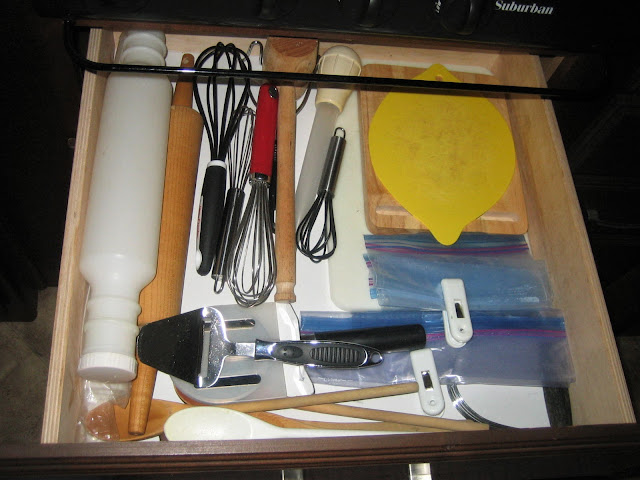 During their snooze and things that followed, I emptied 6 kitchen drawers. It didn’t seem like I got rid of that much but a good organization was made and things fit back in much better. There is still our ‘junk’ drawer that needs to be cleaned but not today. At 6 I prepared 3 pork chops and 1 chicken thigh for grilling. I steamed some spinach inside and wrapped some frozen corn in foil for Bill to grill. Hmm, what to have with it? A box of Kraft dinner to the rescue! 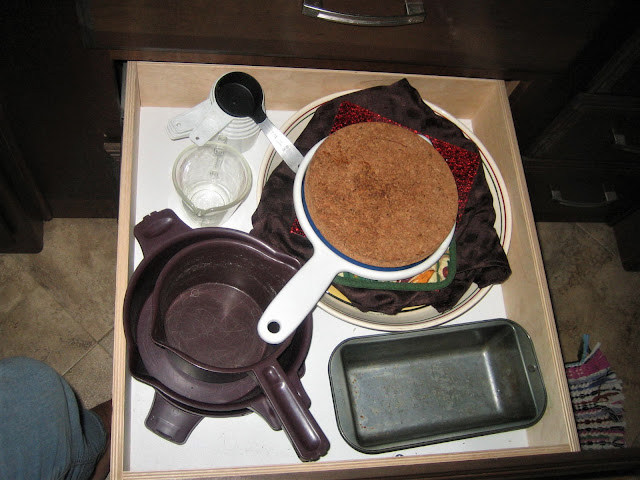 After supper, we cleared up the dishes and I put together some leftover scalloped potatoes, corn and a pork chop for Bill’s meal another night. I was pleased that the potato dish lasted for at least 3 dinners. There was another chop left that I put in the freezer and some macaroni in a dish in the fridge. Leftovers are always good. Bill just checked the seats of the Rav and they are still a wee bit damp. I hope they dry overnight (with the sunroof closed) as we were unable to try the technique suggested.

I couldn’t believe it, but as is typical in Ontario, the sun made an appearance at 7:15 after a totally dull, semi-rainy day. It’s been really warm though and the humidity is back, gearing up for the weekend. It is 70F/21C outside right now and 80F in the suite.

Our windows are open so it should be a nice evening for sleeping. I sure won’t need my extra blanket tonight!

Bill had to iron a couple of his good shirts, cotton on the clothes line smells nice but tends to wrinkle. I love that he irons his own things 90% of the time. We have our regular iron but a small rv board tucked in our hall closet.  It’s perfect for travelling!

The sky is clearing out just as the weathermen said it would, they seem to be improving with their forecasts. Imagine that!

Not much on television tonight so with reruns in the background, we went about our evening rituals. Mine is reading. This has been a pretty good day even though it involved going somewhere to get our vehicle repaired. I hope your day has been a good one for you too.

Thank you for stopping by. I love to read your comments.