It was 6:30 when Bill’s alarm went off on Saturday, Sept. 29th and he slowly got up and into the shower. I slowly got up 15 minutes later and dressed for my walk. We were on a bit of a time restraint this morning, wanting to pull out at 8ish. It was an absolutely beautiful walk, as the clouds continued to astonish me. I cut my walk a bit short but it was hard to do, I wished I could have kept going. Bill was out of the shower so it was my turn to get in the bathroom and get washed up. 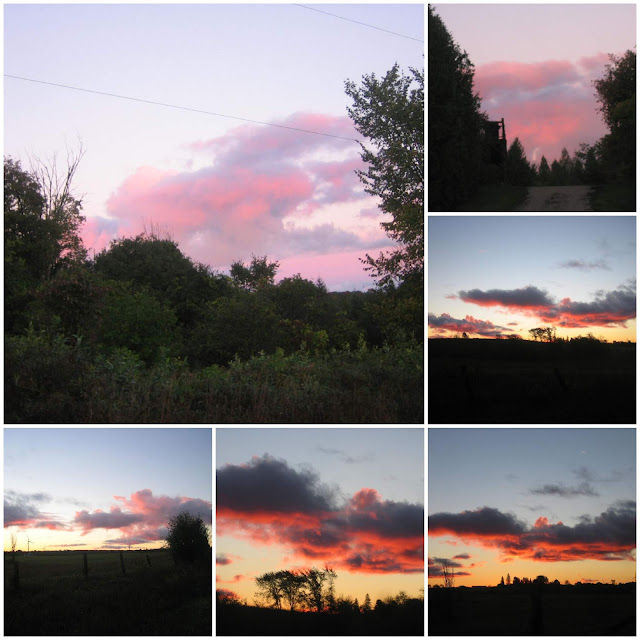 He made my tea in my Route 66 travel mug and we each had a piece of toast with a yogourt. I prepared Clemson’s ‘play date’ bag for Rob and Pat. They would be picking him up after they visited the Meaford Applefest/Craft Fair. He must have had an upset tummy and tossed some cookies on his blanket so cleaning that up and making sure he was okay put us behind a little bit. He seemed fine otherwise, but it is still a concern. He has been much better and sleeping through the night again.


Bill made his coffee and I grabbed everything I needed for the day. We were on the road by 8:15 so not too bad, after all. We followed our GPS out Baptist Church Road onto #4 to Flesherton where we turned onto Hwy #10. It is 8C and we have clear blue skies overhead and low-lying clouds settling around the horizon. They were so pretty at 7 before the sun came up and now they are just various shades of gray.

When we arrived in Shelbourne, I was reminded of what a pretty little town it is. We’ve driven through before. Bill pulled into the Ultramar on the east end of the town and fueled up at $1.20/litre. Not the best we’ve seen over the last few weeks but better than some places. As we got closer to Burlington, we saw some even cheaper at $1.17 so we kind of blew that.  Oh well.
We had pretty clear-cut directions from the Freeway 403 to Marilynne’s apartment so stayed on it right to the Duty-Free exit at the Buffalo, NY border crossing and turned left onto Central Ave. Simple, easy to find and she was waiting to buzz us in. Her 2-bedroom apartment is lovely and she showed it off with pride. I’m sure it has been a very long time since she had a place of her own.

We had a coffee at the apartment before driving a few blocks to Green Acres for lunch. It was a nice meal, lots of choices on the menu. My Turkey Cheddar Broccoli soup was delicious and my Hot Corned Beef wasn’t quite what I expected but it was enough to fill me up. 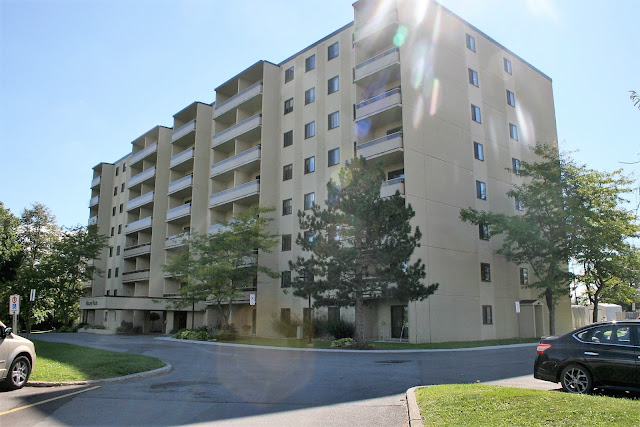 We drove back and visited for a while and before 3:30 we said our goodbyes. Marilynne rode down on the elevator with us and we were soon back on the 403 headed west. We partially followed the GPS and also Bill’s recollection to get us home.


At Mount Forest I texted Pat to tell her where we were so she had an idea of when we’d arrive to pick Clemson up. Apparently, he had been doing a lot of wandering all day, somewhat out of sorts but they said he had been a good boy. They treat him so well. We sat and had a late ‘happy hour’ drink together before gathering Clemmy’s stuff up and drove home.

I’d heard that there was a chance of frost overnight so Bill helped me cover my tomato and pepper plants up in the garden. It was about 7:30 after a very long day. The almost 3 ½ hour drive, there and back, took a lot out of us and we were tired. I went up to bed with Clemson around 9:30 and I’m sure I dropped off pretty quickly. It was a good day and the weather co-operated for our drive.

Thank you for stopping in. Your comments are always welcome.

Posted by Patsy Irene (Chillin' with Patsy) at 7:40 AM