It was another sleepless night in Priceville for all 3 of us. Our little boy still isn’t feeling good and was out 2 or 3 times between 2 and 4:30. Poor thing and poor Bill, the one on ‘overnight duty’. We woke and got up around 6:30 and 7 and wow, was it chilly!

It was a cool 48F/9C at that time of the morning so we popped the furnace on. Something wasn’t right, it shut off after 10 minutes. With some brain-storming on Bill’s part, he discovered that he’d forgot to turn the reserve (2nd) propane tank on so when the first one emptied, it died. Once he figured that out, we had heat and because of the overnight temperatures for the next few days, Bill brought our Blue Flame heater in from the bunky. May as well use it since it is much more efficient. 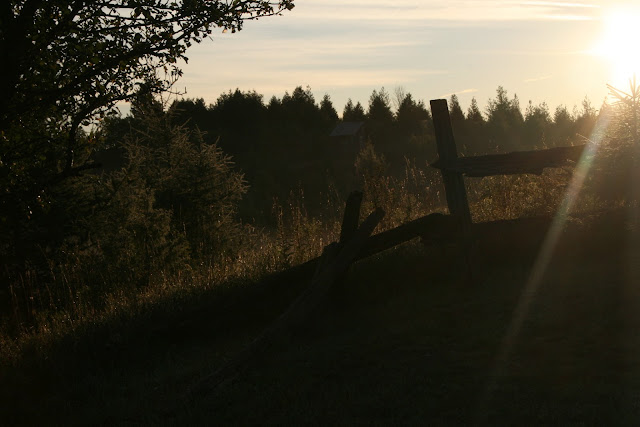 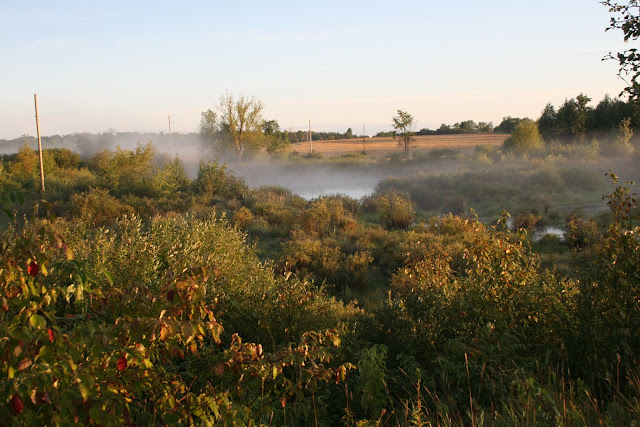 Before I get too far into this post, today is my middle grandson's 21st birthday. How did that happen??? Jacob is a determined intelligent young man making his way in this world. Living on his own, he has always made us proud of what he accomplishes. Happy Birthday, Jake!


Back home, I almost had a head-on with Rob in his new Edge. We are both about the same size so it would be undeterminable who’d get the worst of it. He was coming out of our lane and I was bee-lining it in. It would have been my fault. We just laughed at the story that would have been to tell our spouses. Bill was down in his Hangar and I went up to the hill to hang the clothes. Not much breeze for the most part but hopefully the sun will dry them quick enough.

I went inside and changed into shorts and went back out to cut the lawn. I worked steady and managed to complete the main area, moving chairs and the hammock as I went. Clemson was outside with me as I didn’t want him stuck inside with his upset tummy. He seemed quite happy, up on his stool in the shade and my chair in the sun and then a couple of trips down to see how Daddy was doing. I stopped before going down the hill beside the corral. I think that can be left for another day, it isn’t that bad.
We walked down to the Hangar and I told Bill I’d make us lunch. He’d just had toast earlier and I hadn’t had anything yet. I made us an omelette, no toast today, and we cleaned up dishes. 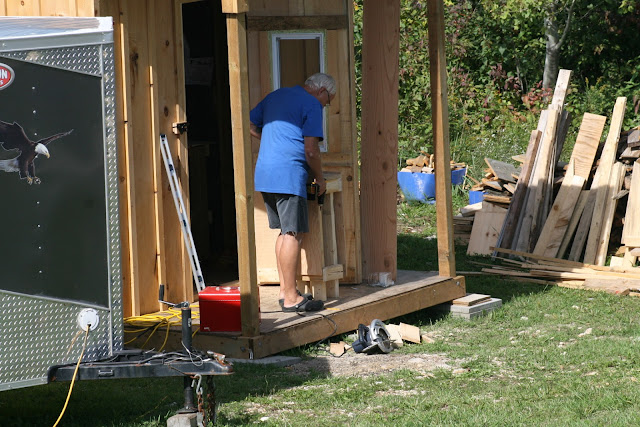 The day is going by so quickly and already it was 12:30. Bill went upstairs to have a snooze with the already slumbering Clemson and I got in the shower. When I finished, I put my mower away and moved chairs back into place. We were expecting Brenda and Randy around 6 for supper and we had an invite to Happy Hour at Rob and Pat’s.

Bill vacuumed the Suite and I dusted through the downstairs and cleaned the bathroom. Once he had his shower it was 3:15 and we drove into Durham. Some of the clothes were dry so I brought those in, but most were still damp. I want to bring them in before the cool air hits later. It was a nice visit with Rob and Pat and we were able to make a few more rubber coated plans for our travels south. Every chit chat gets us closer to having route.

We left shortly after 5 and came home so Bill could make Clemson his supper. I closed the windows in the bunky and in Rob and Pat’s fiver while Bill went to start bringing clothes in off the line. Within no time we had them folded, brought in and put away. Clemson still isn’t himself as he didn’t touch his supper tonight. We put his dish in the fridge, maybe later he’ll be hungry.

We tried to direct Brenda and Randy to our place, their gps was taking them on a wild goose chase. That is unfortunate and we hope it doesn’t discourage future visits. I have supper ready to put on the Weber and when they arrive, we’ll get it lit to warm up while they relax a bit. It isn’t fun getting lost, at no time, for anyone. They arrived before 7 and it was hugs all around. Always fun to see these guys from London.

We sat inside and caught up while they had a ‘stress-relief’ drink from the drive. At 7ish, Bill lit the barbecue and at 7:20 put the salmon on. Trying another one of George’s recipes, Salmon with Dill Sauce. I mixed the Caesar Salad inside and set the table and our Hi-low coffee table up for Bill and I. This works well without getting the 2 chairs out from under the bed.

Supper was delish if I do say so myself! It is basically all about the prep and timing on the grill. You don’t have to turn the filets or anything. The meal was a hit and after clearing those plates away, I served a Chocolate Swirl Cheesecake for dessert. I didn’t make this one, it came prepackaged from Independent but it was thick and very good. The dishes went into the dishwasher and we turned it on and gathered around the roaring fire Bill had going.

The night had cooled down but there was no wind at all. In our warmer clothes it was a nice evening. We conversed until 11:30 when we warmed our backsides and went to bed The‘kids’ should be warm with the heater going in the bunky and an extra blanket at the ready if they need it. It was dropping to 7C tonight. Brrrr. This was a great day!


Thanks for stopping in. I love to hear from you if you care to leave a comment.

Posted by Patsy Irene (Chillin' with Patsy) at 7:06 AM