Rough Night – Some Got Less Sleep Than Others, Hot hot hot is the order of the day, So Let’s Bake Cookies!

After being awakened 3 times through the wee hours of Wednesday, Sept. 5th, I was informed that my bed buddies were up 5 times. Clemson, for some reason, had urges at 11:30, 12:30, 2:30, 4 and 6 to go out. With his improved but still a bit loopy state, added to his obvious cataracts, darkness is not his friend.

Bill was a good Daddy and got up each time to answer the call by letting him out to do his business. There were a few minor accidents that we cleaned up and by morning, the little guy seems fine. I remained in bed and once I knew they were settled easily dropped off to sleep again. It was 7 when I got up to greet this hot, humid day. At that time, it was already 71F/22C.

I let Bill sleep and didn’t disturb Clemson on the couch when I went out for my walk. We had a job we wanted to do this morning before too much heat crept in so I only went as far as ‘Elvis's’ house and back again.

I had a feeling Bill would be up and raring to go. He was, I could see him at the storage shed starting to get things out. Today was the day we set aside to ‘attack’ the laneway with gloves, clippers, hedge trimmer and bladed weed eater.

All things went into the little wagon with the old generator behind the mower and we were off. No matter how much you prepare for the heat, even working in the shade, within the hour and a half it took us down and back, we were drenched and red-faced. I knew it was time to quit at 9:30 when I could feel my face burning up. Don’t check my blood pressure now, please! Good thing we were done as much as we were going to do today.

We just pushed the clippings off to the side, off the gravel, and put things away. My, how much nicer it looks! If there was a blade attachment like a hedge trimmer that would go on the front of our riding mower and slide to the right and left about 30” and up and down between 6 to 12”, we would invest in it. That would be exactly what we need. It would have to be universal, of course, so it would fit old and new mowers. Okay, inventors get to work!

I sat in the shade on our patio and once cooler, made my tea and Bill’s coffee. No sooner was I doing that when we saw Rob pulling up the lane with the Cedar Creek. Right on time! This was their offer to our friends from London who were looking for a place to stay overnight on Saturday, after the clothing exchange. I’ve said it before and will say it many times over, Rob and Pat are some very special people. Rob unhooked after doing the ‘swing around and back up’ into the spot and then sat with us with a coffee too.
We caught up a bit and he opened slides and was soon on his way. I watched him leave and Bill did a bit of trimming before putting his weed eater away. It was 11:00 and time to make us something to eat. I did the usual alternate meal to bacon and eggs and made us a toasted egg sandwich each. We worked for brunch today!

Clemson has managed to jump on the bed again today and I see him up there curled up with my shirt. I feel so much better that he is back in his routine.

When Bill went down to his Hangar, after dishes were cleaned up, I got the palm sander, the stain and brushes that I’d borrowed from Donna. I moved the King chairs over to the shade of the Roost and followed her instructions as to how they did their chairs at the Acreage. One coat of the stain and already they are brightened up so a second or third coat on the rougher spots will make them look almost new! I took a break so they could dry and came inside with Bill.

He was stretched out on his recliner for a much-needed snooze. My lower back was proof that I’d been in a position this morning that my body wasn’t familiar with. That told me to stretch it out and go for a little walk before settling into my own chair.

Donna and Gerry are headed out to the Acreage after lunch and have invited us for a swim on this crazy hot day. I’m not complaining by any means but it sure is nice to get an invite to take a dip. I think we’ll stay put though and just putter around here for the afternoon.


Bill went back out to the Hangar and I decided to do what everyone shouldn’t do on a hot day, I baked cookies! We are finding that being strict with our attentiveness to avoiding sugar and carbs that it eliminates a lot of snacks that we enjoy. We aren’t buying potato chips, no chocolate bars, no licorice so at night when we feel like ‘something to munch on’, we have nothing. That isn’t a good feeling, I don’t care who you are. Cheddar just doesn’t cut it unless we have chips along with it. At night, I mean.
So, I’ve been collecting Keto recipes. No sugar, low carbs, gluten-free, that kind of recipe. And right now, Bill, who use to grumble at my keto recipes, is quite open to many new things. The cookies are Low Carb Chocolate Chip Peanut Butter, Protein. Hmm, sounds good. I first made one batch of 12 cookies and when they actually turned out good (how can they stay together without flour?) I mixed up a double batch. I should have about 48 cookies by the time I’m done.

At 5, I turned the boob tube on, because that is one of our late afternoon, inside routines. It is 86F/30C on our thermometer and that is outside. Inside, it is staying around 80F/26C and it is surprisingly comfortable, even with the convection oven baking up a storm. So, the cookies are done and approved by Bill. Yay! That recipe gets a check mark for ‘Easy’ and ‘Tasty’ plus ‘Healthy’! 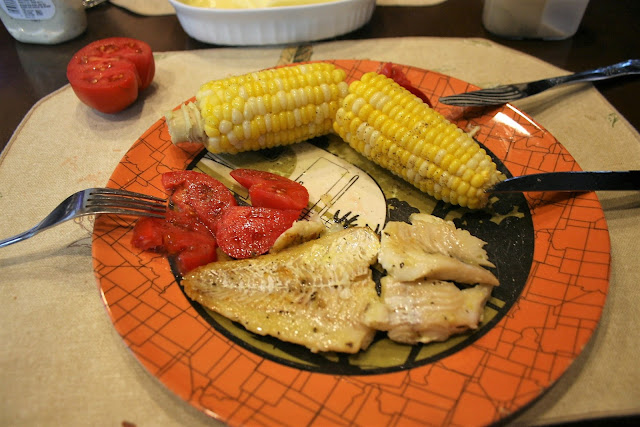 Bill came in before too long and we chilled in our chairs until 6. My lower back is giving me grief so moving feels like a punishment. My left tricep is also showing signs of not being used very much, the muscle hurts when I extend my arm. Such as it is, we are pleased to have the hardest part done down the lane. At 6 I boiled us each a cob of corn, only 1 left for another night, and fried Tilapia loins for supper. Bill set the table and it was another good dinner.

After cleaning things up, we relaxed for the remainder of the evening. I think I took a walk and then closed up the bunky for the night. Storms were coming, according to both our weather networks so we wanted things ‘battened’ down. The rains began around 9, heavier at times but it seemed to filter off to just a gentle downpour. The winds had been strong all day, off and on, and were much appreciated if you were out-of-doors. 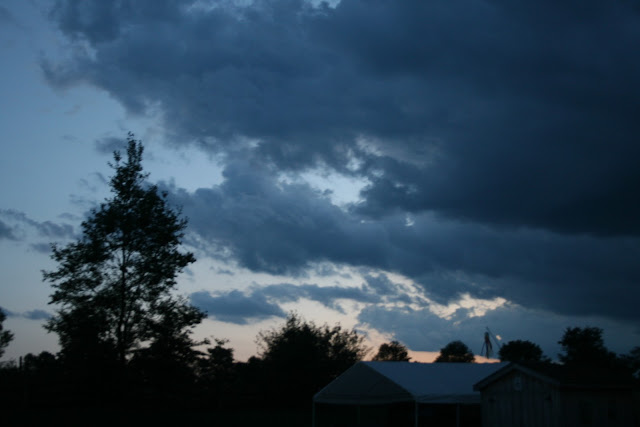 I went to bed with Clemson at 10 after watching a recorded program on the PVR and Bill followed at 11. This was a bit of business and a bit of relaxing kind of day but it was all good. I hope you can say the same about yours.

Thanks for taking the time to stop by!
Posted by Patsy Irene (Chillin' with Patsy) at 6:30 AM