I woke around 6 am on Tuesday, Sept. 18th. Clemson was curled up beside me on the top sheet and when I pulled the chenille spread up to cover him, his soft breathing remained uninterrupted. I tossed and turned a bit until 7:05 and got up. It looked cloudy out my window but I got up anyway. I couldn’t go for a walk until sleepyhead had been up once for his piddle.

After texting Bill and chatting on the phone with him, I decided to make my tea and read blogs for a while, waiting. When Clemson got up at 8, the air was very misty and even though warm at 64F, I decided I could end up wet at the end of my walk. Maybe later, I have some things to do this morning anyway. So, I cleaned up and drove into Durham with the bunky sheets in the back seat.

First, I stopped at the bank to get some cash out in case I needed it at the laundromat. I would need a bigger washer for 2 sheets, cases and a duvet cover and didn’t have enough change for that machine. You would never think that the sky would be clear with sun this afternoon looking up at the sky this morning. But, sometimes they’re right and I wanted the sheets to dry on the line.

After the bank, I drove to Foodland to check their prices on cases of Coke and Gingerale. It wasn’t on sale so I drove to get the laundry underway. The place was busy! I got the last big machine and then took a walk downtown and back to the Timmy’s before my time was up. Through texting, Pat informed me that the sale was still on for pop in Hanover so that settled where I’d go next. I didn’t recognize who was honking at me in the dark gray SUV as I was waiting to turn, until I was behind Rob. Still not familiar with their new Ford Edge.

There was a detour north of the traffic lights while they worked near the bridge just before Rob and Pat’s street. This meant driving through the lights and taking the first street to the left so I could zig-zag onto #4 highway again. At the Independent I got 3 cases of pop at $3.99/12 and drove to The Bread Depot for a loaf of Bill’s whole wheat bread. The owner in there is so nice, we catch up on weather usually and today we discussed bread choices. White or whole wheat. Small town concerns. He probably knows each resident's choice by now.😊

Coming out on 17th Ave. I drove right across Main to Donna’s and dropped her mirror on their front porch. We’d borrowed it for the clothing exchange. Donna was working, so I had no intention of stopping in to say hi to Gerry, instead wanted to head home and hang the sheets. By the time I got home and unloaded the pop, the sun was doing exactly what the weather network said it would and I hung the sheets on the line. They’ll be dry in no time with the nice breeze up here.

I’m seeing a lot of blue jays up here now and reading about them, they apparently ‘form large flocks at the end of summer, the end of breeding season. Many jays from northern US (and Ontario) will migrate south during the winter but there is a small group that will stay throughout the year’. Interesting. I can’t get over their brilliant colours, so easily recognizable with their white breast, blue crest, black collar and black beak. They are easy to watch, sitting or flying.

Bill called at noon hour just as I finished making myself an egg salad on rye toast to eat with my coffee. No need for a/c today with the nice breeze blowing in the windows. I’m not feeling uncomfortable with humidity although I’m sure that is why it feels so damp. I changed the water in my fresh flowers from the girls last weekend, well 10 days ago, and marvel that with a bit of trimming off the bottom, they are shorter but still looking healthy.

When Bill leaves Can Am this afternoon, he will be pulling a 27’ Tracer travel trailer with a company vehicle. Marshall asked if Bill could deliver it to Wiarton ‘on his way home’. Not really on his way, but it isn’t too far out of our way. It makes sense for Bill to do it and only have to come back this far for the night. If Marshall had delivered it, it would mean another 3+ hours back to London tonight at whatever time he finished setting it up.
Depending on timing, I might hop aboard (he has to come through Durham anyway) and go along for the drive to the park. As for now, I’m getting back into the picture selection. I hope to be able to get another couple of months’ worth chosen today. Provided there aren’t too many ‘winged, colourful’ bird distractions! So, that worked well until about 2:30 when I finished January and went for a walk to stretch my legs.

It is quite a nice day out there at 70F and my sheets are all dried and smelling great. I took them off the line and placed them on the mattress in the bunky. No point in making the bed yet until we see tomorrow what is forecast for Thursday. I sat outside for a while and texted back and forth with Donna and Pat, letting them both know where we’ll be tonight. Bill arrived home just after 5, also just after Clemson got his much-needed supper. He's starving, don't ya know? 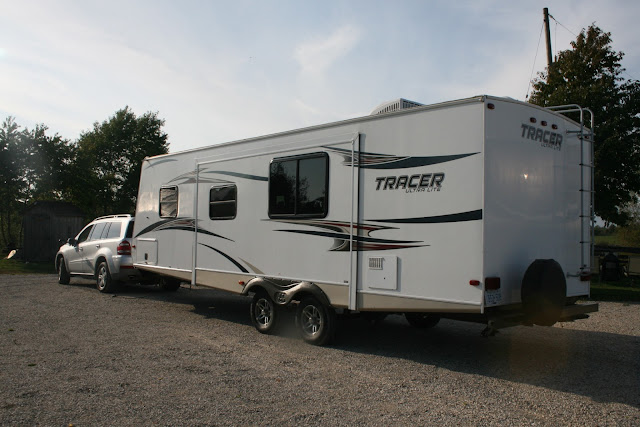 He was hoping to just change his clothes and we would head out. He asked me to check the lights on the trailer and they weren’t working. After a bit of problem-solving, it was obvious that the light connection between the tow vehicle and the trailer was the issue. He wasn’t sure how long that had been an issue but we couldn’t take a chance driving any further, so he unhooked and hooked up to Black Beauty.
It was 10 to 6 when we pulled out of the Ridge and 5 after when we pulled out of the Esso station in town to put some fuel in the truck. Driving to Wiarton is pretty much a straight run on Hwy 6 through Owen Sound, Springmount, Shallow Lake, Hepworth and Clavering. The Trillium Woods Campground is actually in Oliphant even though the address is Wiarton. Lyle, the owner of the Tracer, called as we were about 5 minutes from the park and met us at the front entrance. 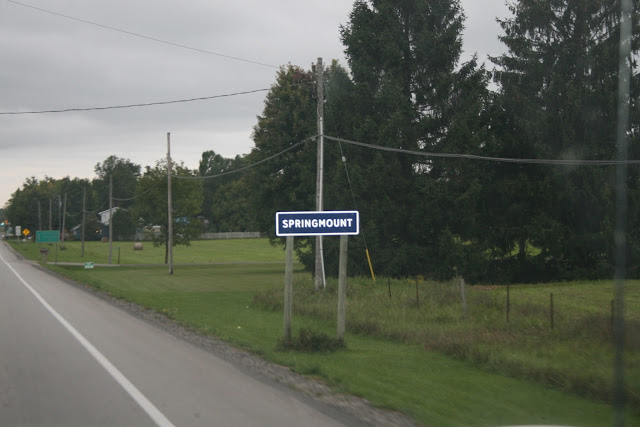 Following him in through the wooded park gave us concern when we saw the narrow lanes and treed sites. When he finally stopped and showed us their site, Bill had his doubts about whether he could back the trailer into the spot.

Bless him for trying, but after 5 or 6 tries, it was either going to end up with a damaged rv or truck or both so he dropped it right there in the lane. They called the owner of the campground to bring his tractor and we left them in good hands. Nice couple who plan to leave it on site as a seasonal. 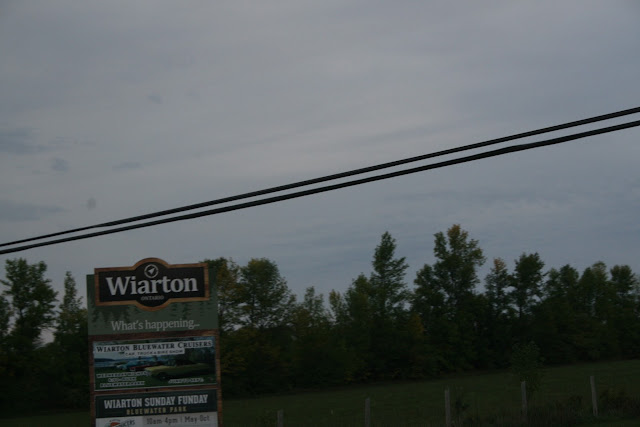 As much as Bill would have helped get it leveled and set up as a service from CanAm, he wasn’t able to offer either. Even with the CanAm Mercedes, there was no way to get a trailer that length in their spot so we didn’t feel that Black Beauty was the problem. We left by 7:45 and still hadn’t eaten. By the time we hit Owen Sound’s fast food section, we decided to grab a quick bite at Mcdonald’s. We’re not too proud to fall off the food wagon once in a while and just eat to fill a spot in my tummy .

We were home around 9:30 and decided to go up to the bedroom to watch some television and/or read. Bill caught the first program of the season of Highway to Hell. He enjoys watching them travel the Coquihalla Highway. My only disappointment from yesterday was that we missed watching NCIS at 8 and neglected to record it. It was the finale from the last season that we missed in the spring. They are usually cliff hangers of a sort.

It was a good quiet day, I’m getting far too good at those! I was happy to have Bill home and so was Clemson, who ran out to greet him. I hope yours was a pleasant day as well.
Thank you for stopping by. I appreciate your comments if you care to leave one.

Posted by Patsy Irene (Chillin' with Patsy) at 7:14 AM