It was 7 when we all crawled out of bed on Friday, Sept. 14th. Almost half of this month is over already! That means we have a mere 36 days before we pull out of here. After putting some plans together yesterday, I feel even more of a draw to head south. Seems like we still have a few things that we need to do first and that includes a few visits to and from the Ridge.

I went out for my walk, dressed appropriately today. Sleeveless top but because of the dark blue clouds coming our way from the west, my wind breaker was wrapped around my waist. The sun came up over the horizon beautifully but I watched the battle as it rose up only to encounter the heavy bank of clouds. There was no breeze this morning again, very calm across the countryside. It was a great walk. I turned around before reaching the ‘dog-barking’ farm so as not to disturb the peace. 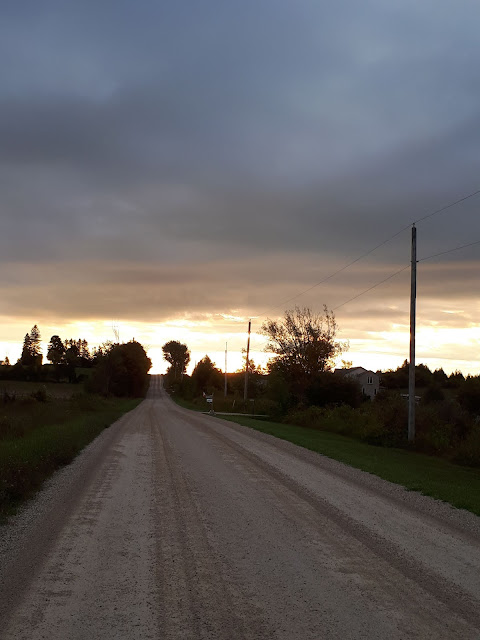 Back at the Suite, Bill had made his coffee and was catching up on blog posts. I’ll have to sit and do that as well at some point today. The dark clouds only brought a 10-minute downpour and not heavy by any means before it moved off to the north. Bill glued a couple of things on his Stinson down in the Hangar and then came up to re-affix glue to some of our cupboard door catches. Some can be fixed that way and others will have to be replaced completely.  At 10:30 I began making our egg omelette sandwiches. 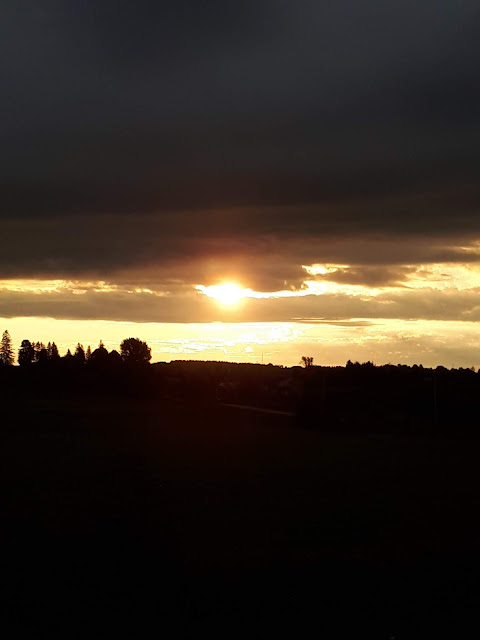 By the time we’d cleaned up dishes, there were odd patches of blue sky here and there. I guess we know who won that fight, my hero, Sunshine. At 12:30 Bill got the call that our new Champion generator was ready for us to pick up. Yay! These guys couldn’t apologize enough for the delay (which was partly our fault from the beginning) and gave us an amazing deal on their labour. They only charged us for 2 hours and we know they spent far more time on it than that. We are very pleased with the cost of $415, it could have been so much more. 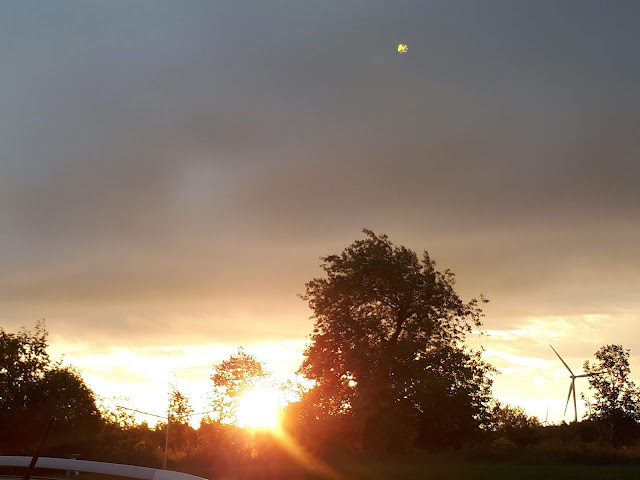 When we returned home, we wanted to get the required update on our Rand McNally Good Sam GPS. I needed to do that on my laptop and we took advantage of any other free updates that were available. Within 30 minutes, we had a few updates installed and re-established the unit in the Rav4. It is now ready for our journey to the south. Bill poured us each a cold icy drink and I’m happy to be drinking a pop again. Diet Gingerale is quite refreshing and a nice change from the flavoured Soda Water. 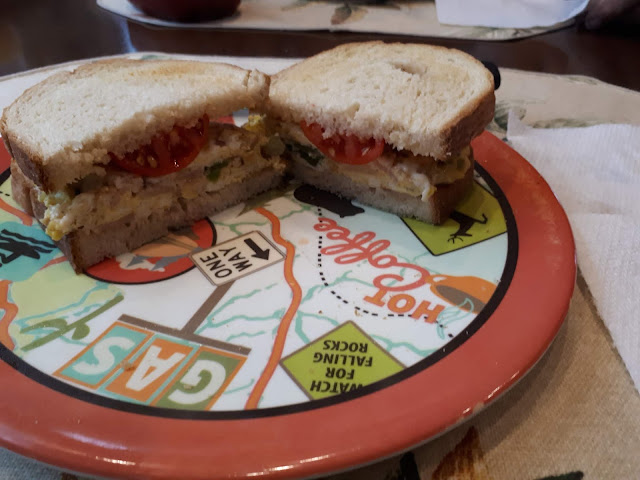 The small freezer in our beer fridge out in the bunky got jammed full last weekend and an already ‘not terrific’ freezer failed to keep things frozen for us. There is a lovely purple mess of popsicles that I’d bought and had to move out there before our company arrived. Hmmm. Today is the day to clean that mess up and see if any can be salvaged. It wasn’t as bad as I thought, all popsicles are sealed even though some are soft. I had a mostly frozen one and decided they were fine for now.

I took my laptop and my Kobo outside and sat in the shade of the awning today. It is too hot for sun-sitting today. I poured into the first 10 chapters of Nothing to Lose without hardly batting an eye. Another good book. We heard from our friends who were in London and caught up on how their son-in-law was doing after morning surgery. We pray there is improvement in his life as they move forward.

At 4:30 Clemson was hungry and I’d already decided that I was going to skip the chicken/rice meal today. He is such a creature of habit that I instead just added some mashed potatoes to his hard food that was in his dish. He ate that up as if he’d not eaten for days. He would get fed again at 5 with his regular soft food. It seems like things have settled down in his tummy.


Bill and I settled in our chairs and as I was sitting with Clemson reading, I felt uncomfortable with the humidity. Inside, outside, nowhere felt comfortable. The thought of eating tonight didn’t appeal to either of us so we had hamburg patties and corn on the cob. Simple, filling, however not on the top 10 best meals list.

After dishes, we moved outside where it was a bit cooler. Bill turned the ‘garage’ tv on and I wrote more in my post as we sat out there together. Tonight, we were expecting Bill’s youngest daughter and her fiancé for an overnight visit. Jess and Matt would be arriving from St. Mary’s around 9, sleeping in the bunky and heading out around noon hour. Matt has a hockey game tomorrow afternoon.

The sky was doing another dance tonight with big dark clouds moving in overhead. I didn’t think we were destined to get a storm or rain, for that matter, but we’ll have to see. We won’t need to worry about the kids in the bunky keeping warm tonight, that’s for sure. 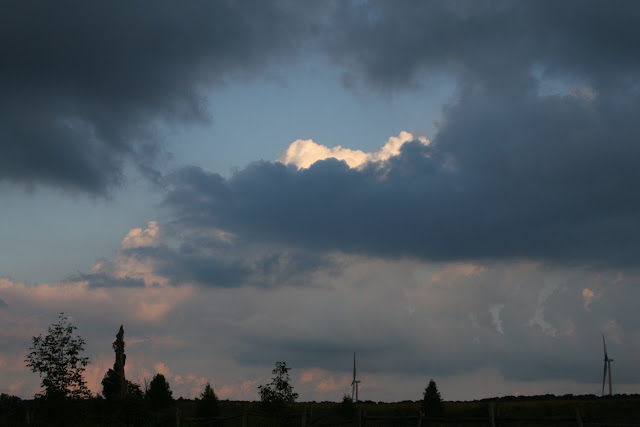 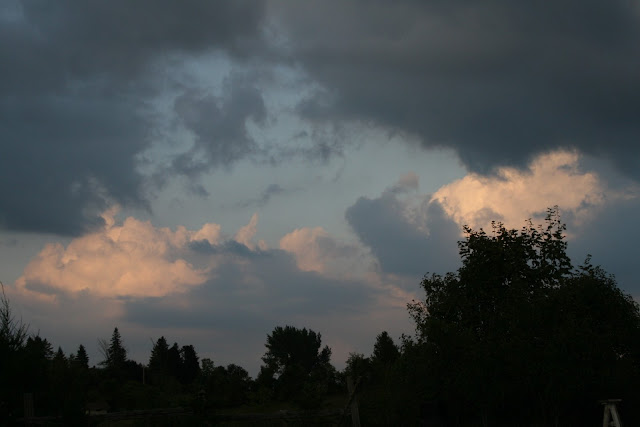 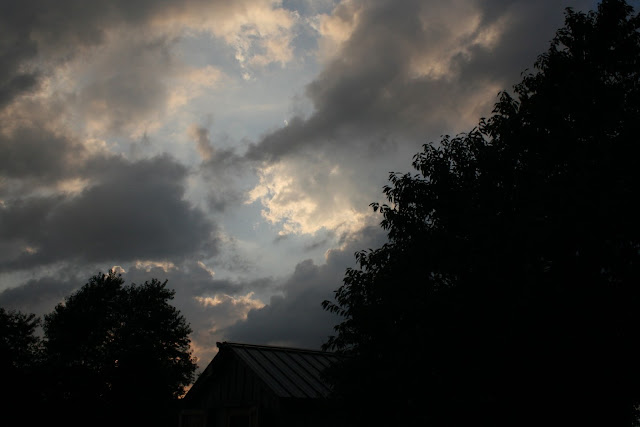 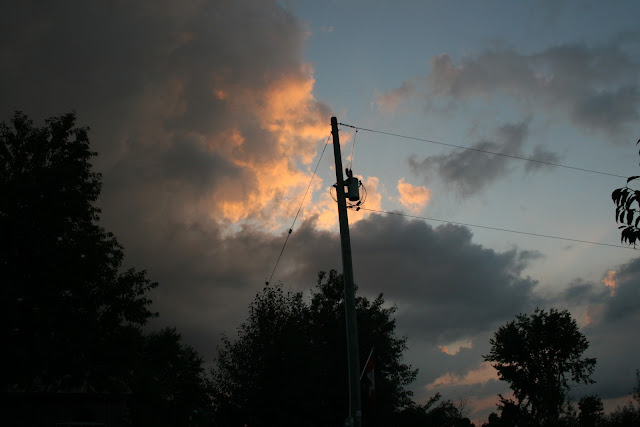 What a dramatic change from last weekend, you can sure tell we are in Ontario! We moved inside when the sky looked too threatening. Even with no wind, I didn’t want to be scrambling for cover at the last minute.

This has been a pretty good day, hot and humid but full of some lazy times. I hope you’ve had a good one too. More on Jess and Matt’s arrival tomorrow. 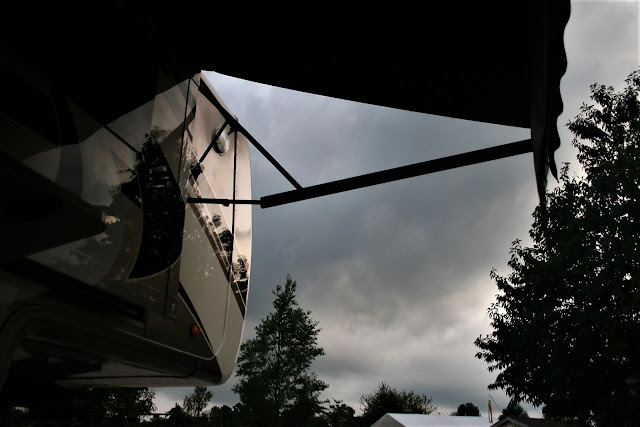 Thanks for stopping in. Comments are always appreciated.