Neither of us was surprised to see 7:55 reading on the clock when we first woke on Saturday, Sept. 1st.  We slept quite well for 6 hours. I know I dreamt of gambling, I wonder why! I probably could have dropped off again but when I saw the blue sky, I decided to get up with Bill and Clemson. We had our drinks after opening the shades and I skipped my morning walk today. Maybe later.

We read friend’s blog posts and patted ourselves on the back for ending the month of August with about 6 gb of WiFi leftover this month. Maybe we’ve learned to be more moderate with our usage. We’re all different and have different requirements so there is no comparison to anyone else and the data they use. Bill went down to his cargo trailer and Hangar for a few minutes while I made scrambled eggs and bacon.

When the dishes were cleaned up, we drove into Durham. It was 11:10. It is important that you know the time because we had forgotten it was the weekend of the Durham Fall Fair. Bill and I have long since outgrown the hustle and bustle of town or city fairs but we soon found ourselves smack dab in the middle of a traffic jam. The parade was meandering slowly down Garafraxa St./Hwy#6/aka Main St. and onto Hwy #4/Lambton St.W.
For those unfamiliar with the town, this is our main intersection, the only set of traffic lights. Our RBC bank is right on the corner……………..way down there. So we took back streets to get us to the south of town and into the busy Esso gas station to top the car up with fuel. As we zigged back towards the bank, on back streets again, I walked to the bank and back so Bill could avoid the congestion. It was finished when I got back to the Rav and we followed #4 out to Bob’s Used. 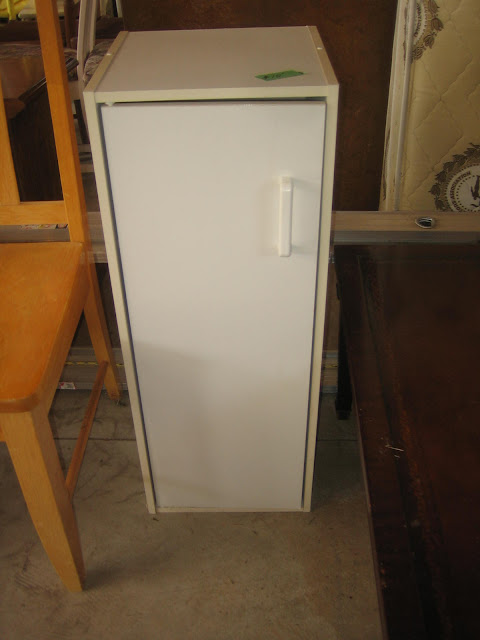 Bill considered the cupboards I’d found and for $10 ea. Figured they would work just fine. Yay! I did good this time! They loaded them in the back and Bill unloaded them on the Hangar porch. By the time we came inside, I felt beat and we all had a bit of a siesta before our afternoon drive. At 1 we took our cameras and our water and drove to Chesley Lake. These are roads that are familiar but only because of the small-town names of the area.

I lived in Elmwood for a few years around the mid 1960’s and around Paisley prior to that. I can remember our parents taking us to the Chesley bridge to swim but we moved so much when we wee young that I can’t recall the exact years, 1963 to 1967 maybe.

Anyway, today was the grand opening of the new clubhouse at Chesley Lake Camp near Allenford.

Bill’s parents used to own a cottage at the camp and in 1968 & 69, Bill worked there as a teenager. We all know what it’s like being a teenager. Some of the best and most long-lasting memories of our lifetime. You can read a bit about the camp which started in 1948 by following this link.

The clubhouse was burned to the ground on Canada Day, 2017 and this has been a year of hard work and dedication for the committee members. Today was the Open House and celebration of their new building. Bill didn’t want to miss it. A lot of it was foreign to me even though he had brought me here to show me their former cottage a few years ago. I was never part of a ‘cottage/camp’ atmosphere but I’m sure I would have loved it! 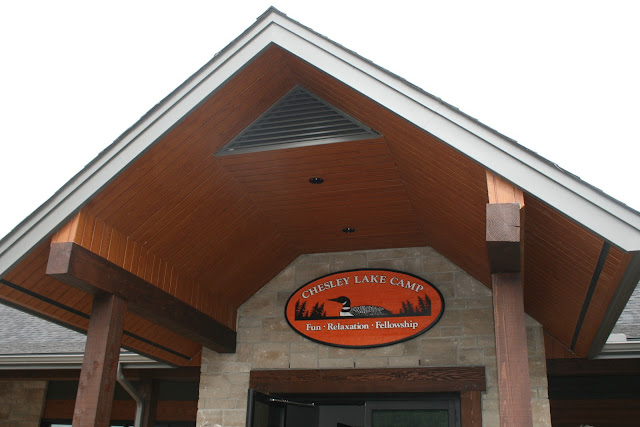 As we walked around the inside of this beautiful building, we veered towards the table where the ladies were serving cake. Awesome! There were at least 5 choices of slab cakes and although they all looked delicious, I skipped the yummy looking Red Velvet and went to my all-time favourite, double fudge chocolate. 😊 Our plan was to get a piece and find a couple of chairs before there were none left.

As we moved down the line, Bill’s eyes were scanning for one person in particular, Debra, a camp girlfriend from those teen years. Debbie was serving cake and it was cute to see the reunion. No camera in hand, of course. As a matter of fact, I graciously took Bill’s plate so he could give her a ‘proper hug’. (Blind Side w/Sandra Bullock) What a lovely lady and I’m sure she was a beautiful young gal too. Thank goodness that broke apart for obvious reasons!

We met Ken, Debbie’s husband, and hit it off very well. I still wasn’t in my element. It was very loud and I couldn’t follow Bill and Ken’s conservation so chatted a bit with Grace MacIntosh and come to find out she was the sister to Bill, a camp buddy of my Bill. The way Bill tells it, they were the only two boys working at the camp those summers. That would be interesting!
Bill enjoyed the cottage for sure and re-visited after he was first married and had children of his own until 1975 when his Dad sold it.

Bill and I went on a tour of the new building and then drove to the trailer park where Debbie and Ken have their Pilgrim travel trailer on a seasonal lot. Lucky 13, Debbie says.
We had a drink together in Twisted Sister (Ken!) glasses and toasted to old and dear friends. We all hope this is a long-lasting friendship again. I felt so at ease in this atmosphere, sitting around a trailer, I wonder why? Ha ha, that is my life and well I fit in best. We left at 6 and drove home to our little house sitter.

I didn’t know what supper was going to be but fried up some sausage and a cob of corn each to end with a banana split for me and just ice cream for Bill.

At 10, I was dropping my Kobo so knew it was time for bed. What a fabulous day!

Thank you for reading of our adventure today and thank you for any comments you feel obliged to leave.

Posted by Patsy Irene (Chillin' with Patsy) at 7:53 AM