Bill’s phone alarm went off at 5ish and he got up right away. We’ve never shied away from alarms, not since our working career have we hit ‘snooze’. It was always inevitable that we had a reason to rise at that time so we just did. Before he hit the shower, I had dropped off again and the next thing I heard was him wiping the walls and coming into the bedroom to get dressed.

I rolled over and dozed until 5:45 when he came to kiss me (us) goodbye. I couldn’t really drop off after that so at 6:45 opened my blind and got out of bed. It looked like a nice morning to walk even though there were heavy clouds resting over the horizon to the north and west. 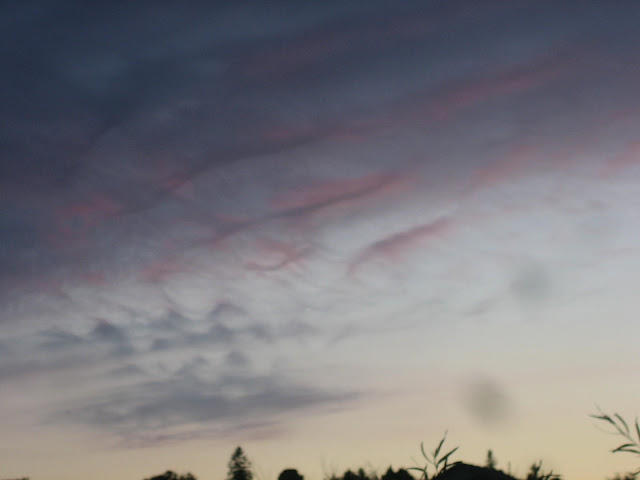 I put on Bill’s 2nd bright neon t-shirt and was my own safety patrol this morning. The walk took me to the north this time, thinking I’d pass the ‘doghouse’ and maybe go down the big hill to the bridge. 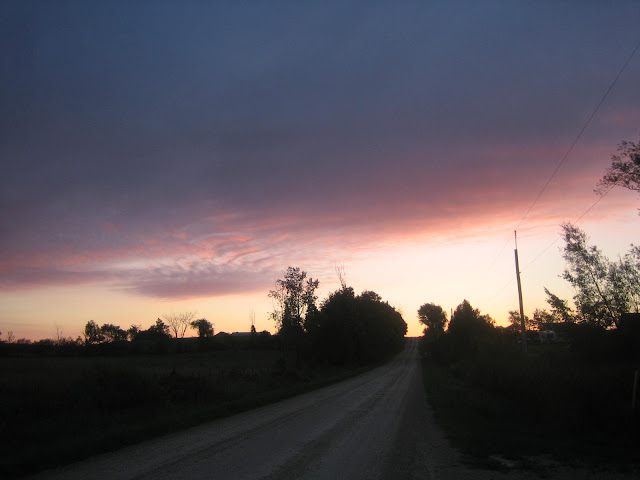 That didn’t happen but I did get half way down the hill and will do the whole trek another time. It was about 2 ½ miles I’d walked by the time I returned. The clouds were scattering all around and revealing the bright blue sky. Clemson was still up in bed so I made my tea and sat at my laptop seeing what our friends are up to. I could hear birds squacking behind me and when I turned around I saw a swarm of blue jays on the gravel, just off the edge of our patio mat.

It didn’t take long to understand why they were there and what they were doing. When Jess and Matt were here with Domi, the dog made a show of tipping his food dish over outside to get attention, we figure. 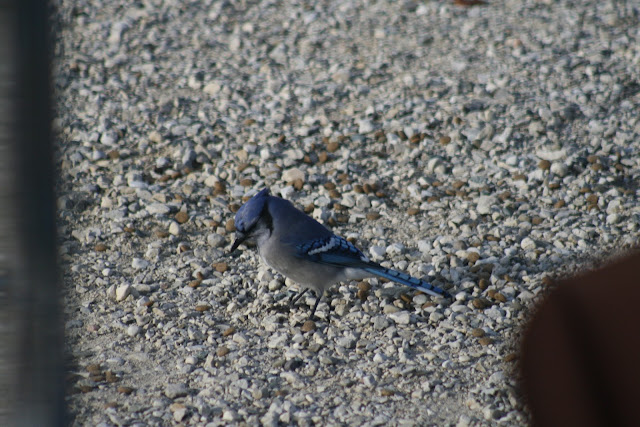 The food remained there and that is what the attraction was. Who knew that jays would like dog food? From my vantage point, I couldn’t get all 8 or 10 of them but I did capture a few close ups from my window. Silly birds.

I remembered that my hummingbird feeder was empty too so filled that up and noticed Chippy managed to climb the greased pole or jump from the fence post onto the greased iron hanger and was eating the bird seed. I shooed him away and placed some crinkly plastic wrapper on the post as a possible deterrent. I, obviously, need to move that pole when the ground is softer after a good rain. I rinsed out the bird bath and instead of seed this time, filled it with water. 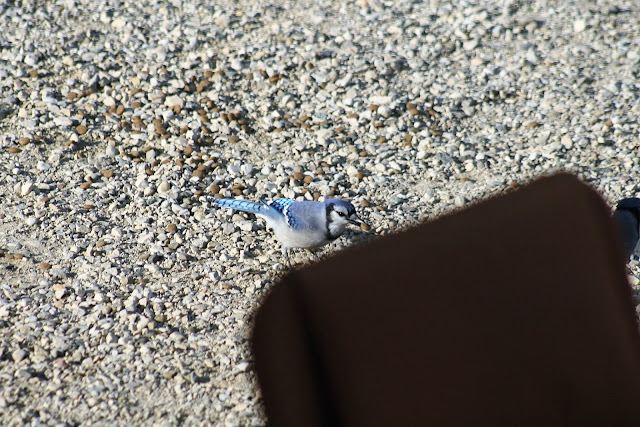 Some blue birds were trying to drink from it when it was empty, hint hint. Bill called around 10 to check in on us and see whether we had plans for Wednesday or was he right for turning down a job.


He was absolutely right, since I’ve made plans with Rob and Pat on Wednesday to get some parks booked. Also, with company possibly coming Thursday, Friday and then the weekend, there will be lots to do around here. The work is nice and so is the pay and he does enjoy it, but not at the expense of anything else.

I made myself a coffee at 10:30 and decided to get back into the pictures for my book. It is just an idea brewing right now but I want to be semi-prepared for when I’m totally ready. Yesterday, we finished designing our ‘rv’ cards and placed the order so they will be here in plenty of time. 500 cards for under $30 is awesome and they will have both phone #’s on this time and a nicer portrait picture. 😊

I worked away at my photos and finished the temporary compilation of October, November and December. Trying to choose a picture of each main place we visited as a summary.

Time for a break, outside. I went out at noon hour after having some egg salad and yogourt and took a grapefruit soda water with me I hadn’t heard whether the garbage truck had been so walked down the lane presuming it had. My wagon was tucked down where I left it and so I brought the emptied recycle bins back. 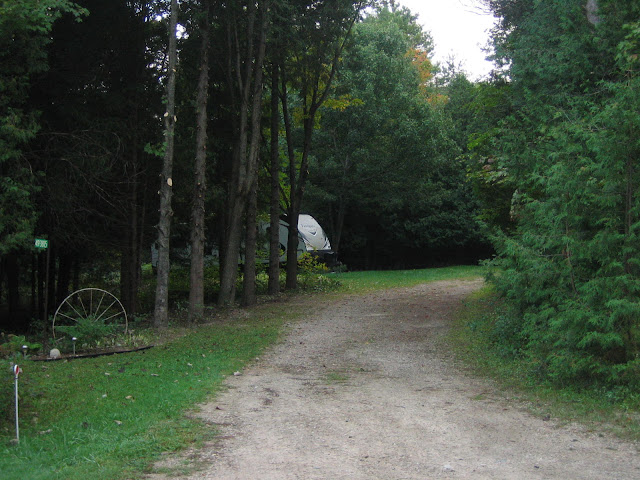 I set up my lounge chair in the shade and stretched out with my book. There was a nice breeze that made it very comfortable. By the time the sun had risen up over the Suite from the south, I was ready for some sun and tilted my chair into a full reclining position. I’m sure I dozed off for about 20 minutes and when I sat up it was as if on cue that my phone rang. Bill calling in between clients. After we chatted briefly, I rolled over, a definite ‘no can do’ in a gravity chair and got some sun on my back. Yes, I was in my bathing suit, dreaming of a beach, no doubt.

It was just after 3 when I came inside and Clemson was still up on the bed. While I was up there changing, he heard or more likely sensed me and followed me downstairs. We went out for his piddle and then he trotted down the corral hill for a walk. I watched to see how far he would go and he turned at the point and came up the other side. Such a little goof but I was so pleased that he didn’t trot off down the lane on his own. I followed and watched him go into the corral, which he never does.

Inside, I cut some cheddar and had some walnuts for a snack trying to plan a meal for my supper later. Clemson had a few pieces of cheese too and we sat together on the recliner. That lasted all of about 15 minutes with constant staring. Clemson steadfastly was trying to tell me that 3:45 was time for him to eat. It is easy to say ‘ignore him’ but it is painful. So, I got up and went outside, with Clemson on my heels. When he wanted in, I put him in and remained outside myself until 5. I fixed him! He went up to bed with no one to ogle.

When I fed him, I felt hungry enough to start my own supper. There is no name for it. Bacon, onion, green pepper, celery, mushrooms, zucchini, salami pieces and rice fried up in a pan. I added shredded mozzarella cheese to tie it all together and it was surprisingly good. For me. Bill wouldn’t like it at all, that’s why I do this kind of meal when I’m alone. I’m easier to please with just throwing things into a pan.

While eating, I finished the next story in my Jack Reacher book, Gone Tomorrow. After dishes and when I finish my post, I may start the next one. Worth Dying For. Bill asked me to search for a new series that supposedly starts tonight but with my search between 8 and 11 pm through all channels, it isn’t on tonight. He can look another time. This has been a nice leisurely day for me. A few walkabouts, the only commitment I needed to make was to take the garbage down to the road.

The rest of the day was walks, reading and oh, I cleaned the bunky. I’ve enjoyed the time to myself today. I hope you have had a good day too.

Thanks for stopping by. I love hearing from you if you wish to leave a comment.

Email ThisBlogThis!Share to TwitterShare to FacebookShare to Pinterest
Labels: sun soaking with a book, walking in the countryside
Location: N Line, West Grey, ON N0C, Canada