On Saturday, Sept. 8th Bill and I were up before 7 and out the door for a walk right away. Bill had a better night with Clemson only getting up once around 5:30. When we returned Brenda and Randy weren’t out of the bunky yet so we came in and made our coffee and tea. The problem with not writing throughout the day is that I forget the ‘order’ of the day but less words for you to read that way and I'll remember the good stuff anyway.

The four of us had breakfast together inside around 10:30, scrambled eggs and bacon and grapes to fill the little holes in our tummies. We put the dishes in the dishwasher, enjoying the break from hand washing etc. while company is here. Since Rob and Pat had offered their Cedar Creek up for the other girls and it was empty, we invited Randy and Brenda to use the bathroom facilities to wash up this morning. I thought the privacy would be nice for them.

When 12 noon rolled around, of course we weren’t hungry for lunch so Bill showed them the Hangar. They were both very impressed and happy that he had a nice area to work on his planes. They’d picked him up a 100’ extension cord at Costco, that was on sale, but refused to accept payment for it once they got here. Brenda said it was an early birthday gift. What a nice gesture!

At 12:30 Brenda and I drove over to Cheryl’s, next door, and she followed us in her vehicle to Durham. The clothing exchange started at 1 and even though we were a bit early, we helped Sandra, Jennifer and Pat set the clothes and some food out. Pat was really putting on a wonderful array of food choices for snacks, she was thrilled to be today’s host. Gayle, Donna and Michelle arrived soon after, Barb, Pat's next door neighbour and at 2:30 our 3 girlfriends from London arrived.


The clothes were spread out over Pat’s living and dining room and there was no shortage of choices. Wow! 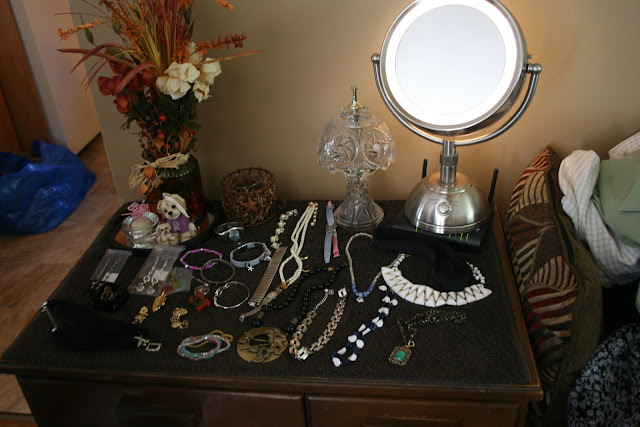 We had a blast from the time we arrived until the last of us left at 5:30. Laurie A., Laurie B. and Heather followed us to the Ridge. We sat around with a drink for a while and Bill lit the Weber at 7. We’d been munching all afternoon but the boys hadn’t eaten anything since breakfast.

We did burgers and sausage and I wish I’d taken a picture of the full grill. I cooked corn on the cob inside and when it was ready, we all moved inside to eat. The air was that cool plus dusk was approaching fast. Supper was good, everyone had plenty to
eat. Laurie B. provided the wine and Laurie A. brought mini cupcakes for dessert.

When they were brought in and we were ready, we all sang Happy Birthday to Laurie B. The cupcakes were her 'cake' without candles. Her special day is on Tuesday. We cleaned up and moved outside with lots of layers to enjoy the fire that Bill had started earlier.

The campfire is always more fun with company and between Bill (and Brenda, his fill-in) we were warm all night. Laurie B. and Heather were bundled up in their sleeping bags like little cocoons and the warmest of the bunch, I’m sure. At 11:30, Bill and I said goodnight and I believe within 10 minutes the rest of them followed suit. It was a cold night, around 6C/44F so I worried about the ‘children in the bunky’. Rob turned the furnace on for the girls in their fiver.

It was a great day and now it is Sunday, Sept. 9th. The temperature had risen to a balmy 8C/48F and it was windy when we got up at 7:50 am. We slept in after being up again 3 times through the night with Clemson. Well, Bill was up, I was just awake a couple of those times. Poor guys. Snoozes will be in order today for both of them. We saw Laurie A. walking out the lane and down the road at 8 so texted her that coffee was ready when they were.

The girls packed up the bedding, folded the couch up and loaded Laurie’s Sante Fe before joining us for coffee and tea. Brenda had already taken an early walk at 7 so her and Randy joined us as well around 8:30. I began making breakfast around 9. Hash browns in tin foil on the barbecue and mini sausages inside in the electric frying pan and toast. I think I actually managed everything quite well while Bill kept everyone in conversation.

We ate by 9:45 which meant they would have a later departure than they’d planned. By the time we were cleaned up again and the dishwasher loaded, it was closer to 11:30 when they pulled out. I felt bad for the delay.  Sorry, Laurie A.!


The two Laurie’s’ had ‘homework’ for their jobs to finish before Monday morning. Just another reason that I’m grateful for retirement and the type of employment I had. No weekend work was necessary, ever.

We were so happy that all 5 of our guests were able to commit to the weekend sleepover.

It made it so much nicer for them, not having the long drive of 2 ½ hours in one day. They were able to let their hair down and enjoy relaxing with us. This was a hoot!

After they drove off, Bill took Black Beauty over to the Acreage for water and I went through my bag of ‘new to me’ clothes. I dropped off 2 very bulging bags and returned with only 1, so kudos to me. You just never know what you’ll find and it is all about the comradery and the thrill of the ‘hunt’. 😊

Bill and I went out and pail by pail by pail shifted the car shelter to the east, more off the grass at the west end. Now it will be 90% on the gravel and the grass can be cut easily. Inside, Bill hung the Richard’s Crest that he got from Dad’s and I looked after the bed in the bunky for the next guests. It needed a bit of air so I pumped that up before taking a walk down to the corner. Down time and it was cool but really refreshing.

I noticed more beautiful wild flowers but instead of picking them, I just captured them on my camera. When the girls arrived at the exchange yesterday, they brought a beautiful bouquet of fresh flowers for both Pat and I. Such a sweet gesture! Mine are looking great in our vase from Los Algodones, Mexico. Bill had the idea that he’d work in the Hangar for a bit but after puttering around, we both admitted defeat and sat in our recliners. You know where that led!

The day zipped by and before long it was time for supper. I actually didn’t even snooze like I thought I would but my sweeties did. At 6 I got the leftover burgers out of the fridge and warmed 3 up for supper. There were a couple half cobs of corn that didn’t get eaten last night as well so I warmed them up. Bill had 2 burgers and I had 1 with the corn. It was simple, fast and filling. After dishes, I downloaded pictures and finished this post.

Another great day has come and gone and just like that it means the weekend was over too. Now it will warm up, or something like that. There is a warming trend coming after tomorrow. I hope you’ve enjoyed your weekend too, even half as much as we have.

I took some pictures of wild flowers this morning but those pictures will be posted tomorrow. I've probably already put you to sleep!

Thank you for taking the time to see what we’ve been up to. I’d love to hear from you!