Howling Winds, Can You See Me Now? Laundry Done, Indoor Cleaning and Visitors

I could hear the wind whipping around outside again (or still) on Tuesday, Sept. 25th when I took my ear plugs out. No rain pattering on the roof though so I did my stretches and decided to get up around 7. Again, the voice from beside me, when I thought he was asleep, “You’re not walking in that wind, are you?”. I know it comes from concern and no sooner did Bill say that when heavier gusts emphasized the fact around the bedroom slide-out. “Hmm, maybe not”, was my reply.

I got up and got dressed anyway, disappointed in having to break routine. I know the time will come when rain or the other stuff will put a damper on my walks, but it was too soon! Bill came downstairs with me and I could see a few raindrops on the windows to the west of the Suite. Sticking my head out the door and seeing that the thermometer was reading 59F/15C and the rain had stopped, I decided to go anyway. “I’m only going to the corner this morning” satisfied Bill too.

Well, it wasn’t as bad as I thought once I got out there and I was happy to get at least ½ mile in before I returned home again. I got an opportunity to try out the new safety vest and of course, had to take a selfie or two. The bus driver passed me as I was about to turn into our laneway and we waved, as usual. He is wearing the same safety vest. 😊

Inside, I made our coffee and tea and we sat reading while we drank them. This is the day for laundry and because we have a model airplane filling up the back of the Rav4, Bill decided to come with me in B.B. and help out today. That’s nice, I thought. I wouldn’t be hanging the clothes on the line today with 56% rain in the forecast so two to fold is faster.

We stopped at the Post Office on the way into Durham so I could mail a letter to New York and then at the bank to get cash out for the change machine at the laundromat. Only 2 loads today, I guess we wore the same thing (work clothes) over and over this past week. It doesn’t take long to dry them in the big dryers, 20 minutes did the trick for 2 machines. They were folded and we were on our way home by 10:30.

I made myself a coffee and sat at my laptop while Bill drove over to the Acreage to get water for our tank. With both of us having showers today or tomorrow, I would be low while he is away. I’m pleased that it is at least mild outside, not that I have anything to do now. It is probably too wet to clean up that brush so I can work at that this week on my own. Hopefully, I can get into my book creation again today.

Yesterday, when I went for a walk, down in our front field I saw a critter, dead, close to the fence line. Aah, I wasn’t sure what it was so I texted Bill to come down and see it. He thinks it is a young gopher, which makes sense. Too young to have a heart attack (says CSI me!) but we can’t see any visible cause as he lays on his back. I wouldn’t want to get on the wrong side of those teeth or those toe nails! Bill will go down today either with gloves, a shovel or both to dispose of it. I did take a picture but just wanted you to see his sharp (not as in oolalah) ‘accessories’.

Last year while we visited the Las Vegas ‘Pawn Stars’ shop, we got offered free parking if we filled out a coupon. We did and of course there is always a catch. First off, we need to book an appearance in Las Vegas and stay for a 90-minute spiel on buying into a hotel time share. Again, as always there is NO obligation and NO undo pressure since we don’t stay in hotels. We do receive passes to a few very nice things that we can use at any time. So, we called today to make our ‘reservation’ at the presentation. Never fun but no big deal either.

So, we were getting hungry and without bacon or mini sausages in the place, we just opted for eggs, sunny side up and toast for dipping. Hey, works for both of us! Bill went down and picked up some of the brush in the pile while I fried up the eggs, calling to him when they were ready. It was just as we finished eating that Bill noticed a white Jeep coming up the drive. Markings on the hood and door indicated TNT Security. Bill’s nephew, Todd, owns this business but it was his sister, Carol, and brother-in-law, Brian who got out of the vehicle.

What a lovely surprise. Turns out they were on their way to Collingwood and found themselves doing through Priceville. Lucky for us! Brian had never been up here before and Carol, only once. Bill gave them a quick tour of the sheds and filled Brian in on the story of how the Ridge came to be. We walked up so I could show them my vegetable garden. It was just before lunch but all they wanted was a coffee. We moved inside the Suite and I obliged, so simple with the Keurig. 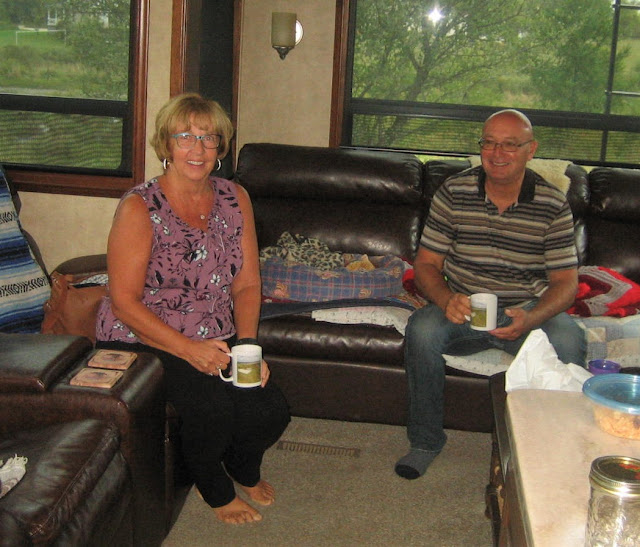 We had a lovely visit, catching up on each other’s summer since we’ve seen them last. It was 1:30 when Carol said that they needed to get on the road as they had a stop at a winery on the way. It was mild enough outside at 67F/20C even though the sun never made an appearance, unlike Carol’s last visit here on July 1st, 2016. I miss that traditional gathering with the 6 of us and need to consider giving it a go again.

Bill took the Rav into town to fill it with fuel, so nice to see the price is down around $1.16/gal for who knows how long. Good timing for us today. I did the dishes up and tried to wrap my head around what to have for supper. Spaghetti it is, with real noodles as I don’t have any squash in the fridge. Oh well, the sauce is homemade so that makes up for it! I have a number of medium sized tomatoes so used them for the sauce and will add mushrooms and ground beef.

When I finished that, I used a bag of rhubarb from the freezer and made a dish of Rhubarb Crisp for dessert tonight. I feel good about making things now with little or no sugar, trying to do things right for both of us. I don’t want to stop baking because then I find we just crave things. This way I can answer the call “what have we got to munch on?” and offer up something rather than chips or chocolate.

At 4:30, Clemson wanted out for a piddle after eating his early supper so I went out with him. He did his business and wanted back in. I decided to go for another walk to the corner. It was so mild out and I short changed my walk this morning. By the time I was about 100’ from the corner, the sprinkles of rain began more earnestly and my glasses were covered. I turned around and picked up the pace. It felt good to get out for a bit before settling inside for the evening.

Supper was ready at 6:15 and we both enjoyed it very much. It was a different flavor for spaghetti but I’m proud to have made the sauce myself. Less sugar, carbs and salt. As we were finishing up our meal, the convection oven chimed that our dessert was ready. After dishes and after I sent my post off, we’ll see how it tastes. The ice cream is all gone but I’m a lover of cream on any fruit and tonight will be no exception.

This has been a great day, even though it was mostly inside. We’ve enjoyed it together before Bill goes to work. Tonight is our night for good tv and after wrestling last night with 3, 4 5 new seasonal shows and our PVR, tonight will be another one. Why the networks can’t get together and spread them out through the week, I’ll never understand.

I hope your day was a good one. Thank you for taking a peek into our day today.

Posted by Patsy Irene (Chillin' with Patsy) at 5:23 PM