Hanging Around, Bunky Cleaning, A/C Back On, Hangar Touchup, Visit with Donna

On Sunday, Sept. 2nd I slept in until 7:30 and slipped out of bed trying not to disturb my boys. Bill has been sleeping on his back lately since his right hip has been bothering him and either side is uncomfortable for him. When he sleeps on his back, he snores. It doesn’t bother me through the night because I have my ear plugs in and I’m sleeping. It is my indication though of how soundly he is sleeping and more reason not to wake him.
I wasn’t downstairs long, maybe half hour and he also got up. I had a blog post to finish and set about doing that. It took longer than I’d hoped because I wanted the pictures in a collage and that takes time, back and forth to my Samsung. Downloading pics from my phone is a slow process compared to either of my cameras. Eventually, I got it finished but not until Bill and I had finished our tea and coffee and he’d gone out to work in the Hangar.

Before we got into too much, I made our breakfast around 11 and got that out of the way. Can’t believe how fast the day goes when you sleep in a bit. It is a hot, hot day already at noon hour so I closed things up and turned the a/c on. If we are going to be working outside, we’ll need a place to cool down. There will be lots of water inhaled today everywhere on this beautiful Labour Day weekend.

There was something Bill was trying to figure out, regarding the way the doors closed leaving some gaps, so Rob graciously gave up some of his Sunday to come over and assist. Two heads are better than one, after all. The gaps needed to be closed before winter sets in so Bill’s ‘toys’ remain dry. I had my own plans and that was to empty, for the most part, the Roost to clean it for company on the upcoming weekend. I get excited, like a little kid when there is something I’m looking forward to and this is one of those times.
First, I took the cleaner out and gave the Restroom a full out cleaning. It will be used frequently. Then in the bunky, I added some air to the blowup queen mattress just for good measure, wiped everything down, washed windows and planned bedding for our guests. I need enough for 2 beds. The queen futon in the bunky and a double in the Cedar Creek. We, of course, are praying for great weather. The first of our company will arrive on Friday evening and the rest on Saturday.

Bill took a run into Hanover for a few things and he and Rob will meet up in Durham and return this afternoon. Inside, I boiled some sugar water for the hummers and outside filled the finch feeder and my other bird feeder. Gotta keep the birds around! It was my fluke that I’d already had a container of hummer feed in the fridge but now I have plenty to last the month. Already the finches and hummers are filling their little faces, so they’re not mad at me at least.

While the boys were working on the Hangar, I slipped down and put my 2 bags of purged clothing in the back seat of Black Beauty. When Bill takes Rob home, they will stay at Pat’s until the clothing exchange. She will be our hostess this time! I thought I would need space in the Rav4 because of taking 4 girls and their clothing on Saturday but it has been confirmed that 3 of the 4 girls from London will drive directly to Durham and then follow us home to the Ridge afterwards. They are spending the night here with us.

I finished my jobs outside and then other than making sure the guys had cold water, I was on my own. Donna had offered me some Avon items that she no longer uses so I drove over to the Acreage and went through those. I’m glad I did because I still use a fair number of the products. Back at the Ridge, after taking the guys a cold drink, I sat in the shade of the cherry tree with my book  My drink of the day was a Pomegranate Cherry soda water and when you’re thirsty for something other than water, on a hot day, it went down pretty good.

At 5, the boys packed things up and Bill drove Rob home. I took one look at Bill when he’d finished cleaning up the scraps and knew he was destined for a shower. While he was almost finished in the bathroom, I lit the Weber and offered to grill supper tonight. I had bone-in butt chops out of the freezer and made a Caesar salad for our side dish. I don’t do the grilling very often, hardly ever, but they turned out fine with Bill’s direction. He set the table and we cleaned up dishes together.

Bill turned tv on and we watched the last of the movie Twister. We’ve seen it so many times I could almost recite Helen Hunt’s part, well not quite. It is 75F/24C outside at a few minutes past 8. There isn’t enough of a breeze to reach in the windows so we’re leaving the a/c on for sleeping tonight. For dessert, we decided to finish the cheesecake cupcakes. I figure my sweetie will be asleep in no time, yup his eyes are drifting as I type. 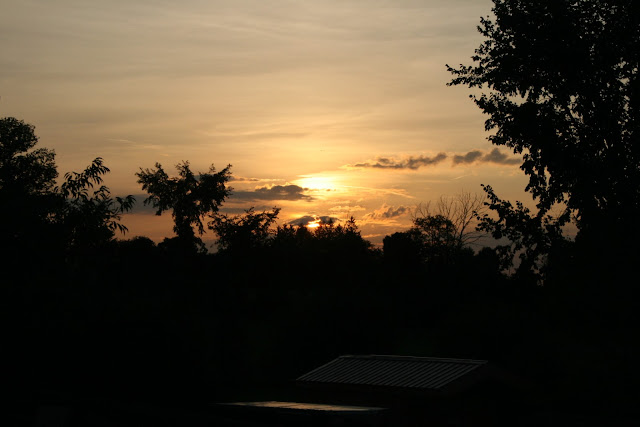 This has been a good day. Bill is feeling better about the Hangar doors and can focus on fixing his Stinson tomorrow. I hope you’ve had a good day too.

Thank you for stopping by today to see what we’re up to.

Posted by Patsy Irene (Chillin' with Patsy) at 6:53 PM