Arizona Market, Cooler Day, Meeting a Blurker, A Little One!

I woke on Friday, Dec. 14th when I heard Clemson jump off the bed to go out. Checking the clock, I saw that it was 5 am. Although I wasn’t ready to get up yet, I couldn’t seem to drop back off to sleep. After tossing and turning for the next hour with maybe a bit of dozing in there, I finally got up at 6:15. I got dressed and came downstairs to finish my blog from yesterday. Bill had set the Keurig to come on at 6 so it was quick to make my tea.

Knowing that Clemson had already been out, after my blog was published, I went for a walk. Again, it was nippy out there at 51F/10C. That is the coldest it has been for a while but at least the days warm up nicely. Today, it was a full cloudy sky but wow, was that sky ever beautiful! According to my Dad of years gone by, ‘red sky in the morning, sailors take warning’ and there was a pink sky to the north, south east and west.

I put the move on a bit, increasing my step from other walks because I needed to warm up. There is one other lady who walks here at the same time. We’ve greeted each other and today she said ‘we’re the only ones!’ The park isn’t full enough, I guess, for the usual park walkers to be out and about. I turned and watched her walk away and realized that she was walking backwards. Hmm, that must be of some benefit but I’d be afraid I’d end up head over heels (or worse!).

I met Rob as he walked their garbage up and then at one corner, I saw him go by. I’d already done most of my walk so jogged to catch up and we returned together to our sites. Our plan today was to go into the Arizona Market plus a couple of other stops. We had poached eggs on toast because it is easy and healthy, cleaned up and met Rob and Pat at their truck. It was 9 and we were on our way. 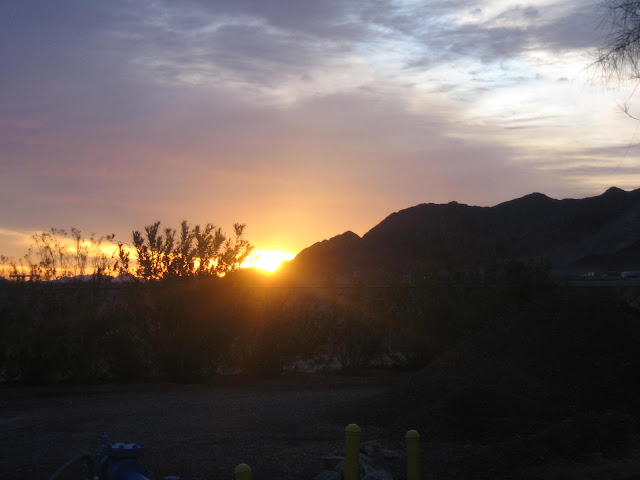 It was quite cool out and it was even colder when we got inside the tents. I should have bundled up a bit better but nevertheless, we split up agreeing to meet in an hour. The vendor count was much less than last winter and we found out that it was down from 400+ to 150. Hmm, something has happened. Maybe there will be none when we return next year. We wandered around and found a few things for some small jobs around the Suite.

From there, we drove to a Liquor Store. Bill has been trying to find a source to buy his Appleton’s Rum. No department or grocery stores in Az seem to carry it. Boy, was this ever a haul for all of us. The shop owner was a very obliging guy and Pat found what she was looking for (teehee, I won’t post the name of it) and when we were shown the ‘specials’ we kind of went crazy. Certain liquour was on sale for 50% off and wine were 4 for $10. Hello! We stocked up and came home with two bags for $34.

After that we went to Big Lots! And Lowe’s. Bill and I found some icicle lights that I wanted for on the ground around the rv. Something that would light up the area when we step out in the dark. A lot of people are doing that and it makes sense with us having and taking Clemson out at night. We found a string for a great price and an extra extension cord. At Lowe’s I found 3 large Christmas balls to hang from our ficus tree. 50% discounts were offered on all Christmas products.

Rob drove to the U.S.P.O. for me so I could buy stamps for our Christmas cards. I needed to get them in the mail soon! Bill made himself a sandwich and I opened a carton of Butternut Squash soup for lunch. Yum, it was delicious and I have another bowl for tomorrow. Bill and Clemson hit the recliners and I went for a walk. Pat was also resting so declined my offer to join me. We wee all yawning on the way home in the truck but I’d found a second wind.

Since I was alone, when I got to the clubhouse, I stopped in to work on the jigsaw puzzle. I am assuming that whoever started the puzzle has left the park as I’m the only person putting new pieces in now. No problem, I’m enjoying the challenge and finding enough pieces to keep me entertained at least.

At 3 I walked back and got a text from Elva Shannon pertaining to our Happy Hour time zone. This park stays on Arizona time so we do the same.

I notified Pat and Rob that we would host today as we were expecting company. Yay! I was excited to meet someone who was a friend of a friend and someone who reads my blog posts. We call those people, Blurkers. It is a compliment. Elva arrived by 4, alone, and although she said she wasn’t feeling 100% she stayed for a short visit, long enough for us to learn a bit about each other.

We had a nice chit chat before she had to leave. When I said goodbye I stressed that we’d like to meet Jerry and that we definitely hope she comes back. It is always fun to meet new people.

Rob and Pat headed home soon after, the air became chillier by the minute. Bill had hung our Christmas balls in the tree and spread the icicle lights around the Suite.  They will make a huge difference, adding necessary light where we walk. We watched some tv inside until 6 when he lit the barbecue and grilled our burgers and bacon.

He’d cut cheese for melting on them and inside, I got the condiments ready. Burgers are a nice, easy meal but they are always so very tasty, loaded. I didn’t worry about salad tonight, we’ll top it off with some ice cream later. 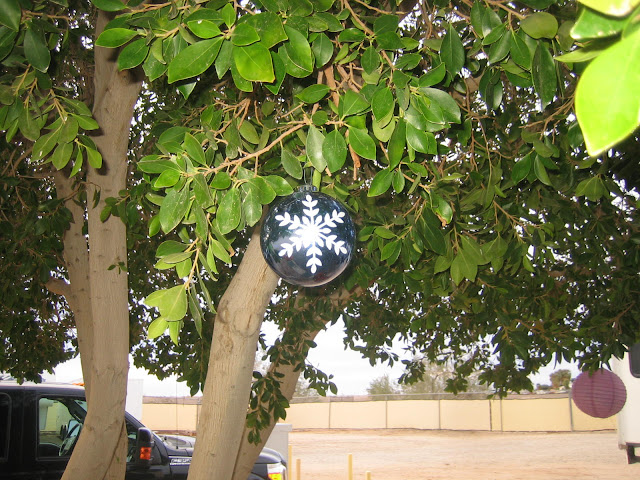 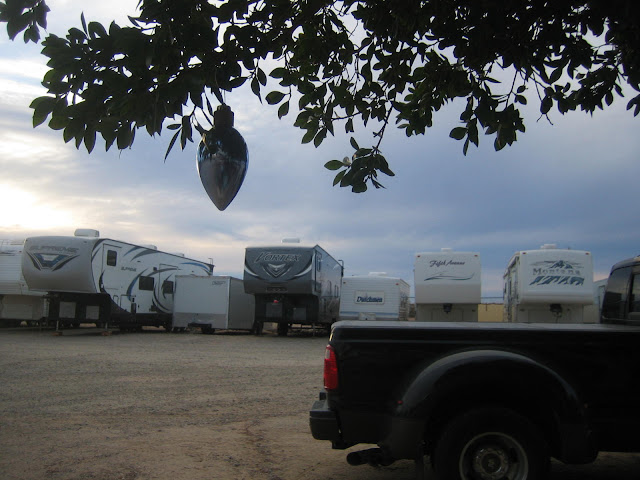 Supper was great and we were all done dishes by 6:45. This has been a cooler day than we like but the sunny skies seem to determine that. Tomorrow will be better with a high of 23C/74F and full sun. Bring it on! I hope you have had a great day too and I hope you’ve enjoyed your visit and meeting Elva like the rest of us did.

Thank you for reading!

Posted by Patsy Irene (Chillin' with Patsy) at 8:59 PM